Sunday was our day off. Taking a day of rest was good for all of us. As we enjoyed the amenities of the Hostel at which we were staying, the peacock put on a magnificent show.

This mission would be impossible without the support of the local support from Rotarians and their friends living in Guatemala.

Carlos Ramirez-Portilla was a moving force behind getting Rotaplast to come to Guatemala.  He started 17 years ago working with Rotaplast. The first mission was 15 years ago and this mission marks the 15th Anniversary of Rotaplast in Guatemala.

Elisa Sinibaldi de Ramirez-Portilla oversaw the extremely effective marketing campaign that resulted in so many people coming to see if Rotaplast could assist with their medical condition.

The Administrator of Hilario Galindo Hospital that is allowing Rotaplast to use the facility is Sergio Lopez. 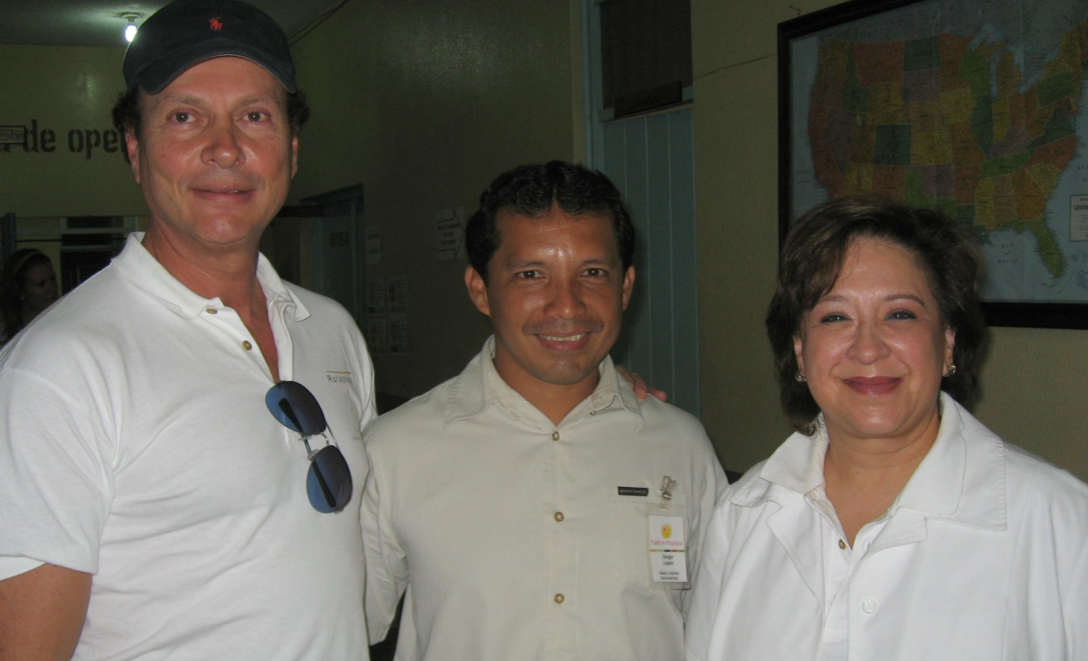 Silvana Ayuso (middle) is the local Rotary Club liaison and she has truly been our guardian. She was always by our side as translator, friend, tour guide, problem solver and concierge. We would be lost without her!

Spencer Buchanan – El Hefe of Errands is a local Rotarian who lives in Guatemala City. For the opening of the clinic and the first week, he came to Retalhuleu with his driver and took Tom and Tony around town getting needed supplies. When Spencer had to return to Guatemala City, he left his driver and car for our use. Spencer was originally from Texas, came to Guatemala 40 years ago to farm and ended up staying.  Thanks for getting the supplies . . . . especially the diapers!

Tony Bischof is a Rotarian in Retalhuleu and the President of the Board of Directors of the Hilario Galindo Hospital Rotaplast is using. The hospital was originally built by Hilario Galindo in the late 1950’s along with a school, but it had been abandoned and fallen into disuse. Tony and his colleagues facilitated re-opening and renovating the Hospital so that Rotaplast could have a place to perform surgeries and the local residents would have a medical facility.

Isabelly Chow & Mayling Alverado also worked as translators during the initial opening of the  clinic:

There were so many other Rotarians and friends of Rotarians provided assistance. Below are a few of the locals that my camera caught:

DISCLAIMER:  Please note that my camera may not have caught all who helped in those first hectic days. If you helped and I didn’t catch you in a picture, my apologies. Rotaplast is thankful for all the support of so many in Retalhuleu without the support of the Guatemalan people this mission could not happen.

Stay tuned for before & after pictures & a nod to the local medical staff who have been so invaluable.

Today we can start to show you some of the work that is being done. Below are before and after photos of some of the operations. Please note that the post-operation photos are taken either immediately aft... Read More »

Again, we were greeted by a volcanic burp from the Santiagito Volcano. LOCAL MEDICAL SUPPORT This Rotaplast Mission has also depended on local nurses both in the OR and the PACU units for support.  Below ... Read More »

Every patient, young or old, is given a handmade blanket. So we must give a shout out and a thank you to Wrap-A-Smile by the International Quilters, sponsored by the Rotary Club of Wells, Maine. The quilte... Read More »