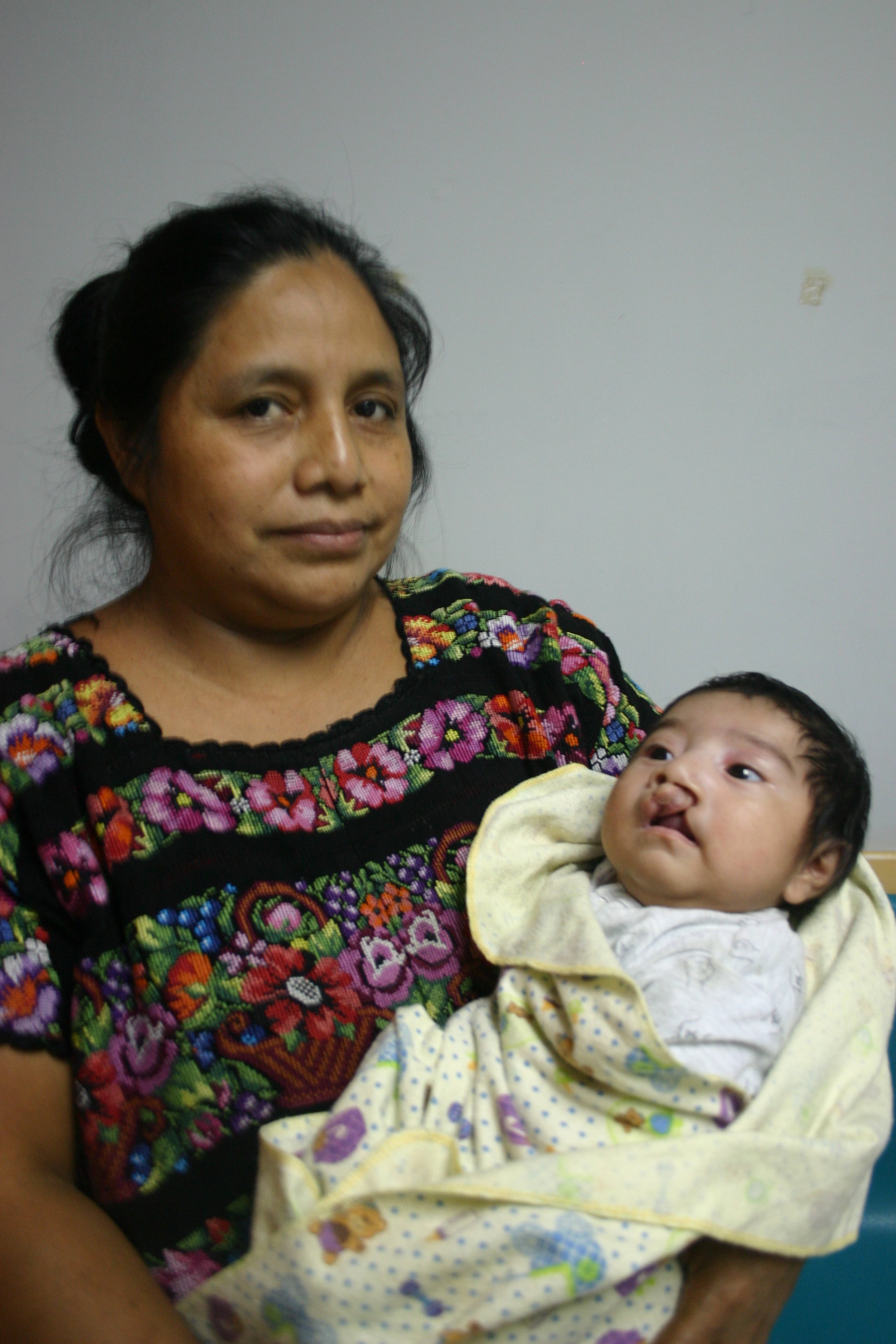 Excitement bubbled on the ward before surgeries began today. 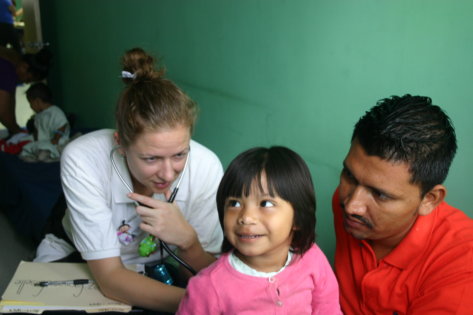 Andrea, a Pediatrician, is one of our best patient advocates. She works tirelessly to ensure that patients and family members are kept in the loop throughout their stay at the hospital. 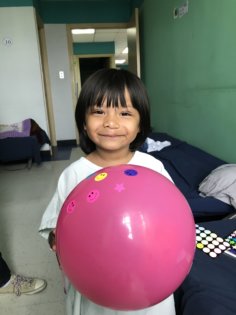 Michelle, our ward coordinator, makes sure the kiddos have lots of stickers and toys to keep them busy and smiling. 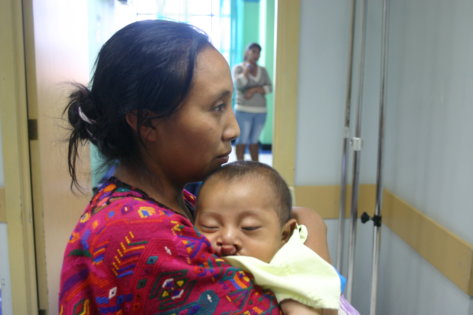 Meet Kevin. He is 6 months old, and has a bilateral cleft lip. His family lives eight hours by bus from Guatemala City in a small town called Chichicastenango. Kevin’s mother only speaks the local dialect, one of twenty individual Spanish dialects specific to Guatemala. This language barrier creates an extra challenge for us to communicate with her. Luckily Kevin’s father has been able to come to the hospital and help us communicate with his wife.

Kevin presented with a protruding lip, creating a greater challenge for our surgeons. For this reason a band was applied on day one of surgery to apply pressure to his lip in order to help realign this region before his bilateral lip repair. For two days Kevin was extremely uncomfortable with the band and had little to eat. As a team we decided to move his surgery up, and limit the amount of time with the band. 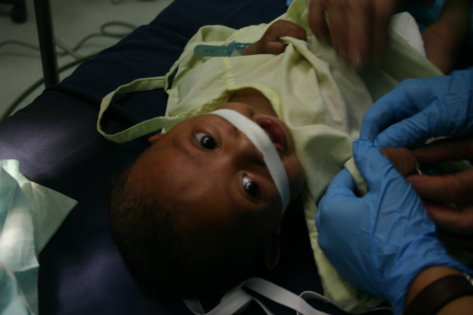 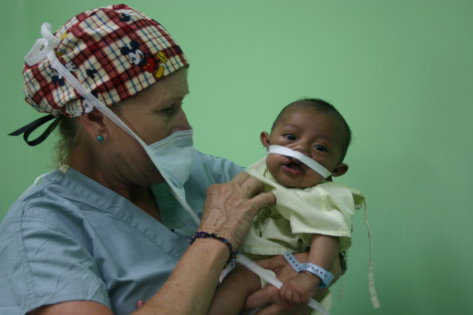 The pictures below show Kevin and his family after surgery. Silvana, our local Rotarian, helps to translate to dad how the surgery went and that Kevin needs to be fed since he has not eaten for many hours. 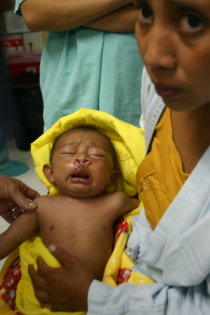 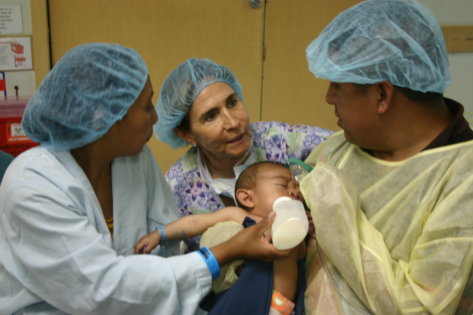 After a three day stay at the hospital, Kevin and his family get to head back to Chichicastenango.

Alexander stands out from the rest of the patients.  He is 16 years old, and was not born with any facial malformations. Two years ago he was in a massive car accident, where a drunk diver hit him and some of his friends on their motorcycles, sending him flying into a tree. A branch pierced him below the chin and bored a hole in his palate. This is not his first rodeo in the operating room, after the accident he was hospitalized and needed to breath through a tube in his trachea due to massive facial and oral injuries. 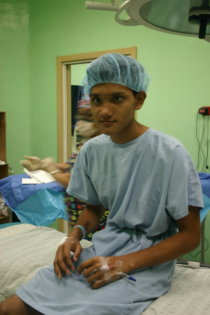 Above is Alexander sitting on the operating room table, a mixture of nervousness and excitement on his face.

Many of these operations require multiple physicians. Ron and Rick put their heads together in order to devise their plan in the operating room. 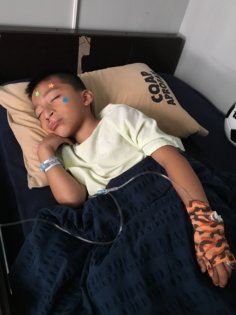 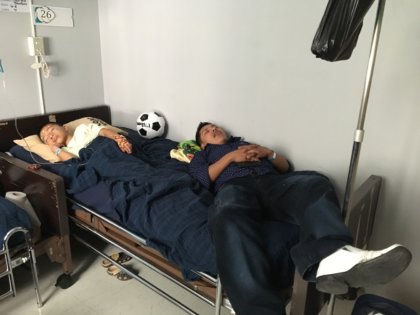 Surgery is both mentally and physically exhausting for the patient and family. 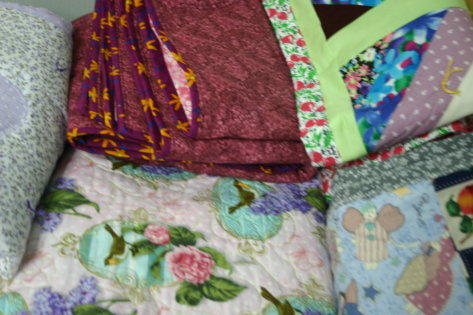 We wrap each child in a handmade quilt after each surgery. These were made by Rotarians from all over the United States.

Today some of the team was starting to feel the long days of work we have put in, myself included. I was tempted to have someone swaddle me in one of these beautiful blankets.

Medical volunteers are a special breed. Rotaplast volunteers vary in size, gender, profession, years of experience in their field, and number of medical missions with Rotaplast and other organizations. Oft... Read More »

On our last two days of surgery we saw 12 patients, some with multiple procedures. Our team has really gotten into the groove of working together. These past two days have gone extremely smoothly. Josue i... Read More »