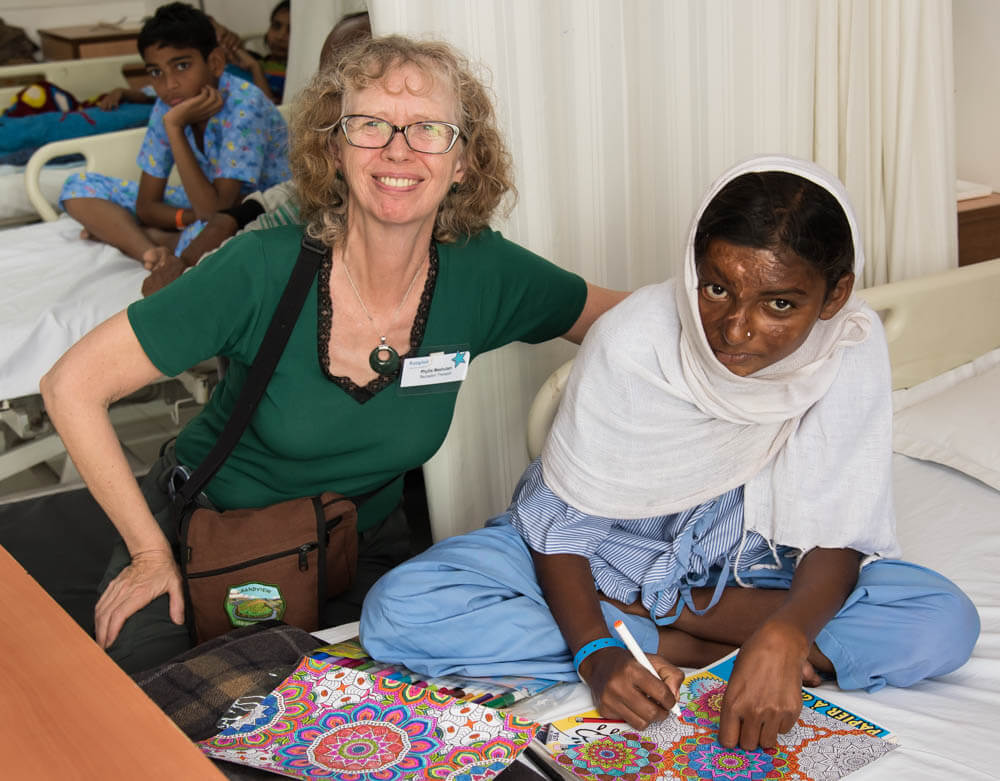 Phyllis Meshulam is a poet teacher with California Poets in the Schools, and came on the mission as the recreation therapist, charged with keeping the children entertained while awaiting their surgery. On Wednesday afternoon after most of the younger children had gone down to the operating room, she thought to ask the older kids if any of them would like to write a story.

Only Leelawati (pictured above) was interested. She filled the page with Hindi characters lineated like a poem. Phyllis wondered if it was. One of the nurses said that it was Hindu prayer and an orderly sang it for everyone.

Phyllis thought it might work to write a group poem. She just happened to have Juan Felipe Herrera’s,”Let Us Gather in a Flourishing Way” on her phone. She read it to the group and, considering that levels of English comprehension varied, the attention paid to the poem was quite impressive, including several staff who gathered to listen.

Phyllis gave the children, all of whom by then were really interested, a first line: “Let us gather on the ward.” She then invited the kids to contribute a hope, a companion, a dream that they bring with them to the ward. One of the nurses helped to translate. It worked so well, Phyllis did it again the next day resulting in the poem below. Take a look and see what Rotaplast patients Abhishek, Lokesh and Leelawati had on their minds.

Let us gather on the ward

with our hopes for happiness from the surgery

our hopes for no more being laughed at

for not being hungry anymore

to drink juice for health and vegetables, too

for doctors to care for you

before and after the surgery

courage and confidence for the surgery.

Let us draw some things

play and walk out of the room

watch television and play with toys.

grandparents and other relations

my mother’s father who already died.

Let us dream of being software engineers

and singing songs to successful surgery.

Dharmedra and Soni said they were very happy that they saw the newspaper advertisement for the Rotaplast mission. Divyanshi is their first child, born with a cleft lip and palate. At five months, he was re... Read More »

From Rachel: When I learned I would be traveling to Faridabad, India with Rotaplast I was ecstatic, but being a first-time team member I had no idea what was in-store. I knew I would complete this mission ... Read More »

Prince was born two years ago with an anatomical anomaly including the lack of an eye socket and bone structure on the left side of his face, a cataract in his right eye and a cleft lip. Despite being blin... Read More »