Rotaplast International, Inc. was founded in 1992 by Dr. Angelo Capozzi and the then Rotary Club President Peter Lagarias in collaboration with the Rotary Club of San Francisco to facilitate a surgical program in La Serena, Chile to treat children with the cleft lip and palate anomaly who would otherwise not receive surgical intervention. This initial historic mission took place in January of 1993. 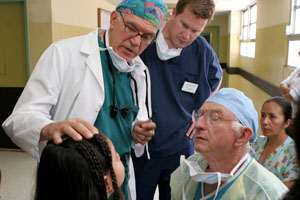 As a project of the Rotary Club of San Francisco, and for the first three years of its existence, Rotaplast completed one surgical mission a year. The following two years, Rotaplast completed two missions a year. In 1996, Rotaplast became a separate non-profit corporation and has since consistently expanded its number of annual missions. In February 2015, Rotaplast sent its 200th mission and to date has served over 17,000 children. Twenty-six countries have hosted Rotaplast teams, including Vietnam, Colombia, Chile, Argentina, Mexico, Venezuela, Bolivia, Peru, Guatemala, Ecuador, El Salvador, Romania, China, Ethiopia, India, Nepal, Brazil, Bangladesh, Mali, Togo, Liberia, Dominican Republic, Egypt, Tanzania, Myanmar and the Philippines. Hundreds of medical and non-medical volunteers who give their valuable time, and generous organizations such as hospitals and medical equipment companies which give supplies, account for the consistent success and expansion of Rotaplast missions.

Rotaplast would not exist without funding provided by partners. Although a San Francisco-based organization, Rotaplast works nationally and internationally by partnering with Rotary Clubs, other organizations, and individuals across the United States, Canada and mission sites. It provides a vehicle for medical professionals and non-medical volunteers to actively engage in projects that build international friendships and promote goodwill and understanding among the peoples of the world.