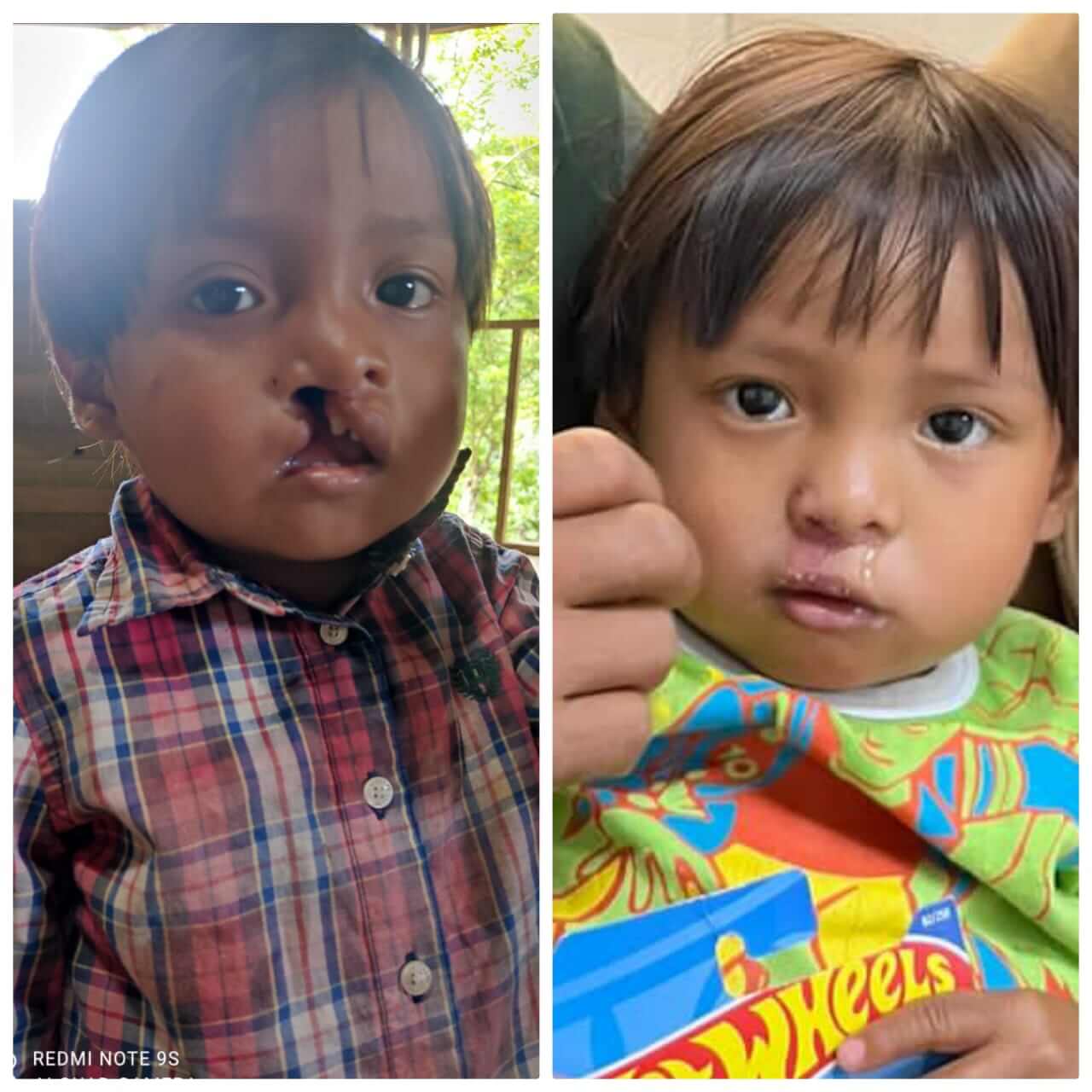 This is our last day here (Thursday, August 4).  There will be no surgeries today.  Patients that were staying locally were asked to come back today for a final check of their surgical sites.  For some, their surgery was a week ago or more.  The clinic was to open at 9am.  Three doctors arrived earlier to check on the two remaining patients who had been admitted earlier in the week.  I was able to go with them.

We were surprised when we arrived at the hospital before 8am to see the waiting area full of our patients and their families waiting to be seen.  After checking on our two patients, the waiting area was even fuller than before.  We brought in extra chairs and called the hotel to send the rest of the team as soon as possible, not to wait until 9am to arrive.

The first patient seen on rounds was Juan.  Juan is 22 years old and had his palate repaired for the first time in his life.  When this repair is done as an adult, it is a more complicated surgery.  His surgery was on August 2.  Dr. Ian Wilson and Dr. Rod Simonds examined him and told him he was good to go home.  They gave him after care instructions.  Photos: final examination, with Dr. Ian Wilson 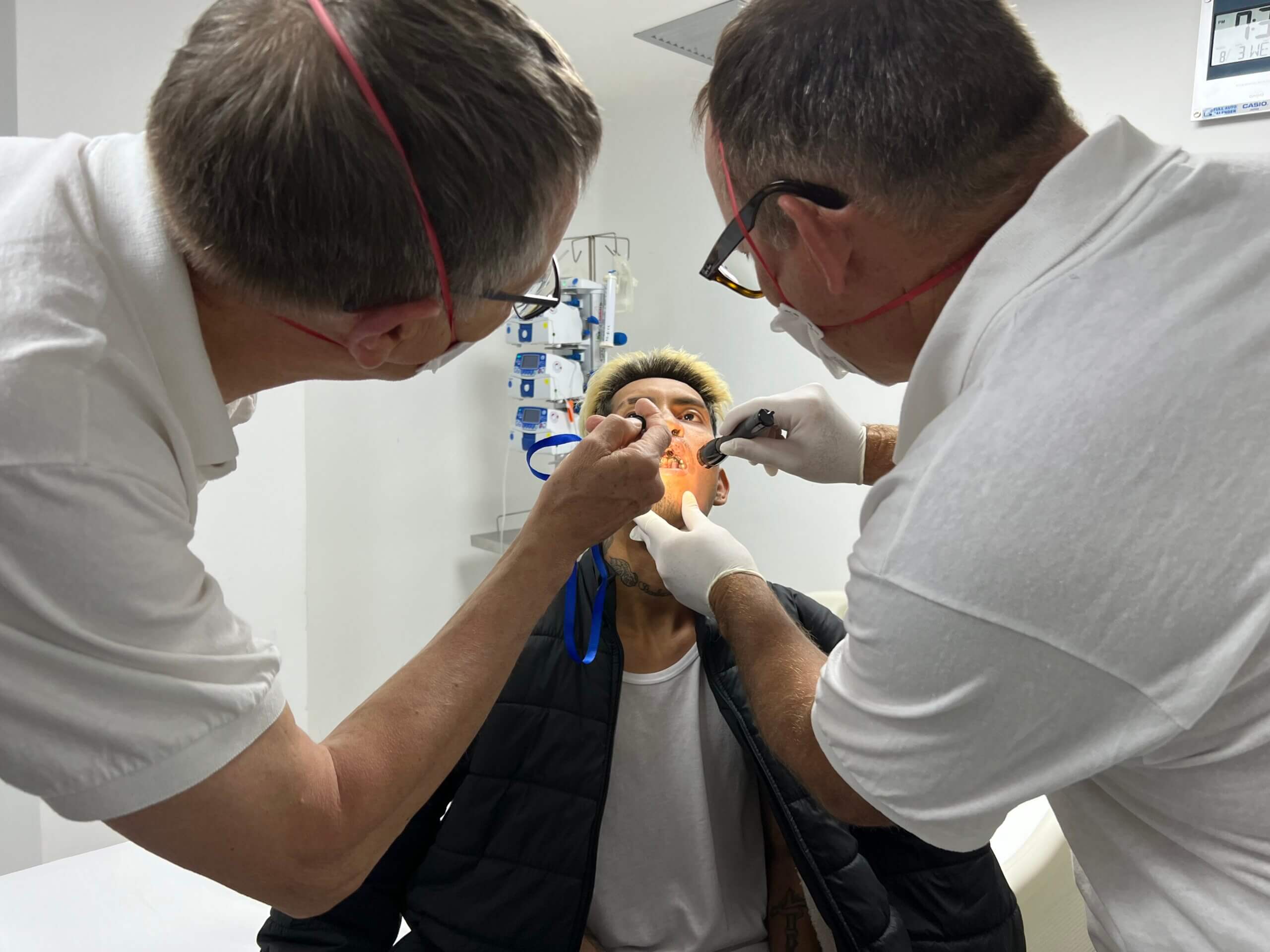 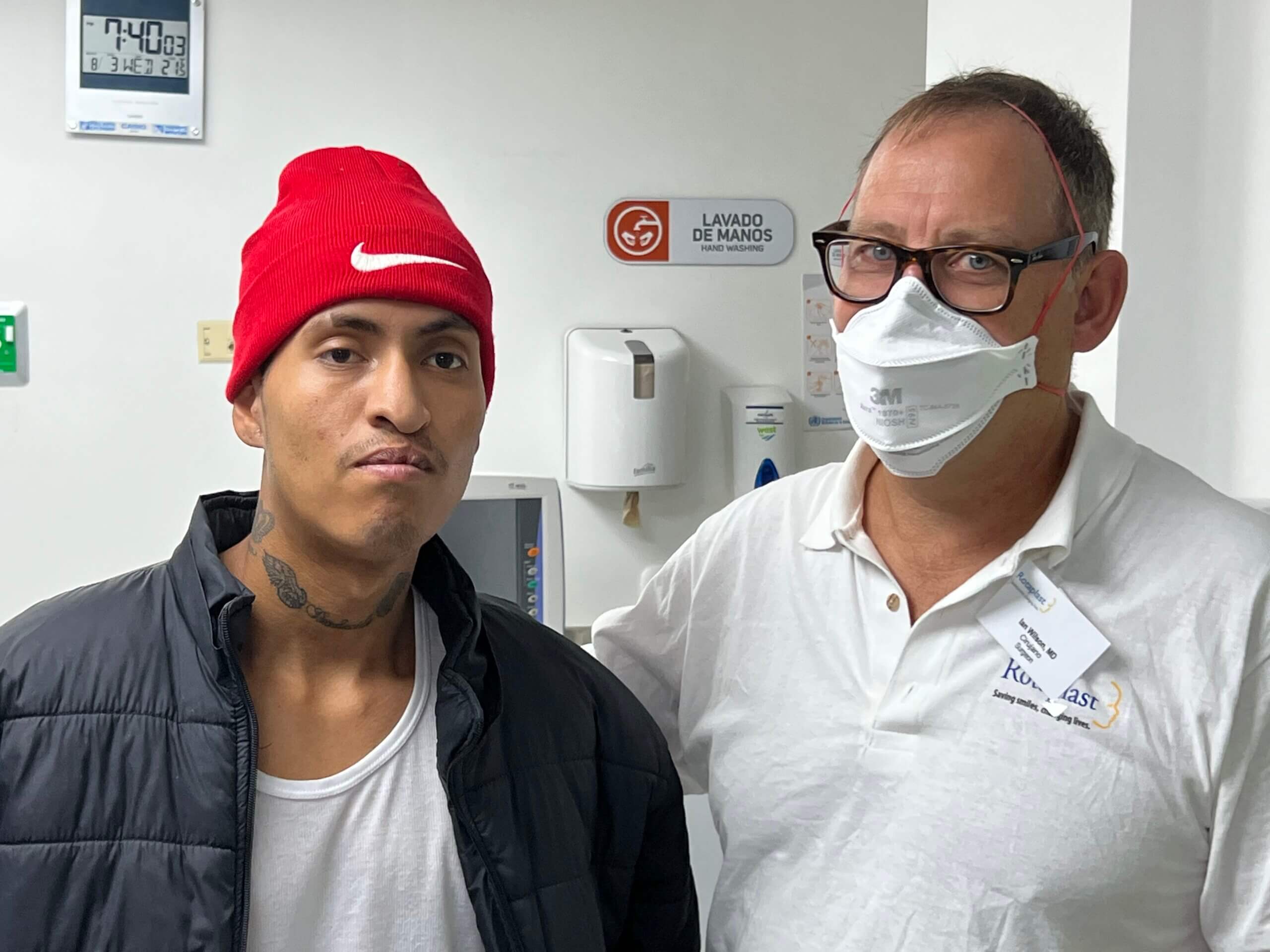 Next, we saw Brayan.  He is 23 years old.  He had his surgery on August 1.  You may remember from my blog on that day, he had a primary cleft palate repair as well.  Dr. Wilson and Dr. Simonds told his sister, who was with him at the hospital, that he could go home today.  They gave after care instructions.  Dr. Wilson also informed the sister that in a couple of months, after he was fully healed, he should be seen by a dentist.  During the surgery, they needed to remove one of Brayan’s teeth because it was rotten.  He said that a dentist may be able to save the rest of his teeth.  Brayan was very happy and ready to go home.  Photos: Dr. Ian Wilson and medical resident giving sister after care instructions; Dr. Ian Wilson, Brayan, Bonita, and Dr. Ann Mohler 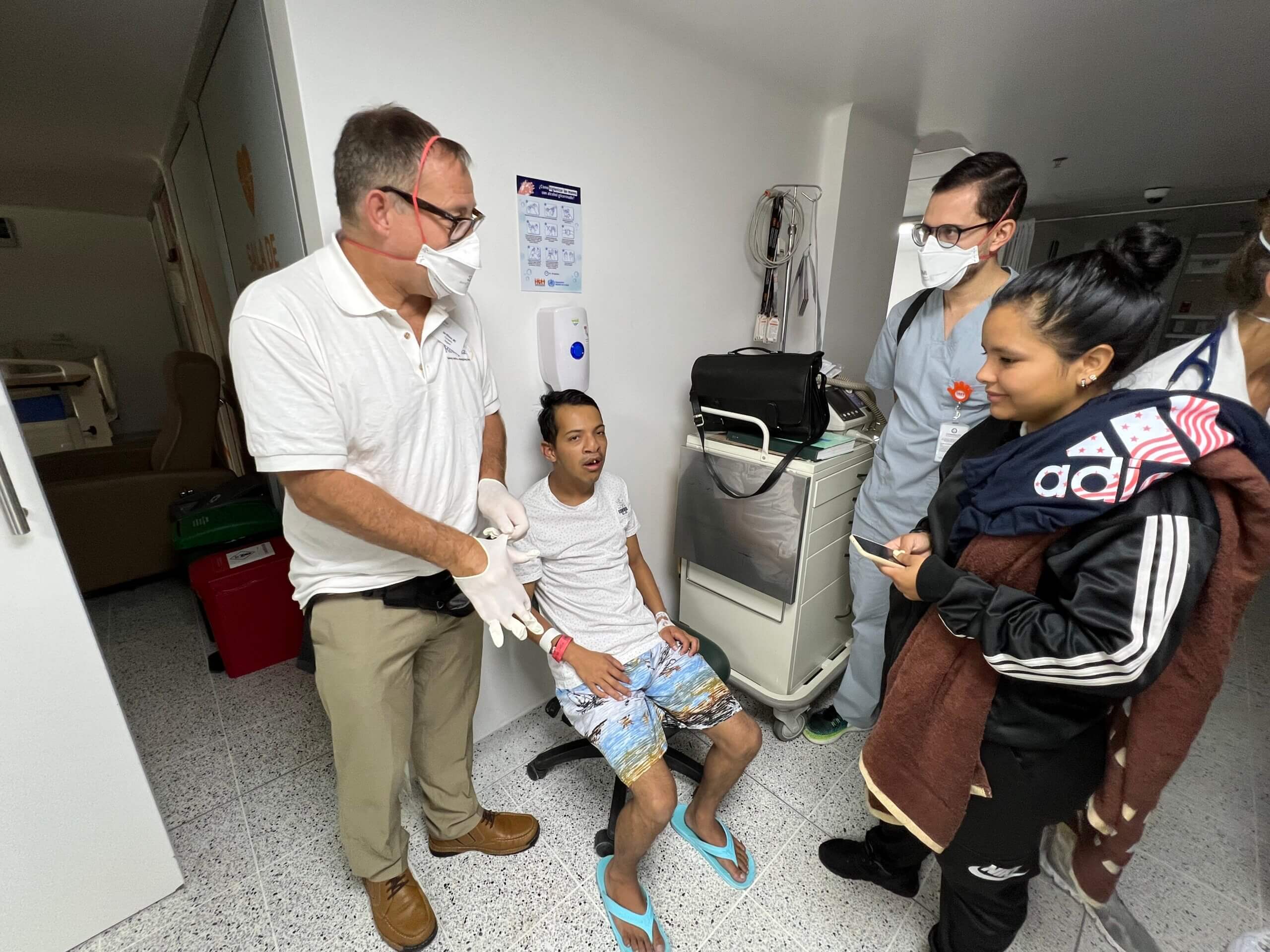 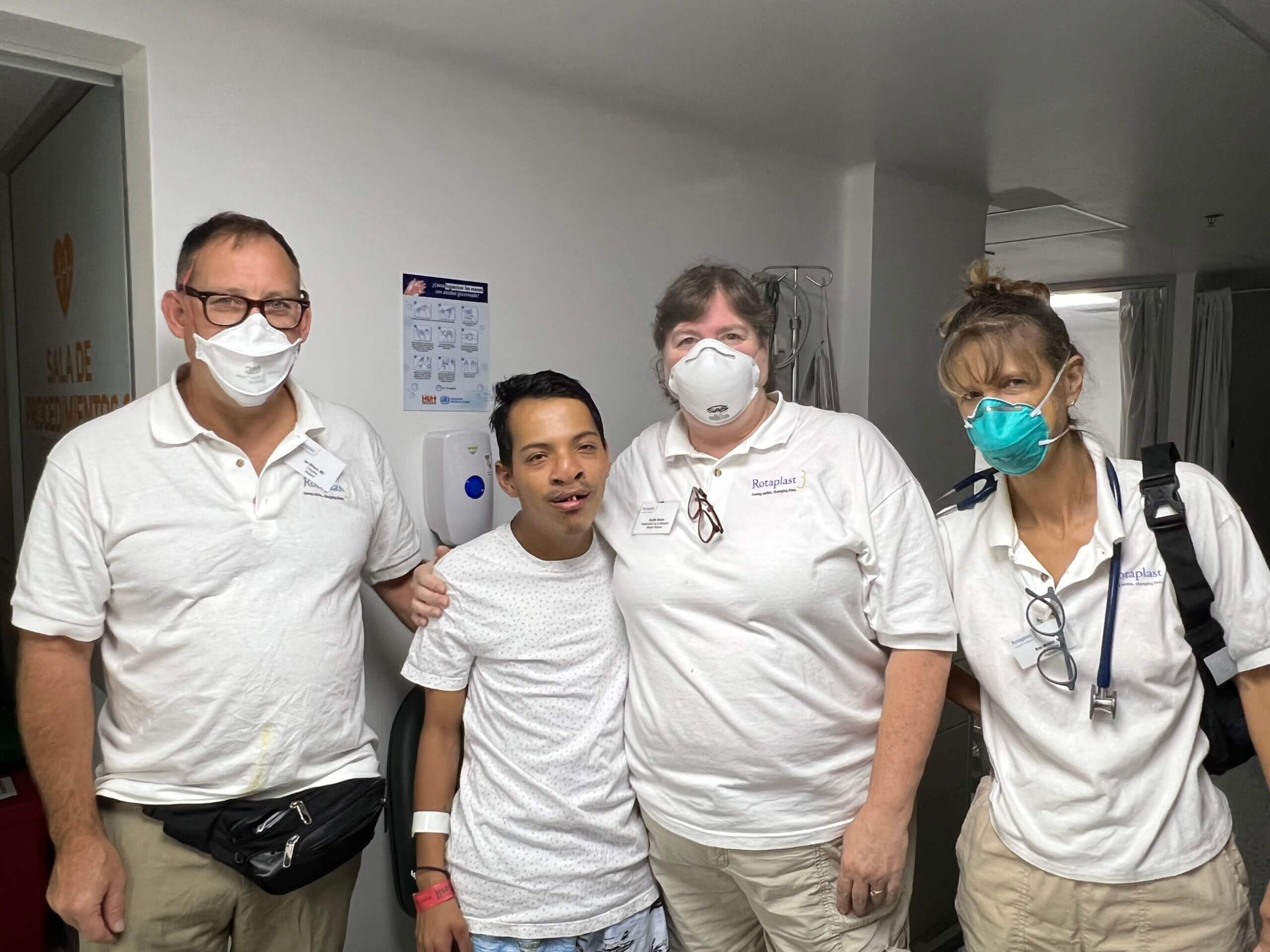 Here are some of the many pictures taken today at the clinic.  Some of them include their “before” or intake picture.

Naira had his surgery on Day 3 of our mission trip.

Carolina was one of the first patients of Dr. Wilson.  He was very pleased with the results of her surgery.  Notice how nice her lip-line is now! 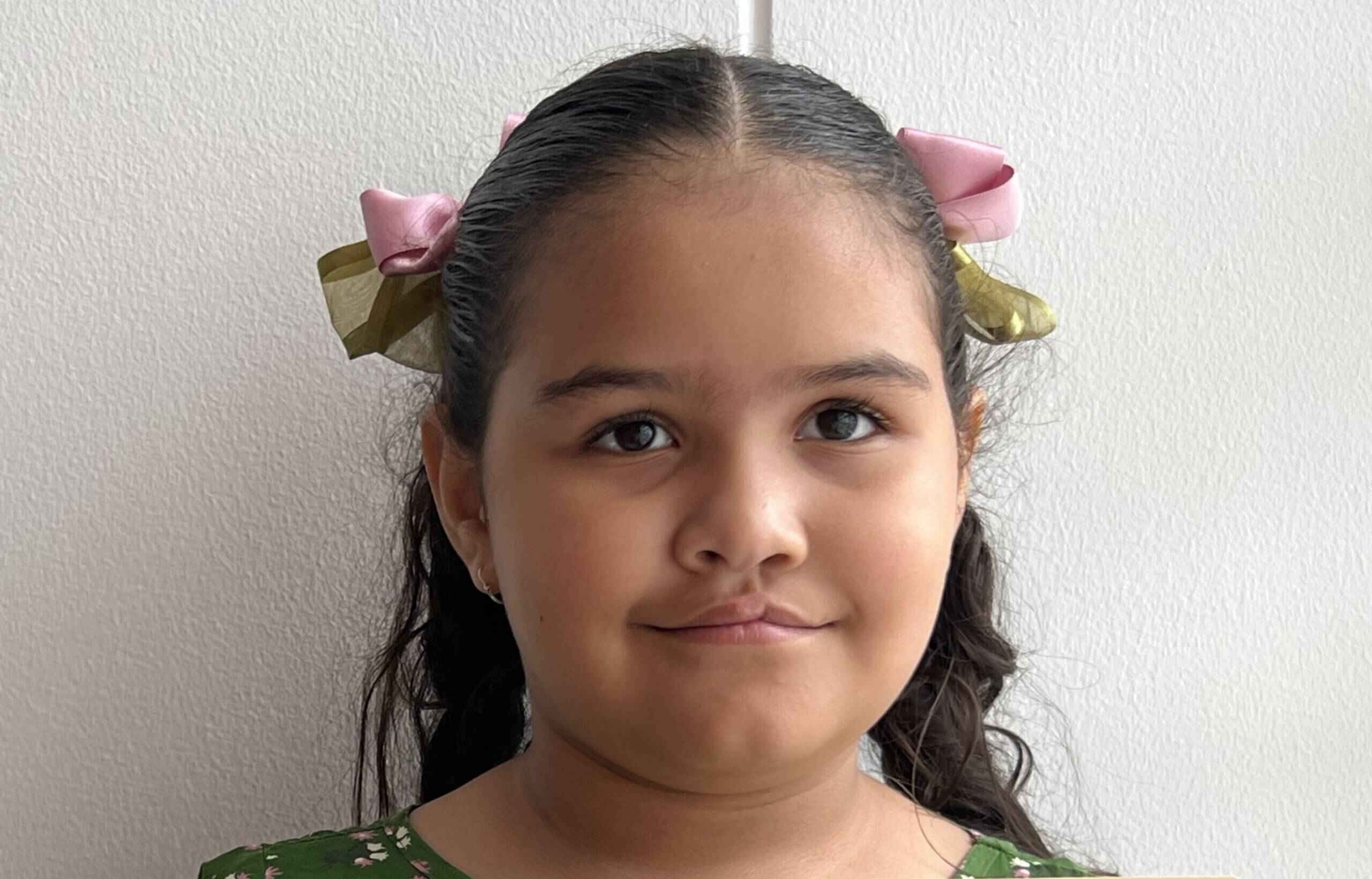 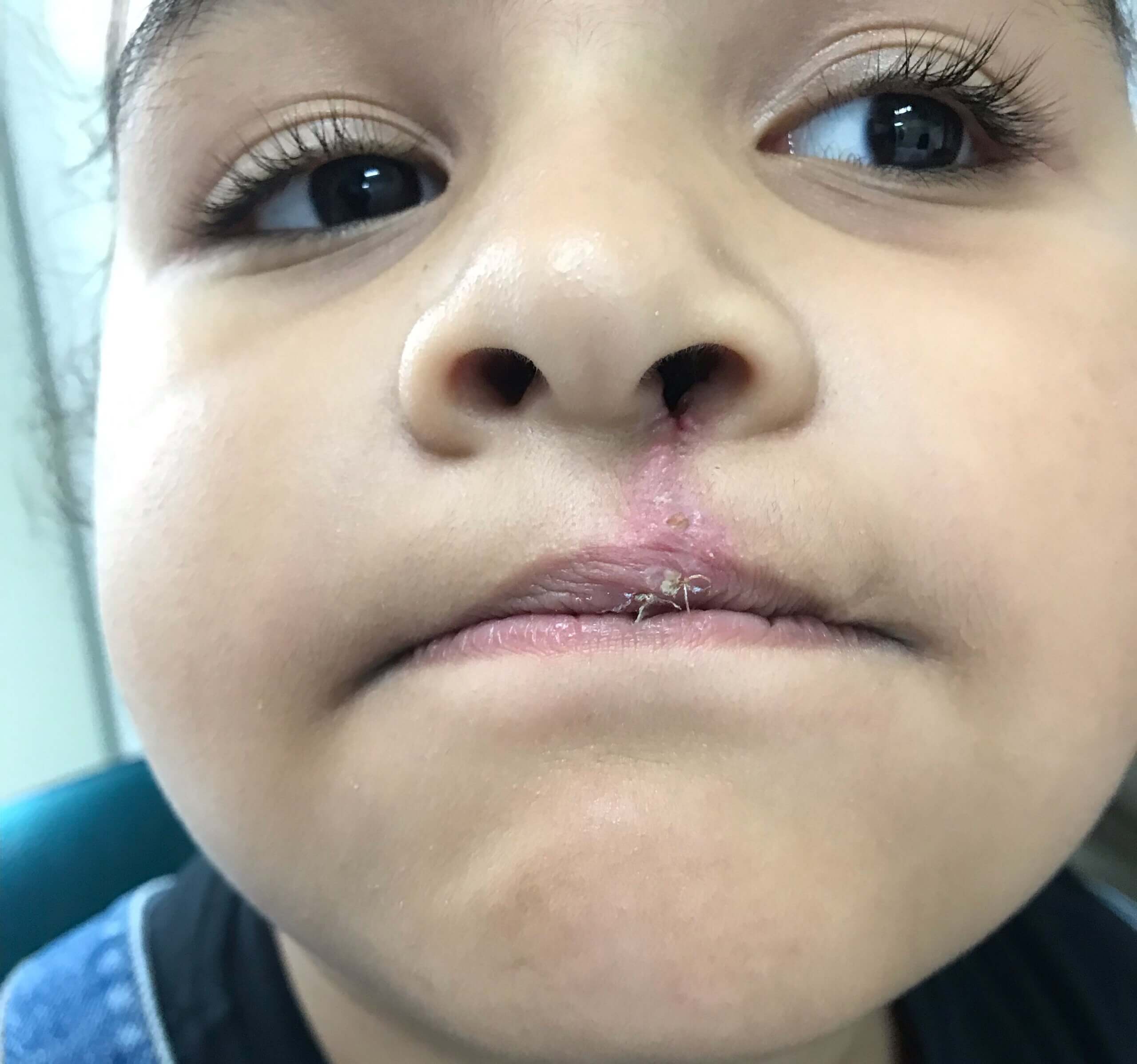 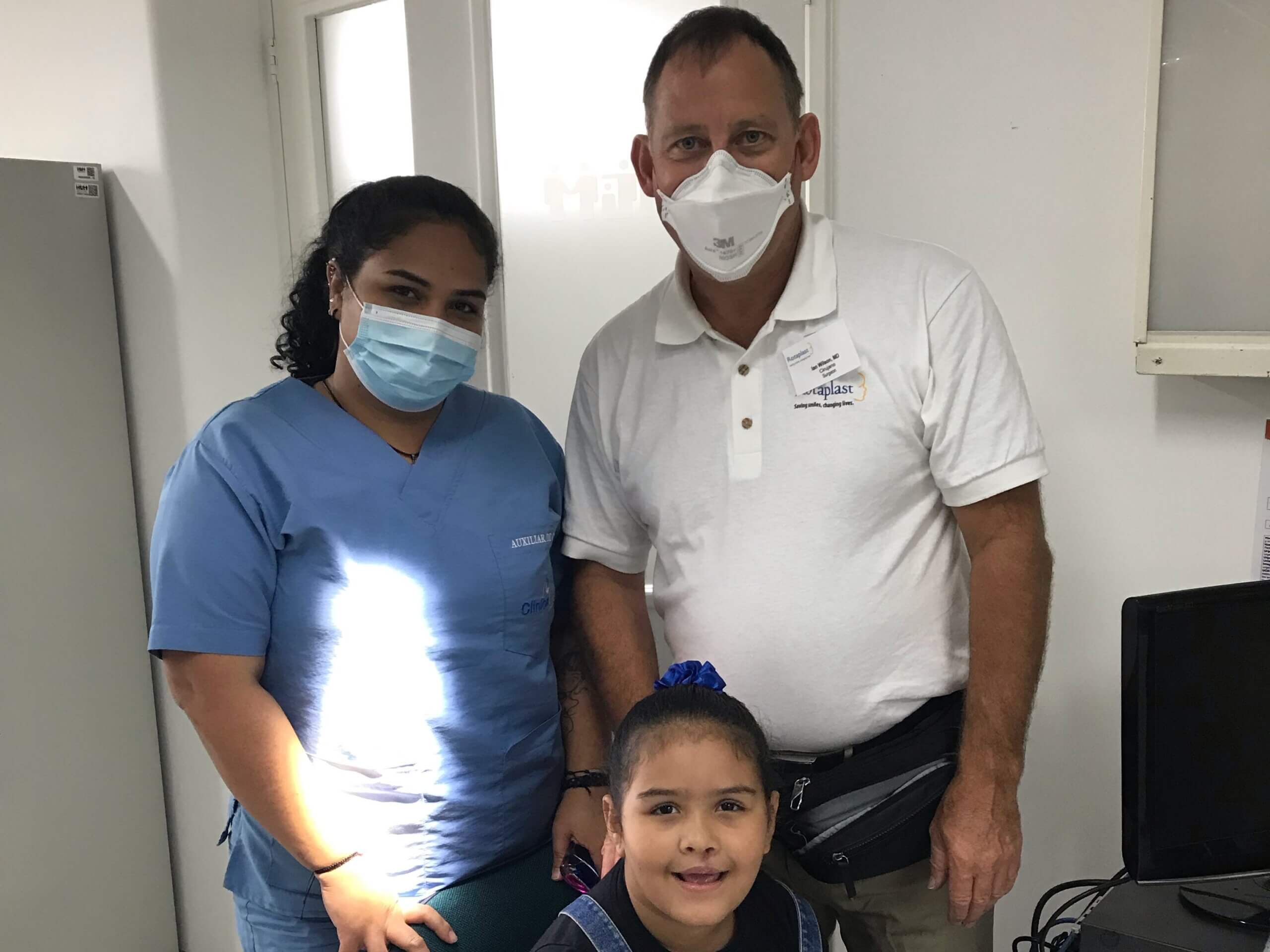 Andres was our first patient to go home after his surgery.  Look how perfect the lip line looks now and the area under his nose. 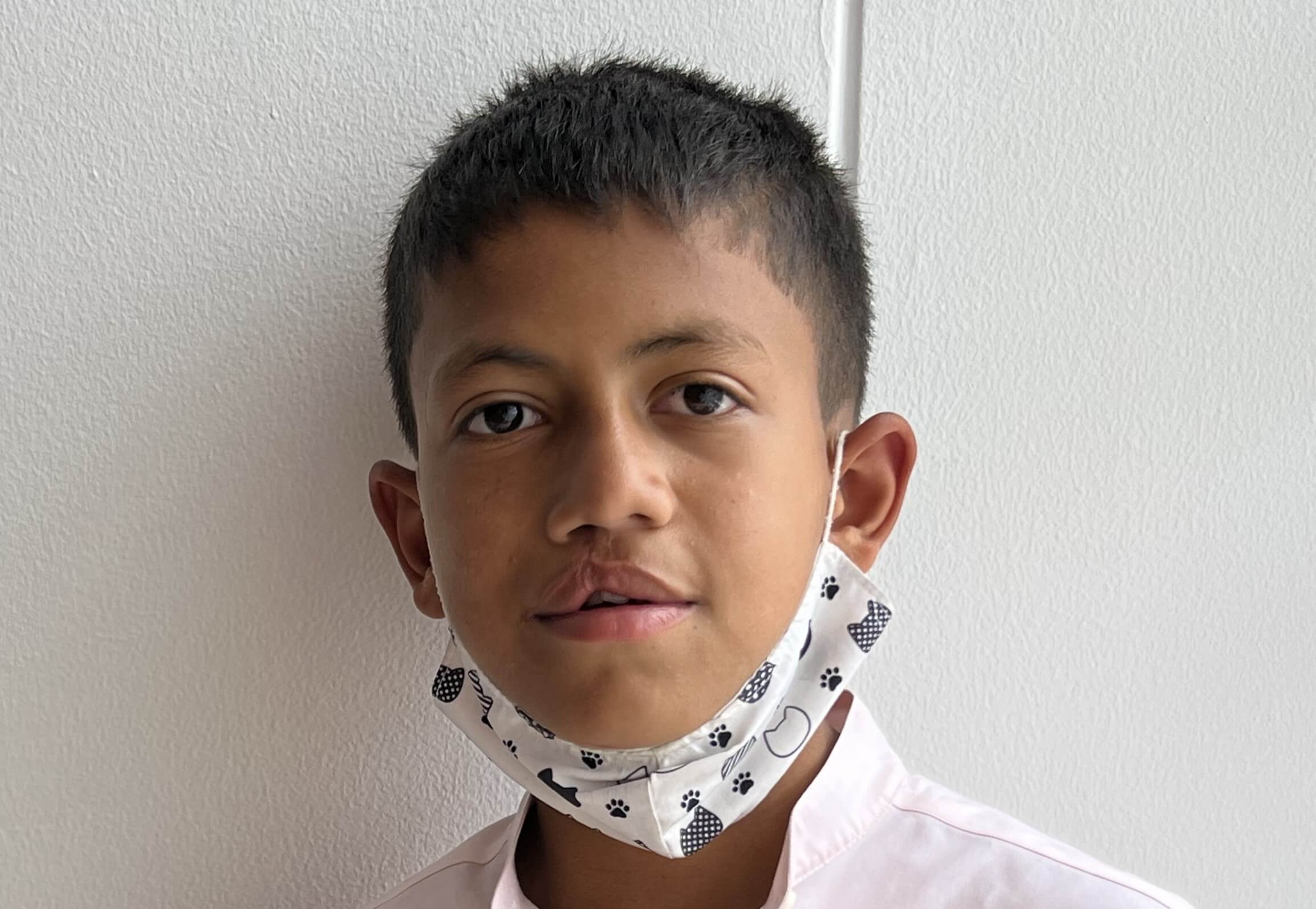 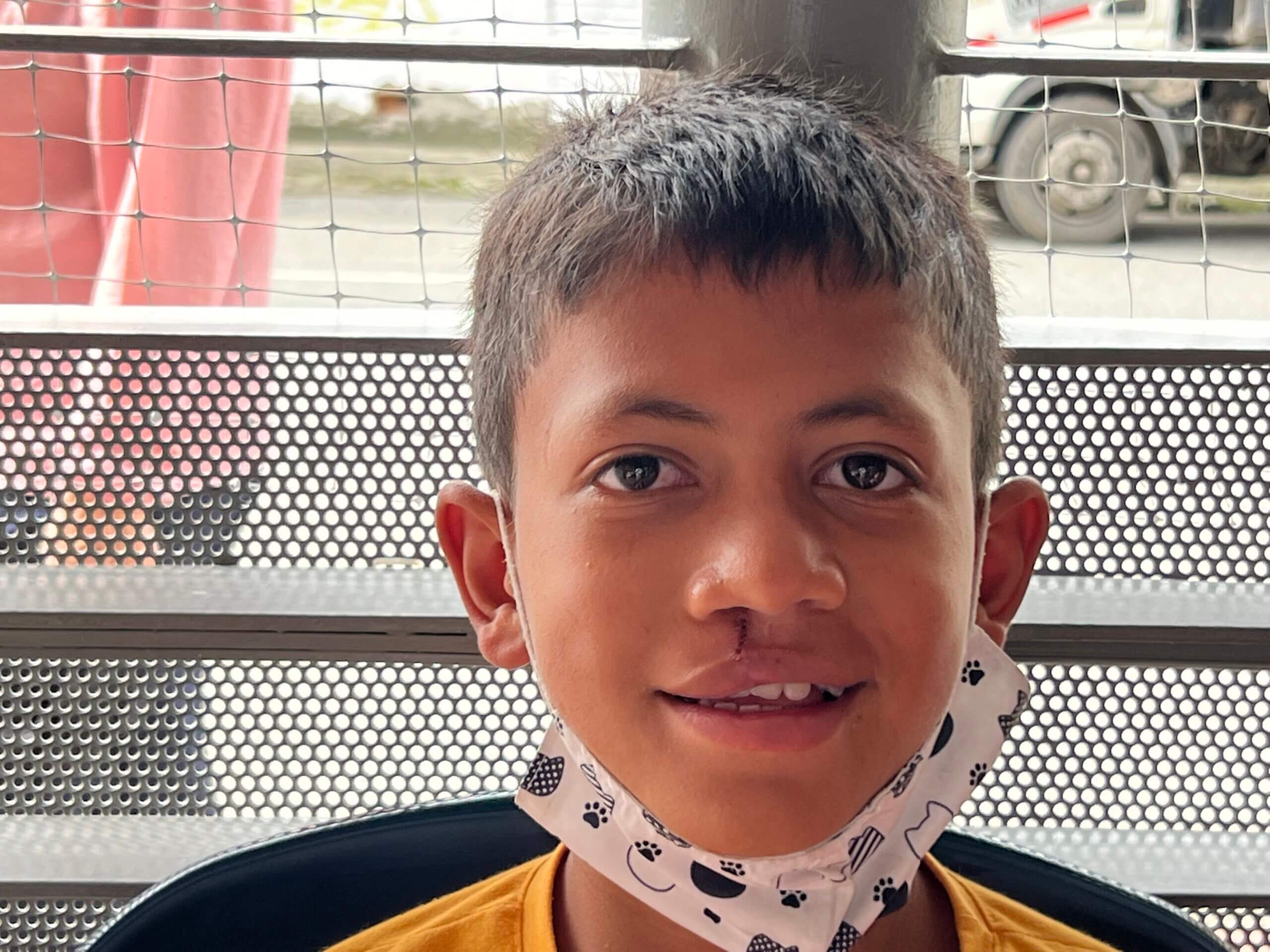 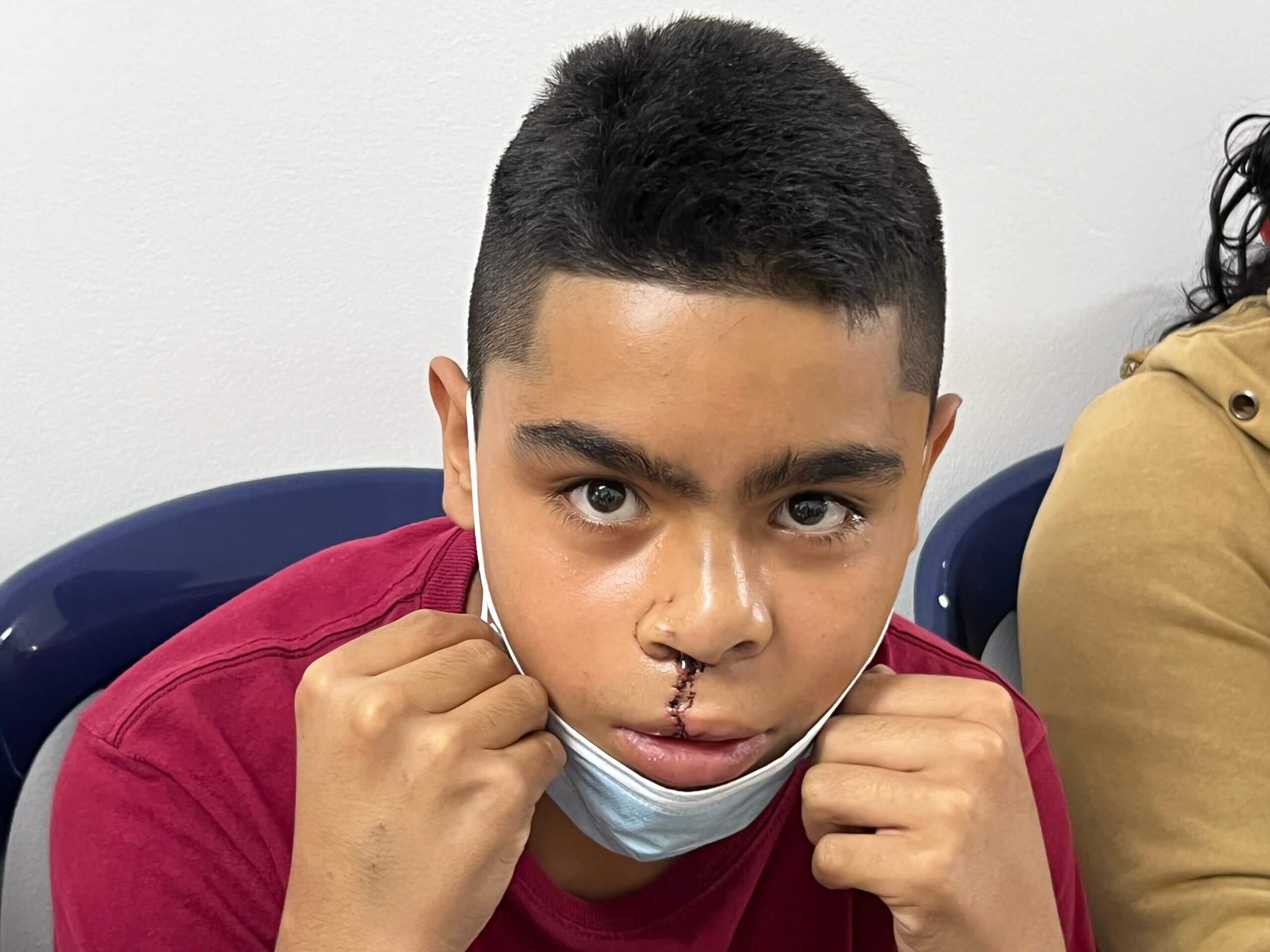 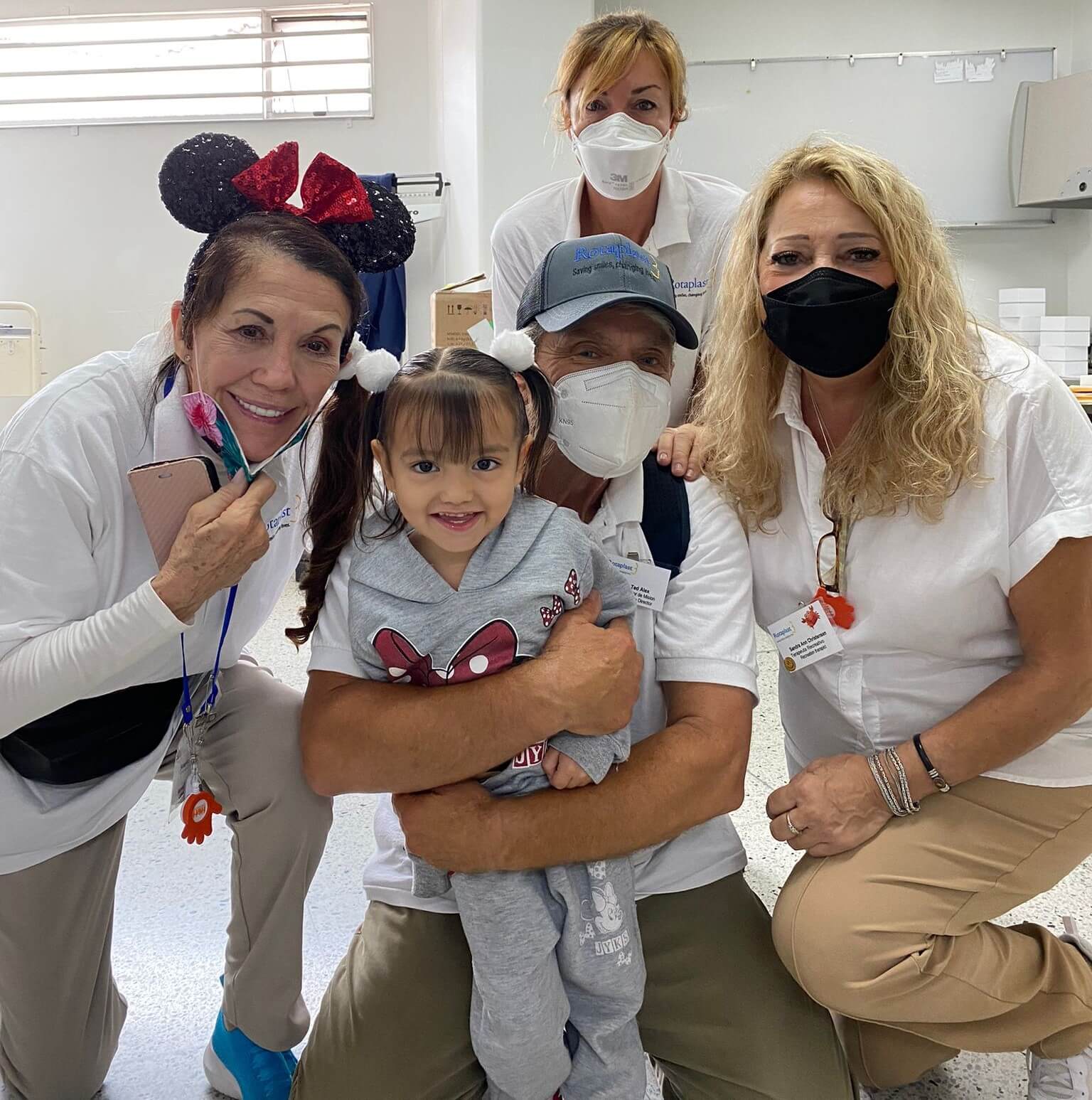 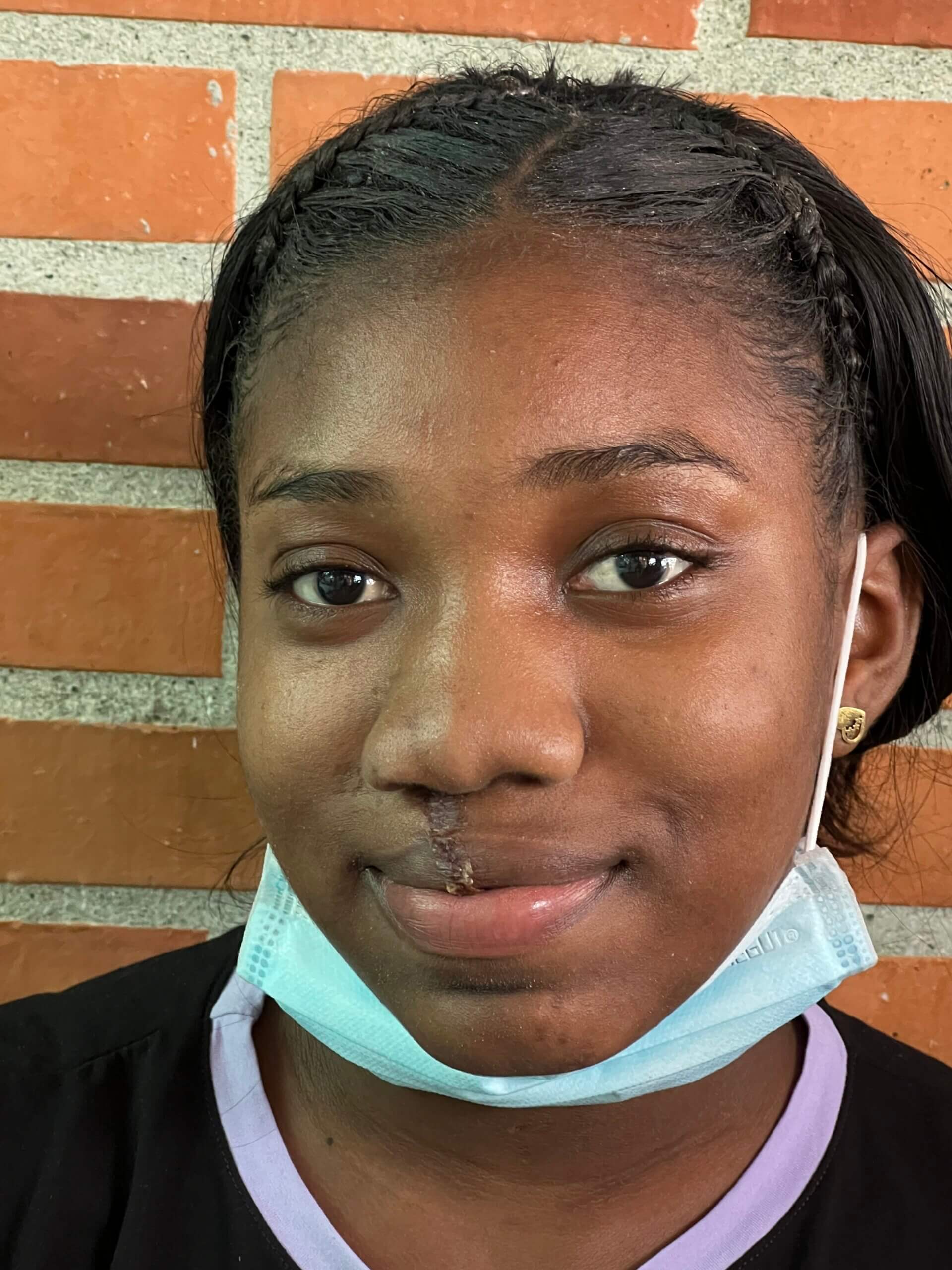 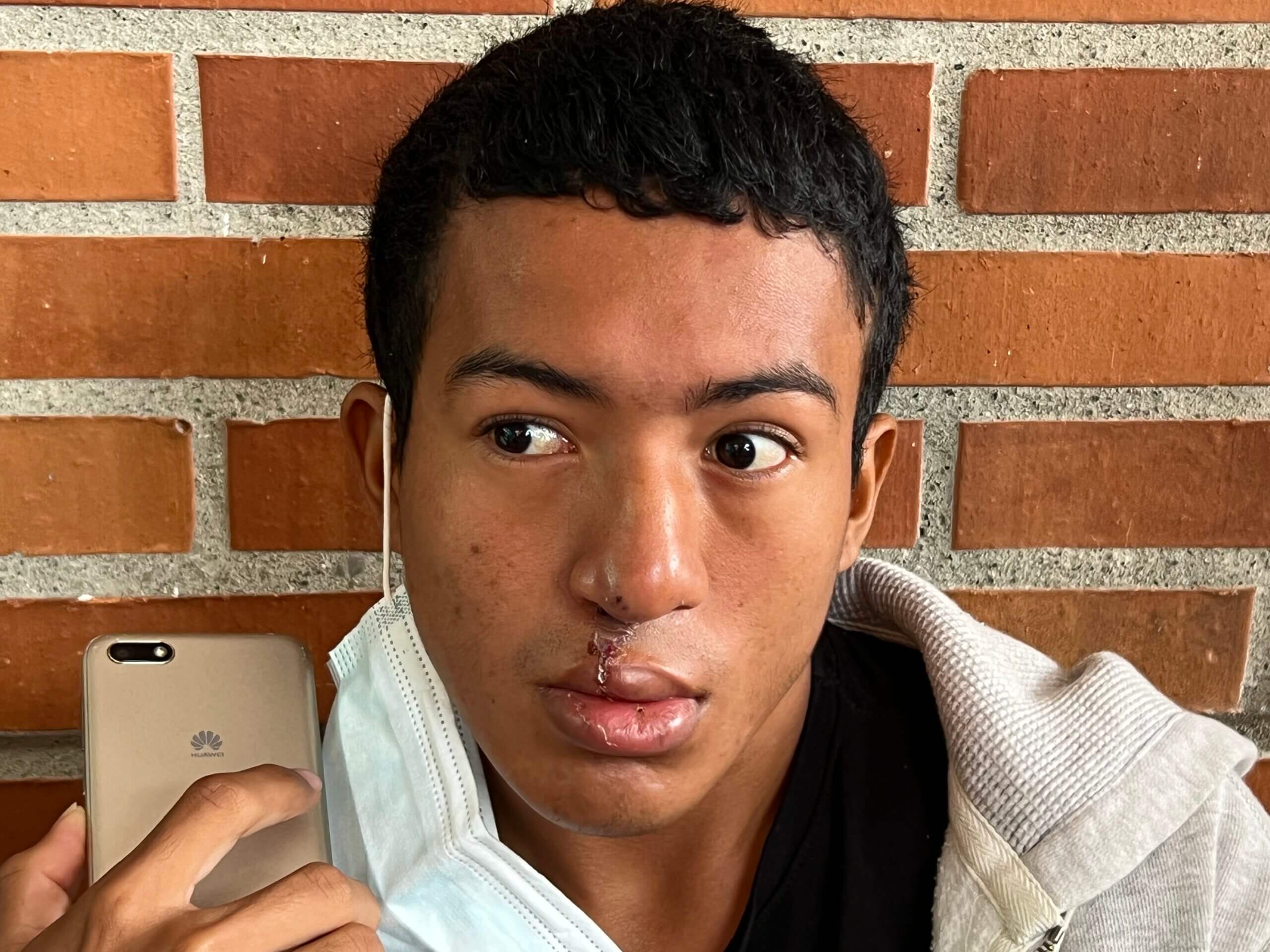 The picture below is of 3 of our 5 amazing surgeons. 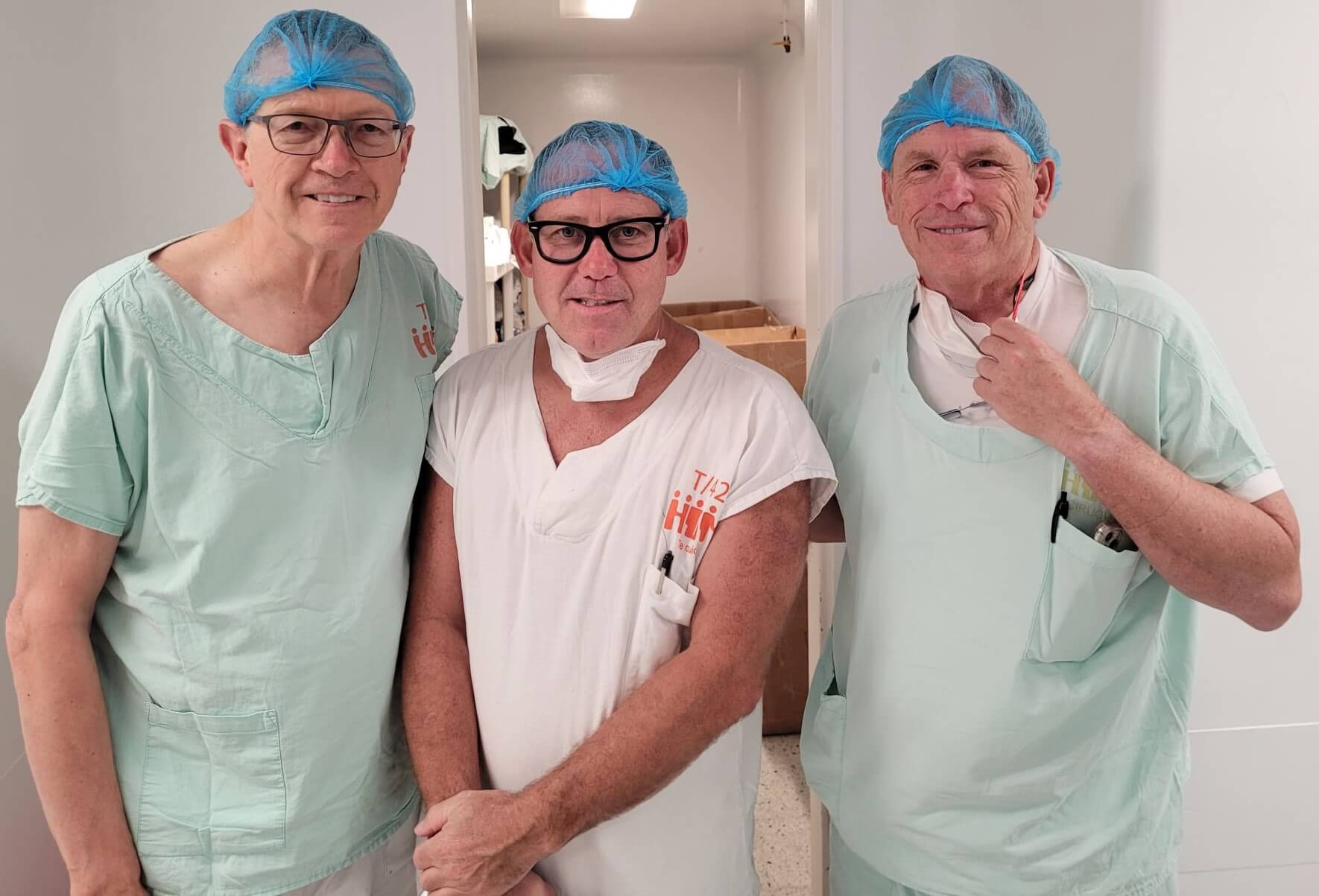 Dr. Rod Simonds is a plastic surgeon in San Francisco, California (on far left in picture).  He studied under Rotaplast Co-Founder, Dr. Angelo Capozzi.  He has been a plastic surgeon for 25 years.  At Dr. Capozzi’s encouragement, he went on his first Rotaplast mission and never stopped.  This mission is Dr. Simonds’s twenty-fifth.  He says that he goes on these missions because they are fun.  He is a very caring man who always takes the time to answer my many questions about the medical procedures performed on the patients.  In particular, he explained the tongue stitch and ABBE flap in ways I could understand and explain in this blog.  I really appreciate him.

Dr. Ian Wilson is in the center of the photograph.  He is a plastic surgeon living in Florida.  He is originally from Ireland and moved to the USA in 1994.  Dr. Wilson has done over 50 medical missions for Rotaplast and two other organizations combined.  He said about half of his career as a doctor has been spent on these missions.  He also did a 2-year fellowship studying the best practices for cleft lips.  Dr. Wilson really cares about his patients and giving them the best quality care.

When I asked Dr. Wilson about the number of patients coming in that have already had a cleft lip repair, he explained how most patients will require more than one surgery to correct a cleft lip since the nose and nasal passages are also involved.  Dr. Wilson said that the average surgeon doing cleft lip repairs in the US may see 6-8 of these surgeries a year.  Our surgeons perform twice, or more, of these on every mission.  Some of them go on multiple missions each year.  This makes them some of the most experienced surgeons doing these procedures.

Dr. Todd Farnworth (on far right in photograph) is from Phoenix, Arizona.  He has been working at the VA hospital since 1993.  When he was 18 years old, he lived in Brazil for 18 months on a church mission trip.  Dr. Farnworth speaks fluent Portuguese, which helps a little in Spanish-speaking countries.  He has gone on 10 medical missions, with Rotaplast and another organization.  The first 7 were to Brazil. He said that he continues to go on medical missions because he is making a huge difference in the lives of people.  Dr. Franworth has 6 children (5 girls and one boy) and 17 grandchildren, plus 2 more on the way.  Four of his children have gone on medical missions with him, one went on their own, and the sixth one wants to go on one.  It is clear that his family is as special as he is.

In speaking with everyone involved in Rotaplast missions, it is clear that the after-affects of these missions last forever.  Not only are the lives of our patients and their families changed for the better, so are the lives of every volunteer involved in each mission.