We celebrate July Fourth with a much needed day off. But first, rounds await. Chief Sib Schepel leads the team with fellow Dutch team member Dr. Rene Vreuls at a steady pace. Our other surgeons, Drs. Hootan Daneshmand, James Hoyt, Jann Johnson, and Kyle Song, all contribute with Egyptian pediatrican Dr. Mina Samir. Our patients are fine, and now we can proceed with our tour of the region of Sohag  arranged by the hardworking Dr. Sherif Bakri. Our itinerary includes red white and blue. 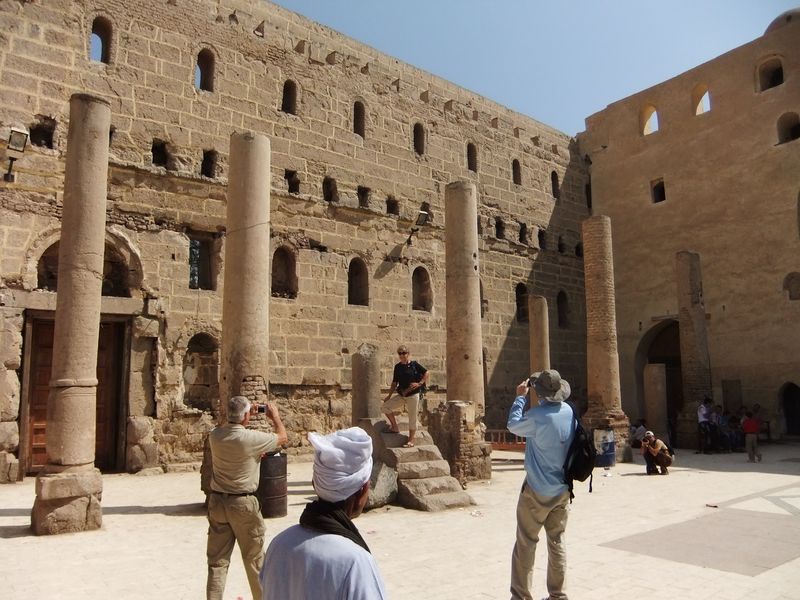 Incense overwhelms our senses with visual clouds and full fragrance. Hundreds of parishioners crowd the church for the Sunday liturgy with several rows yielding their place to us. Chanting from multiple voices is familiar to Orthodox faithful although in Arabic. After having observed several mosques near our hotel and the university, we are now touring Coptic Orthodox Monasteries.

The lineage of Christianity in Egypt from this modern Coptic church is soon reflected in the twin Red and White Monasteries. Our guides inform that St. Mark arrived in Egypt around 60 A.D. Incredibly, these monasteries date from the Fifth Century A.D. Each contains massive outer walls of substantial rock masonry surrounding the courtyard and central areas. The inner churches each contain orthodox architecture with a cross shape and domes several stories high. One is built from white limestone rock while the second contains stone with a red hue.

Each of the monasteries contains intricate stone carvings from fallen hands. An Italian restoration team is working on recovering ikons covered by centuries of wear and tear and fumes. Deep in the White Monastery we are ushered into a small chapel. The stairway first goes down and then up and is lined with ikons. The wall contains large stone blocks,  and, upon close inspection, often contain hieroglyphic inscriptions. After fifteen centuries, earthquakes, floods, deserts, and untold lives, the monasteries are still carrying on the words and traditions including an outdoor festival soon to commence at the White Monastery.

Our bus now heads across verdant fields near irrigation canals from the life giving Nile River. Known as the Blue Nile near its origins in Ethiopia and Kenya, we celebrate having completed the red white and blue trilogy on the Fourth of July.  Here the Nile is variously deep royal blue, sometimes green in color. More than one of us have visited Can Tho, in Vietnam, compare the power and breadth to the Mekong River. Many farms with multiple crops from corn, cotton, date palms pass by, with homes  ranging from thatched roofed dwellings to incredibile multistory mansions. Competing transportation includes donkeys, motorbikes, trucks, tok-tok (motorcycle with covered sidecar taxi), bicycles and one camel.

Soon we arrive at the adjacent and ancient city of Akhmim. A four story excavation below ground contains a thirty six foot high statute of Merit Amon, daughter of Ramses II. The site is still active dating only from 1981 when constructions workers discovered the statute while digging a foundation for a new building. Now the supervising Egyptian archaeologist explains their work pointing to temple floors, Roman and Greek statutes from centuries later and a smaller statute of Ramses II. But it is Merit Amon which claims our attention with her incredible and striking figure towering over the excavation. We end the tour visiting an Egyptian cotton weaving factory but still discussing the recent discovery of the fabulous Merit Amon.

Rotaplast volunteers completely fell in love with Youssef.  An adorable and easy-going six month old little boy, Youssef was born with both a cleft lip and palate.  From the local village... Read More »

Rotaplast strives to ensure every child who needs cleft lip and/or palate surgery receives it. Sometimes, though, due to a patients blood count or medical history, they may not be an immediate candidate fo... Read More »

In Egypt, the importance of a beautiful image is not a superficial one; particularly for girls.   In many of the local villages, marriages are agreed upon during adolescence.&... Read More »