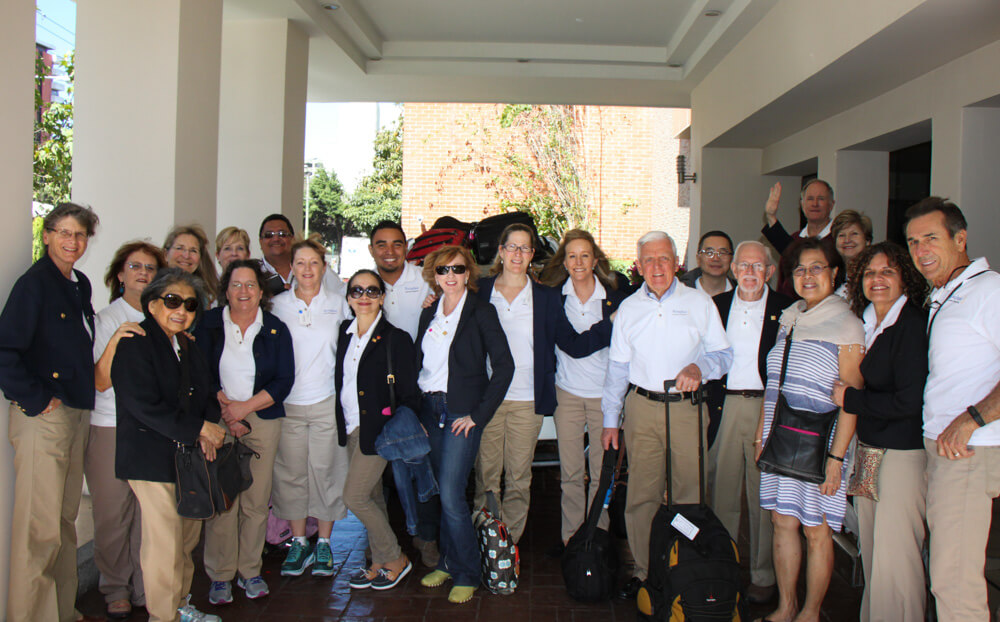 As is customary on the last day of the mission, today the doctors conducted the final post-operation examinations. All of the patients that returned to be evaluated were doing remarkably well. It was particularly heartwarming to see that some of the bone graft patients were able to slowly walk into the clinic with a smile on their faces. 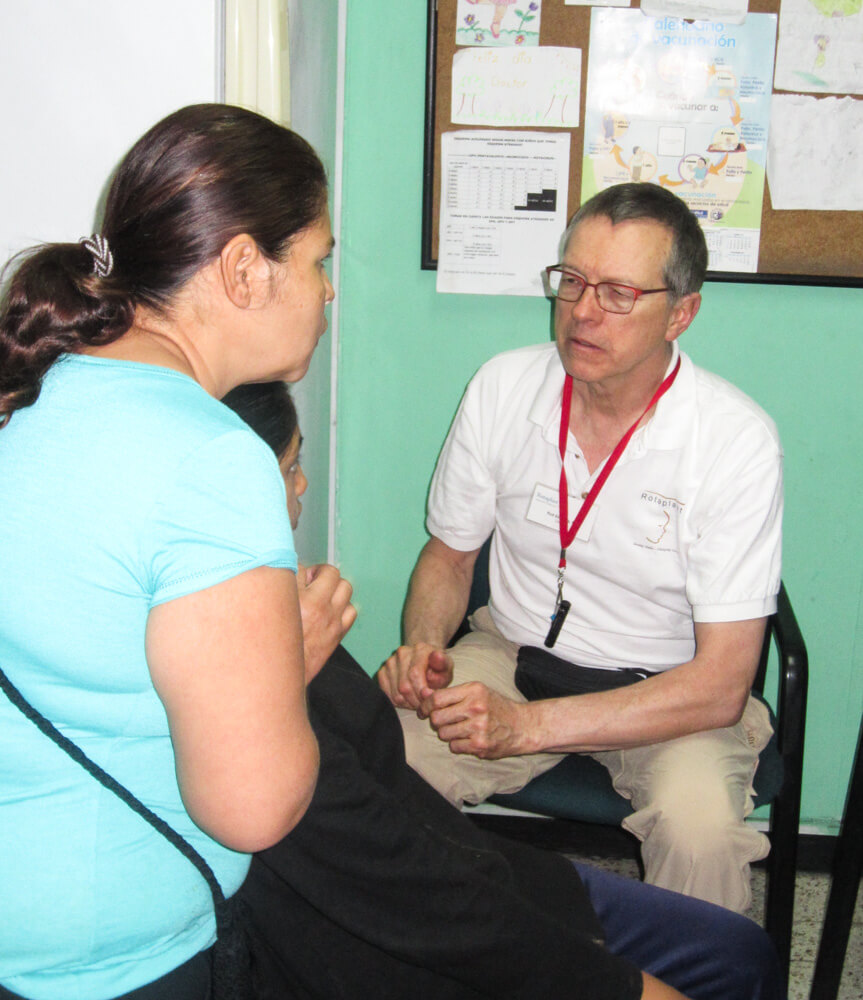 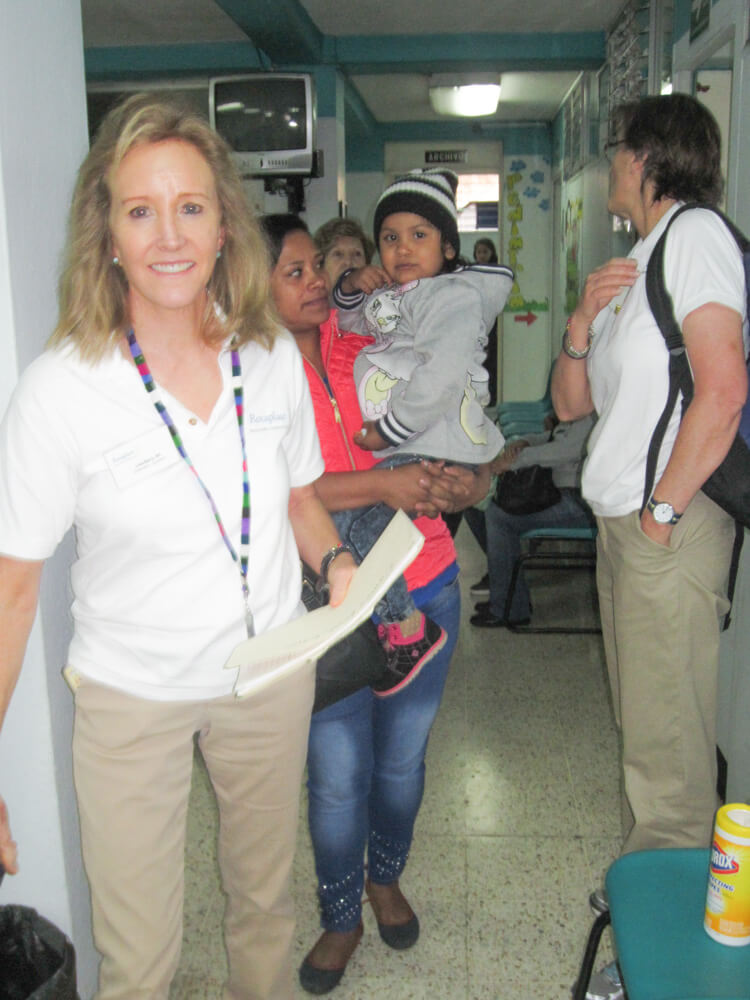 Nurse Lisa Barry ushers a patient into the examination room. 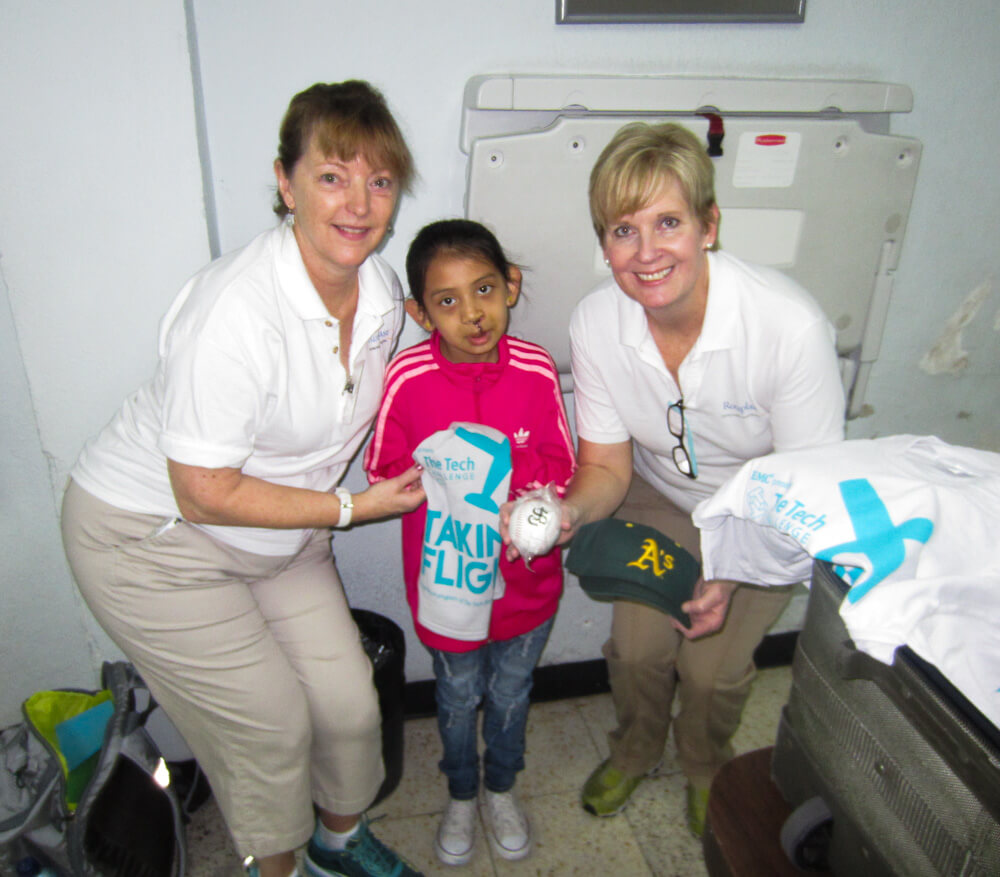 Laurie Steckel and Cyndie George distribute gifts to the patients.

In the evening we celebrated the successful conclusion of the mission at a dinner hosted by the Rotary Club Guatemala de la Asunción. 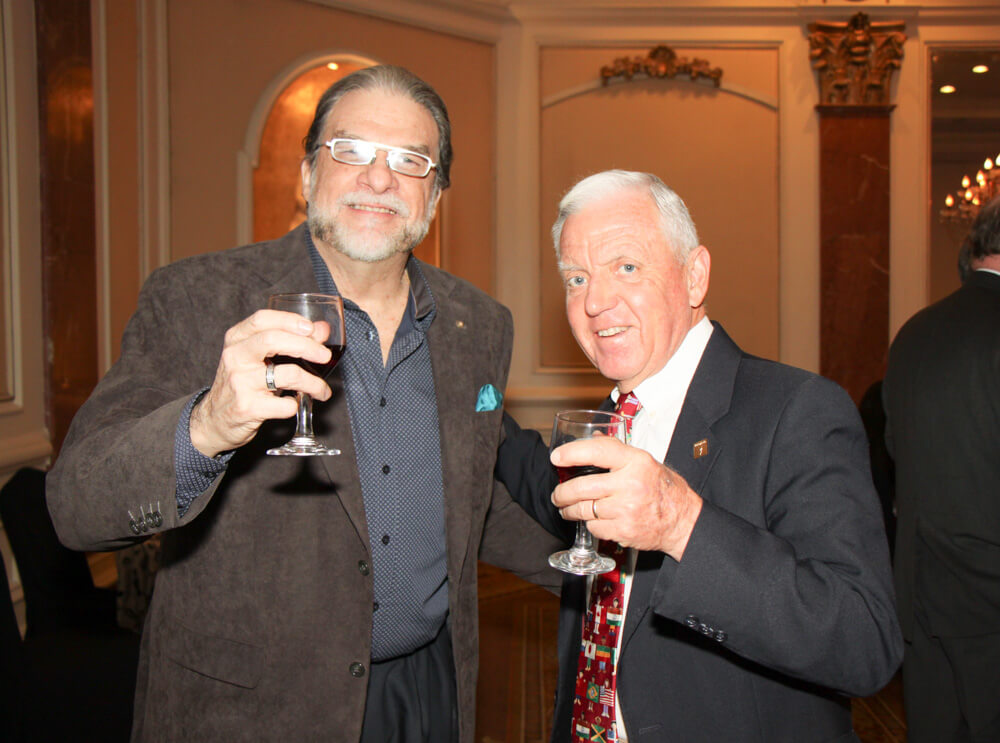 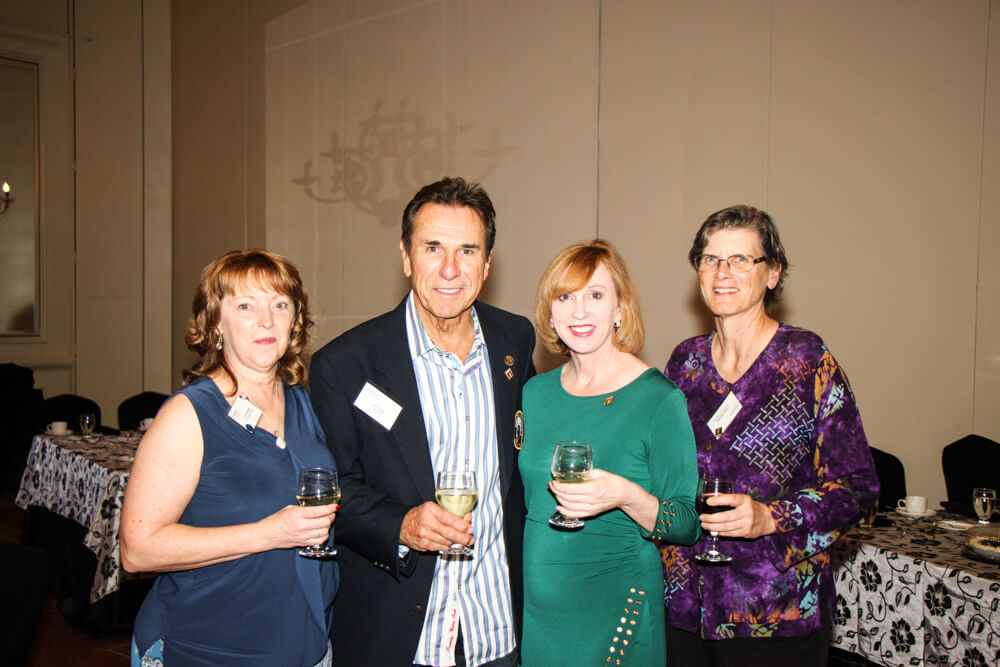 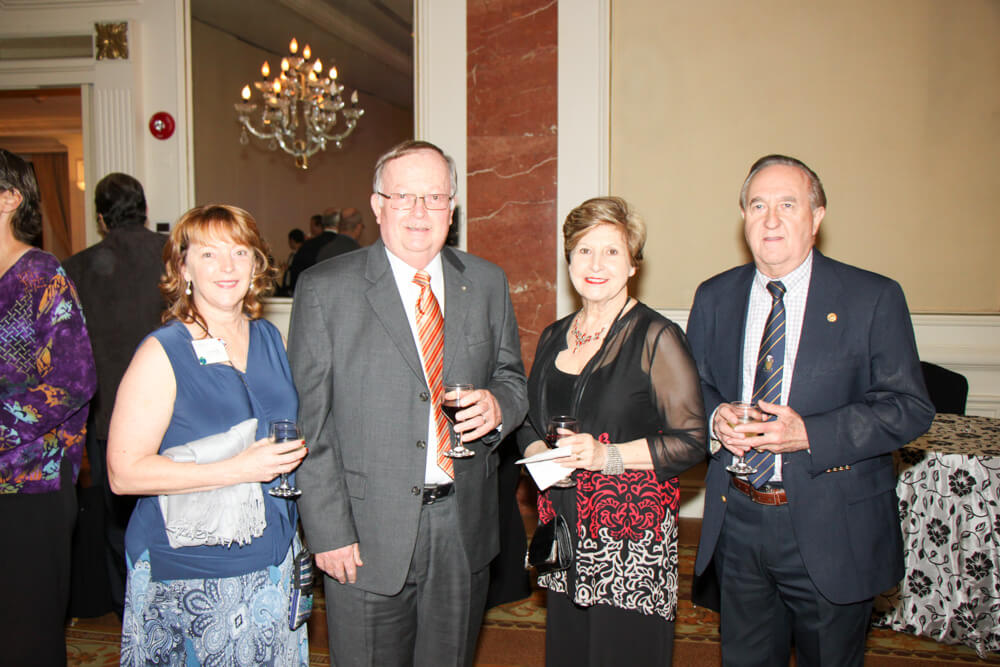 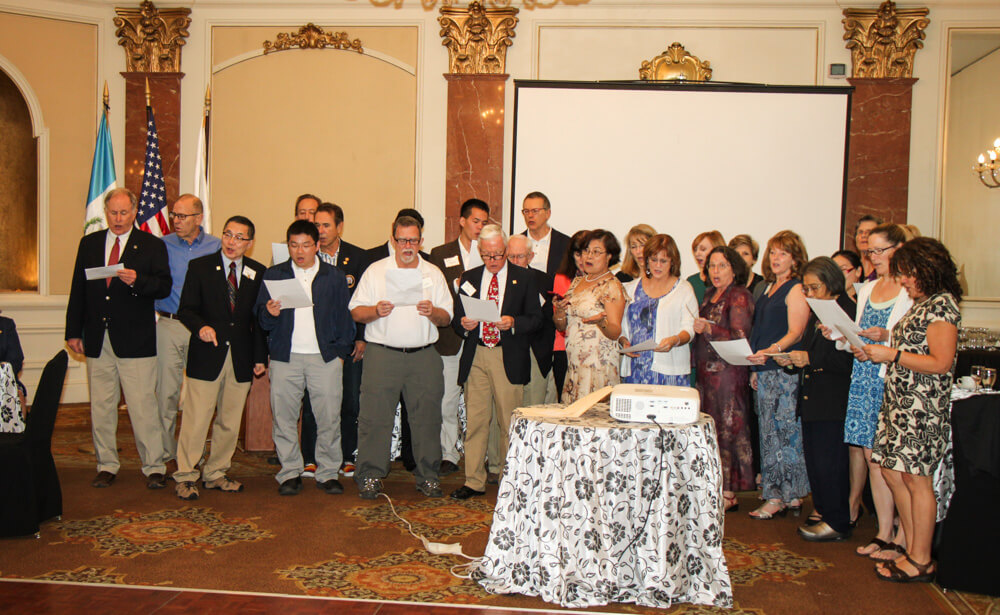 The team serenades our hosts with an adaption of “Teach Your Children Well” (Crosby, Stills and Nash) written by Medical Director David Low. The song’s final stanza, quoted below, eloquently reflects our feelings as we say “Adiós” to our Guatemalan friends.

Treat the children well, their smiles will tell, and they’ll have bright eyes.

And we will laugh with them, but then we’ll cry, when we say goodbyes.

Muchas gracias, our friends. Wish that this would never end,

Hope to come back again. You know we love you.

As we gather together for a final group photo before departing for the airport, we are proud of what we have accomplished.

Despite the difficulties in getting our equipment in and out of customs and having a number of the team taken down by illness, it was a smooth and very successful mission. During the Pre-Clinic day a total of 155 patients were evaluated and 34 “walk-ins” were evaluated on later days. A total of 81 patients had surgery. As some of them had more than one procedure, the medical team performed a combined total of 103 medical procedures and 17 dental procedures.

None of this would have been possible without the combined efforts of many generous individuals and organizations, both in the United States and Guatemala. We are grateful to the Rotary Club of Guatemala, Guillermo Figueroa, Dr. Milton Solís, Belia Contreras, the Rotaract and Telus volunteers, and the administration and staff of the APROFAM hospital for welcoming us with open arms and providing invaluable support.

We also wish to express our heartfelt gratitude to the Rotary Club of San José and their generous donors for fully funding our mission.

In closing, it has been a pleasure and an honor to be part of a great team of exceptionally talented medical professionals and dedicated non-medical volunteers.

After a long night of redeye flights we finally made it to Guatemala City! Surgeons, Pediatricians, nurses, and other volunteers have come from the Boston, Rhode Island, Hawaii, Oregon, California, Washing... Read More »

Today patients began arriving at the hospital, some as early as 3am. The inner courtyard of the hospital quickly filled with patients and family members as they patiently waited to be screened by our pedia... Read More »

Day one of surgery has started off with a bang! Our team began work at 6:30 am this morning, and as I write this at 6:00 pm the last surgery has just begun. Everyone has been upbeat and energized throughou... Read More »