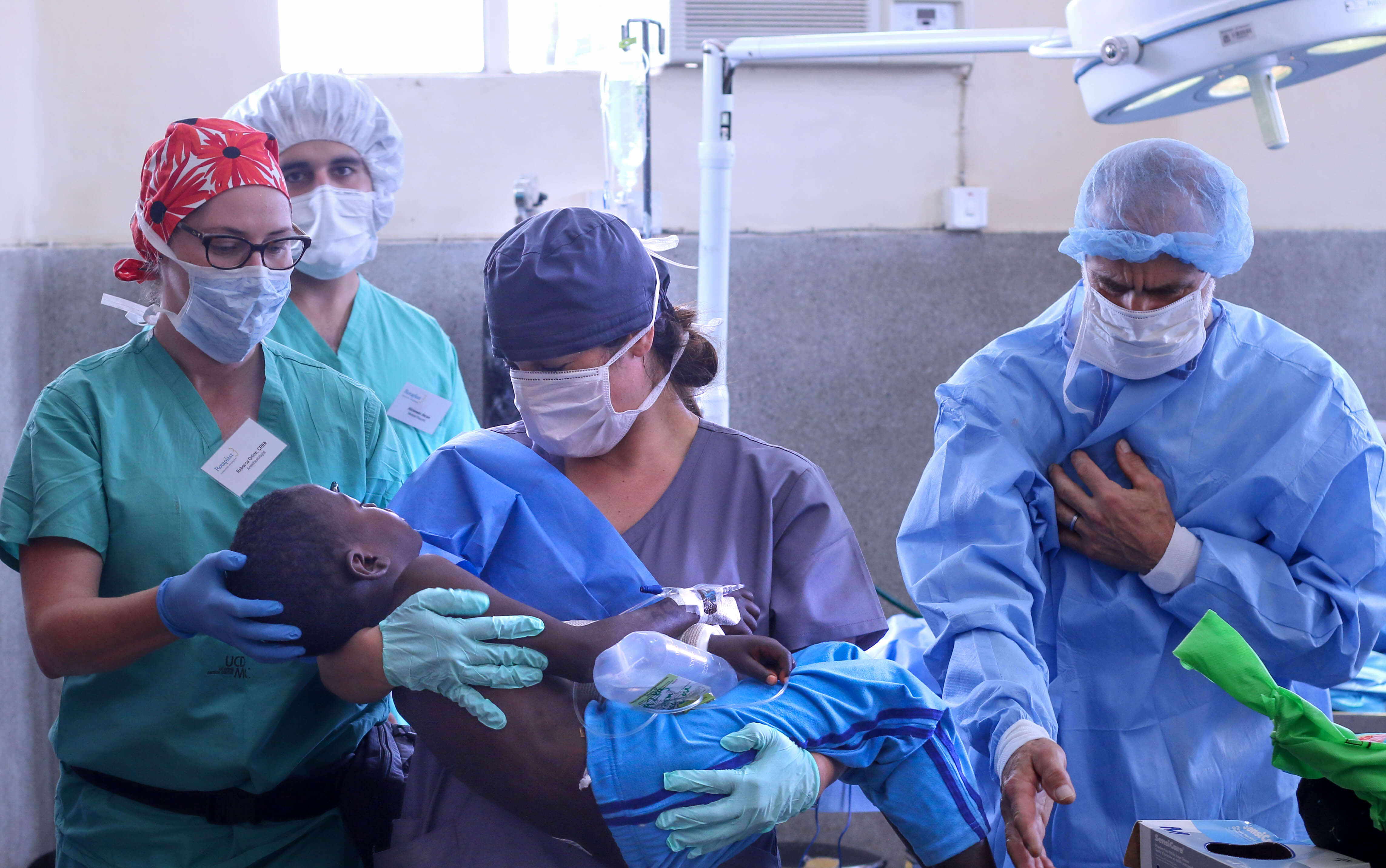 At opening clinic, most children clung to their mothers and were visibly tense.  Not John.  He ran through the legs of doctors and nurses, pulling on our pockets in search of chocolate or a good tickle.  At the time it wasn’t clear who he belonged to and if he was even a potential patient.  To me, there was no visible sign of abnormality- other than the most beautiful, biggest eyes and widest grin I’d ever seen.  I came to find out he had a bad burn on his left arm that kept it locked in about 90 degrees with something that looked akin to a wing or web between his upper and lower arm that kept it stuck in place.  He is six years old.  His arm has been this way since he was one and half.

Three days later, I visited him in the Ward the morning of his surgery.  I had a very special elephant that I brought for the perfect child, I knew it would strike me when I met them.  That morning, it was clear with every fiber of my being that it belonged to John. 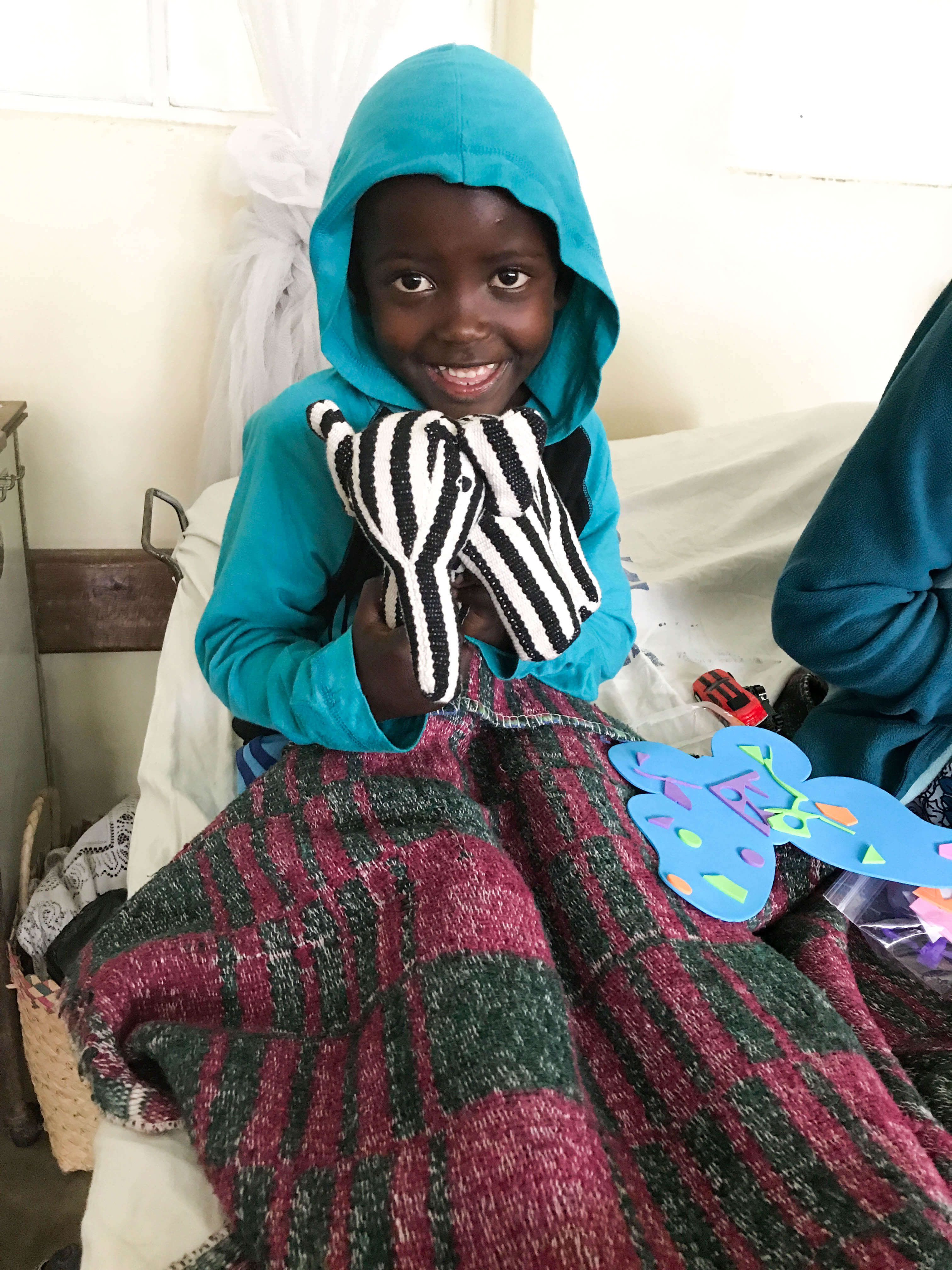 A few hours later, we met in the pre-op waiting room.  He looked as nervous as I had seen him yet, but it was nothing that a few fake licks and barks couldn’t fix from a stuffed animal dog. [Pictured: John Kaufmann (Patient Transporter), John J.’s mom, and John J. waiting for his operation]. 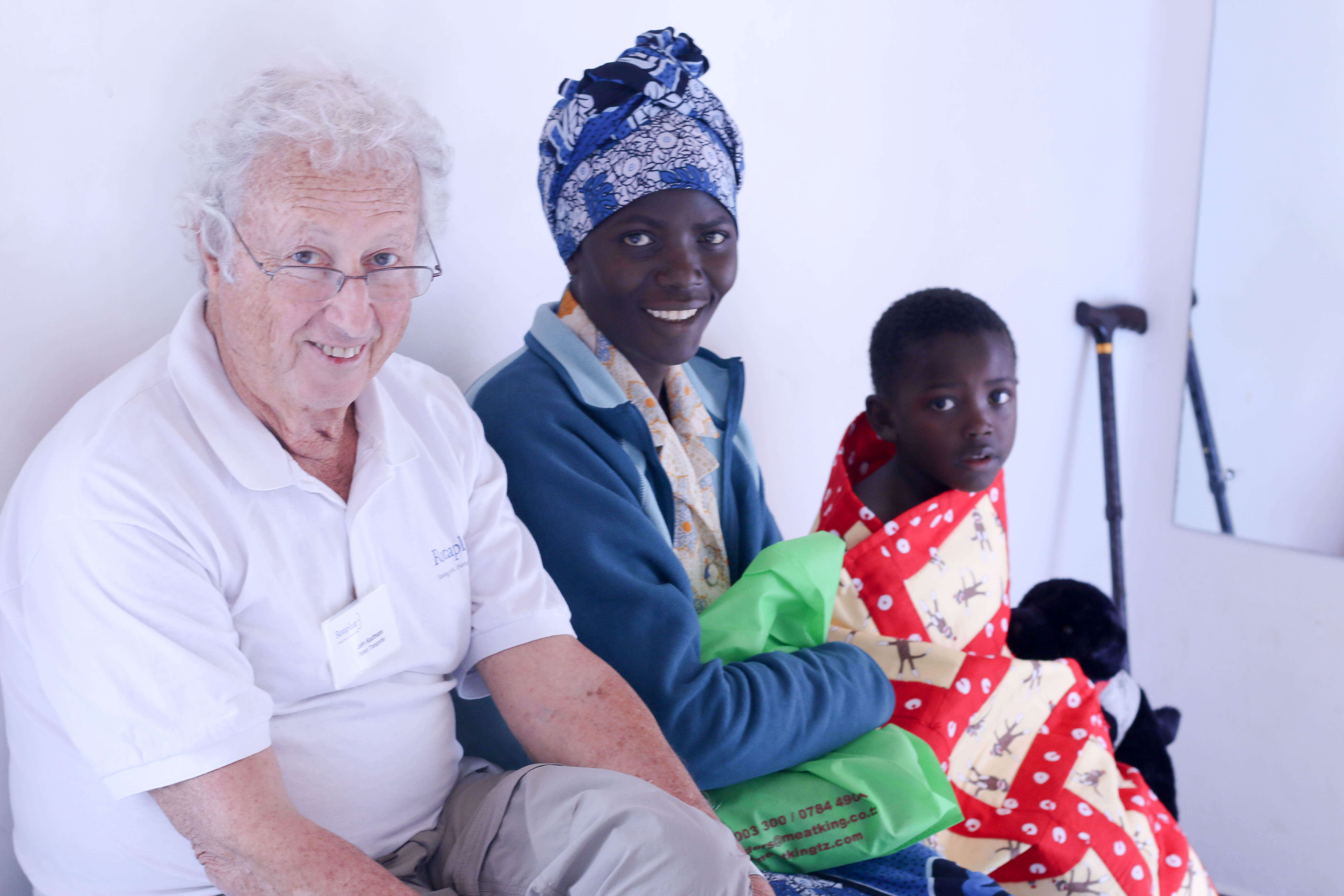 Then the unbelievable happened.  I got the opportunity to carry John into the operating room and help put him to sleep.  When it was his turn, I bent down and opened my arms for him to come cross the threshold into my arms to be carried in.  He paused- for the first time unsure of our relationship.  With a little nudge from mom, he slowly walked into my arms, searching my eyes as he bridged the distance to ascertain his faith in me.

I carried him through the hallway and into the operating room, tickling and giggling with him anytime he became aware of his surroundings.  I sat in the chair beside his operating table.  Rebecca Orlino (CRNA) placed the mask on his face and I sang to him. “John Jacob Jingleheimer Schmidt, his name is my name too, whenever we go out, the people always shout, John Jacob Jingleheimer Schmidt, da-da da-da da-da da.”  Soon he fell limp in my arms and his head sunk into my chest and at the moment I swear he took a little piece of my heart with him.  As he laid on the operating table, I felt a strange sensation that part of something inside me had been taken out and was now lying on that table, helpless and vulnerable. 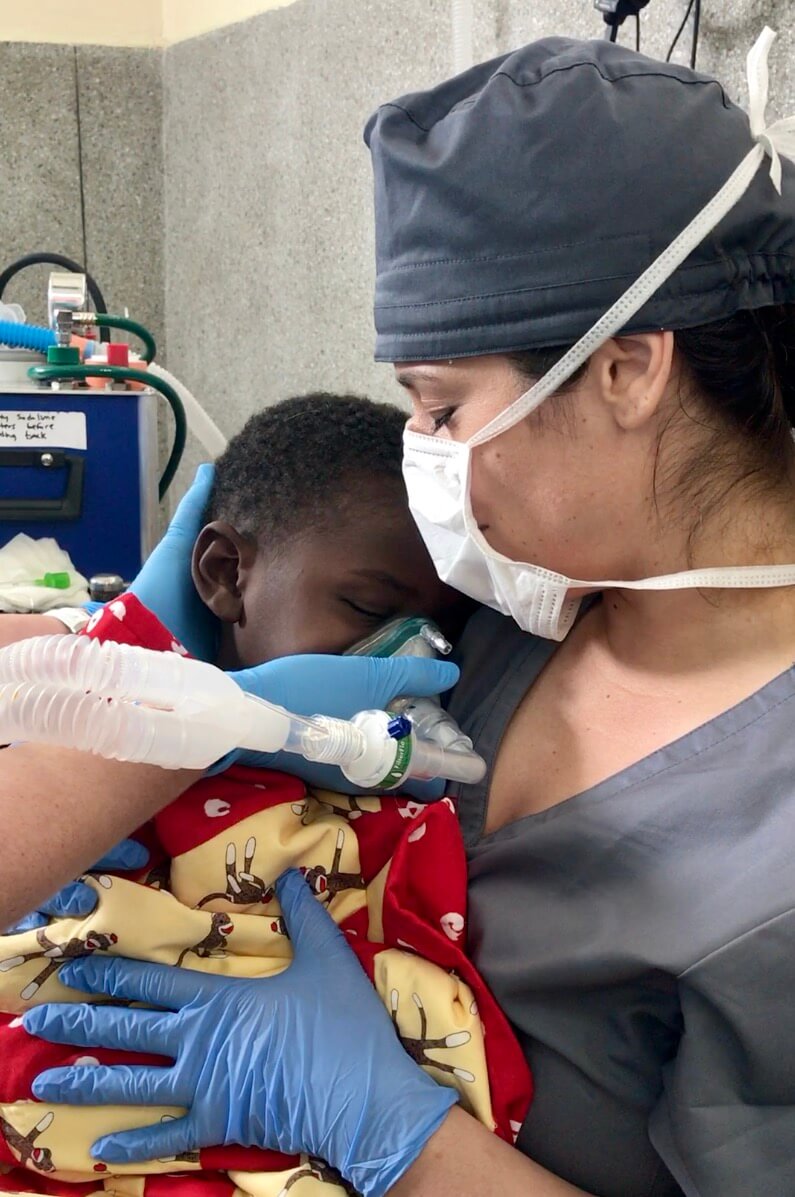 I watched the entire surgery with the utmost attention.  The medical team un-spindled his web with the magical wand strokes of scalpels and sewing needles.  Devi Tantri found and extracted magnificently some donor skin on John’s lower abdomen that would soon become the expertly crafted free-moving elbow that Jann Johnson granted back to John in a matter of a few hours. [Pictured, (top): Devi Tantri (Surgeon), Dennis Dundas (Medical Director), Jann Johnson (Surgeon) operate on John. (Bottom, L->R): Before photo of John’s burned arm. Caroline Ablort-Morgan (Occupational Therapist) wraps and splints John’s arm to train it back to straight]. 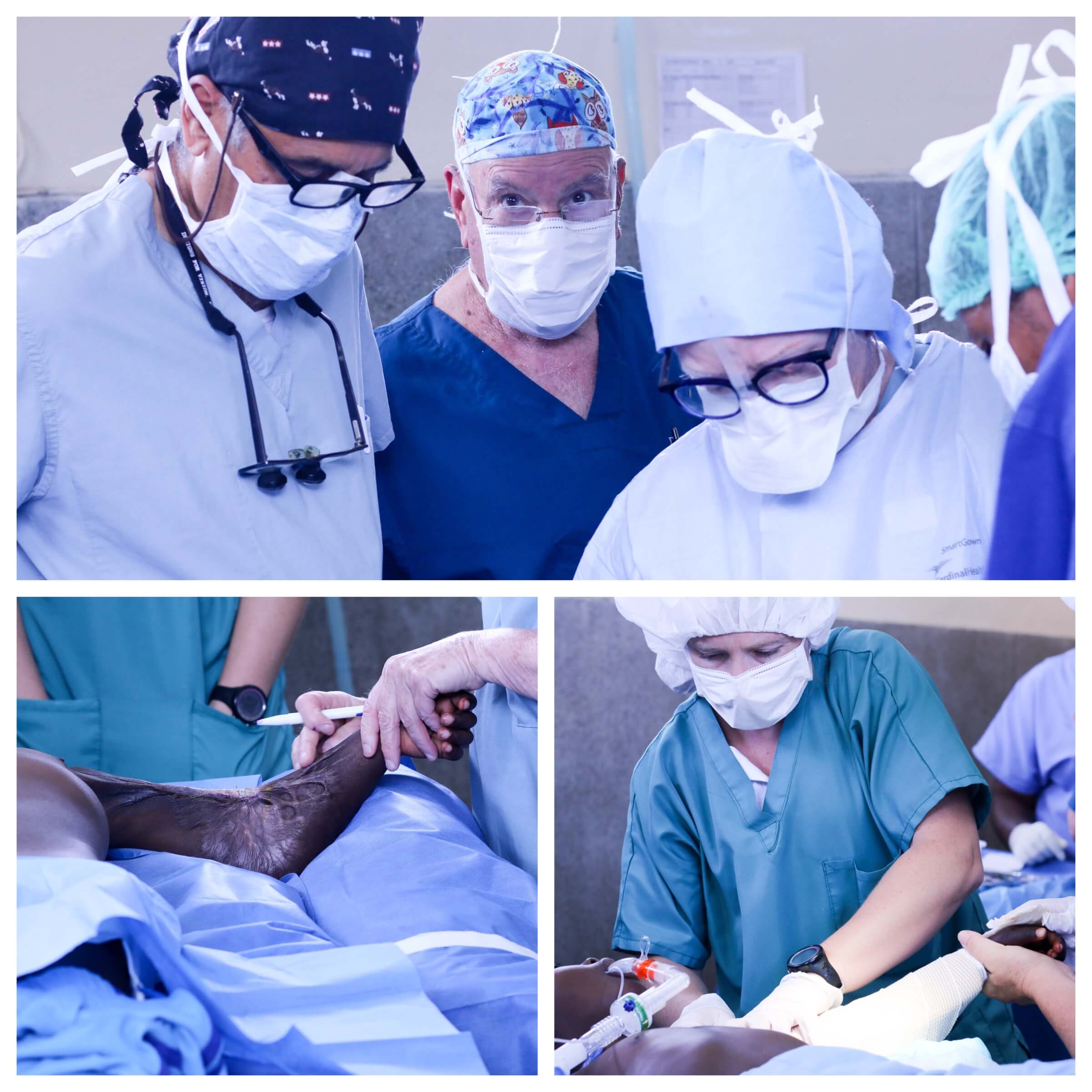 Then I was double-surprised to be offered the opportunity to carry him off the operating table and into PACU as he awoke.  As I carried this limp, little body down the hallway with the most brilliant medical team around me- it was truly one of the biggest highlights of my life.  Upon waking, he had a bit of a rough time, which sometimes happens, as we stayed the course holding him and coo-ing his name as his sobbed.  When he calmed down and his mother came in, she seemed very anxious to see him.  As I hugged her and pet him, she pointed at him and said what was translated to, “your Johnny”.  She could see how much he had come to mean to me and said that it was clear to her that the team here is acting from their hearts, as she grasped her own heart in illustration.

We came to find out that, although his accident was originally described as “falling into a pot of boiling water”, that may not have been the case.  John will be recovering from his surgery at The Plaster House, where the mother asked if “he’d be safe there”.  The incredible nurse and interpreter Hannah Kelly reassured her that he would be.

She came in with sunglasses on, to hide her face as much as possible.  From her marbled skin color you could tell she had been badly burned.  She told us it happened while cooking.  1.2 billion people ... Read More »

The desire to go on medical missions to another country is not something that everyone universally understands or shares.  The hours are long, the conditions can be rough, the locations are often unfamili... Read More »

What are the different motivations for going on a medical mission?  In part 2 of “Purpose” we explore the rest of the teams’ answers. Jann Johnson (Surgeon): I was asked to go in 1991 an... Read More »