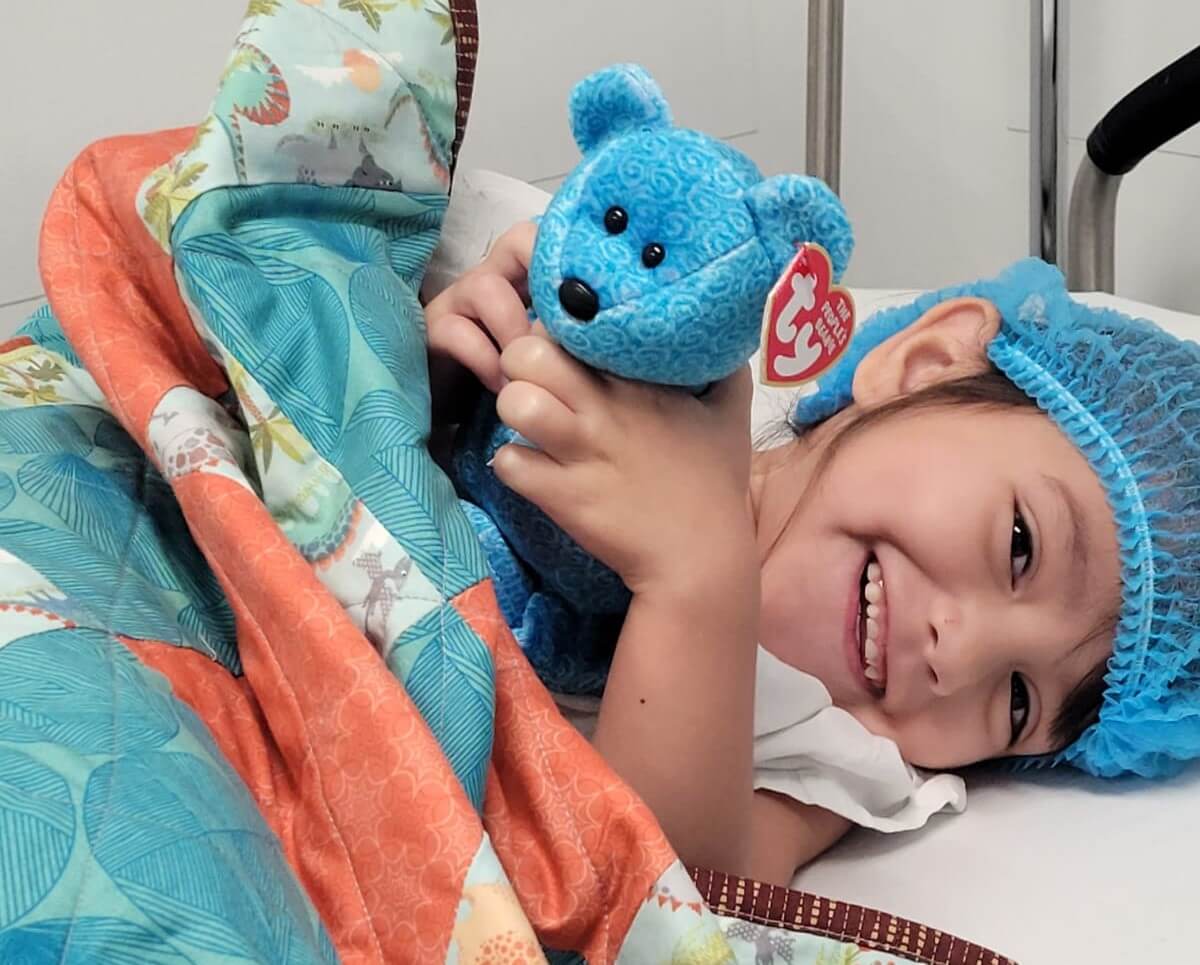 Even though we arrived at the hospital at 6:30am, we have one patient here already waiting for his surgery.  After setting up, I accompanied the doctors on their rounds this morning checking on the five patients that were admitted after their surgeries yesterday, (Andres David, Angely, Eduar, Ketty, and Rudiela).  Since I hadn’t posted the blog from yesterday yet, I included the pictures of the rounds in yesterday’s post since it included information on their surgeries.

On this mission, we were scheduled to have two days of clinic and the rest were supposed to be surgery days.  However, our second clinic day did not have nearly as many families arriving for evaluations as was expected.  It seems there may have been some mis-communication.  This meant that both yesterday and today, we had patients arriving for scheduled surgeries and potential patients arriving to be evaluated.  We took the surgery patients first and had the others wait until they had cleared the evaluation area.

On the day of surgery, patients are given a COVID test prior to being evaluated by the pediatrician and nurses to make sure they are in good health for surgery.  Then they sit in the waiting area until it is their turn.  Ten surgeries were performed today.  We had to bring in more tables and chairs to accommodate everyone waiting.

In addition to the activities Sandy put out on the tables, our Assistant Mission Director Juan Gallego’s God-son (Juan’s cousin’s son), David (goes by El Cari) was here to draw with the kids.  El Cari is a publisher and professional artist/cartoonist.  Juan asked him to come and draw caricatures for the kids waiting for surgery.  El Cari did more than that.  He brought paper, crayons, and special pens for the kids to use.  He taught mini drawing classes, teaching the kids to draw Hello Kittie and Micky Mouse.  He also did caricatures of the kids and let them color them in.  It was a popular table in the waiting area. 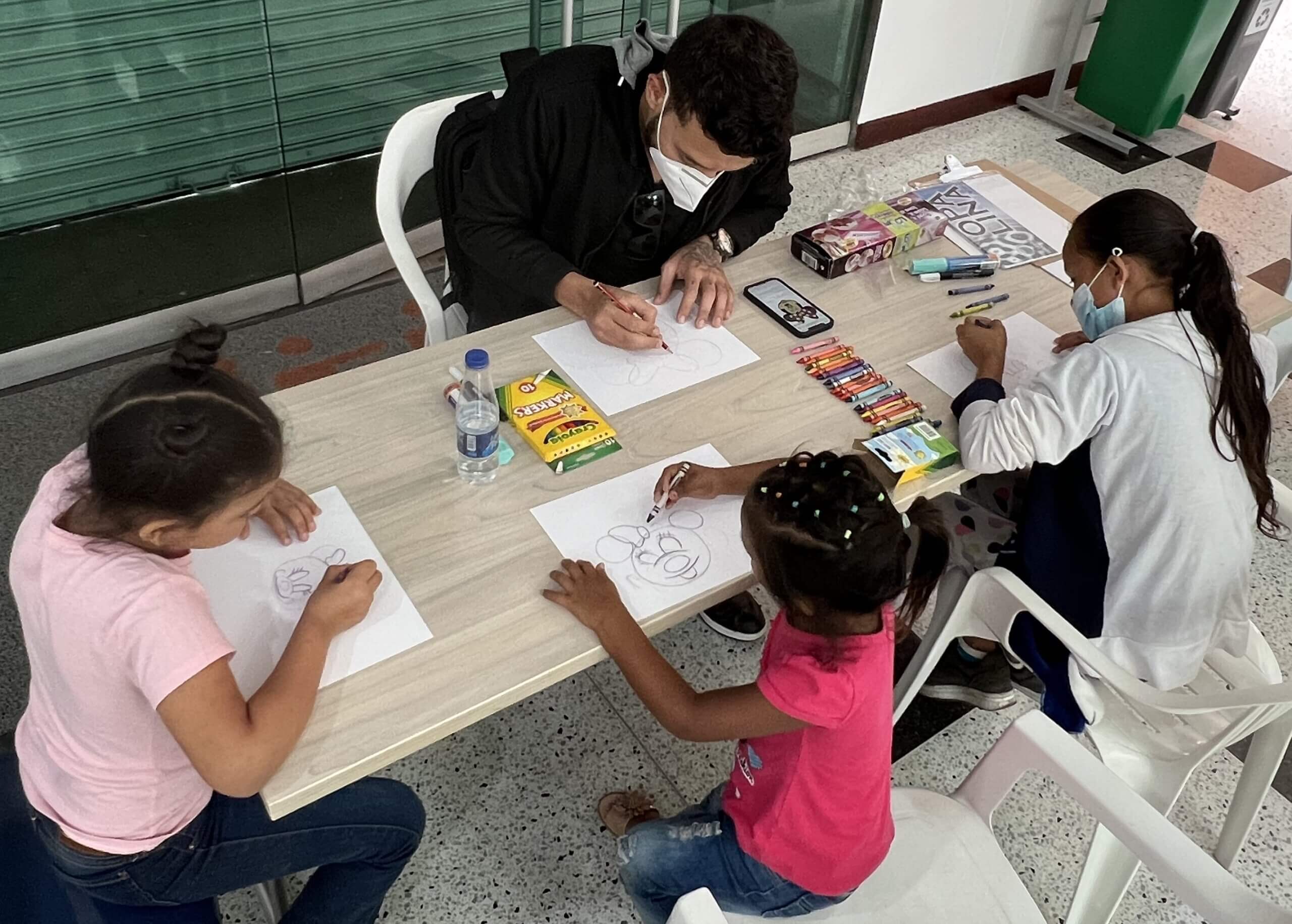 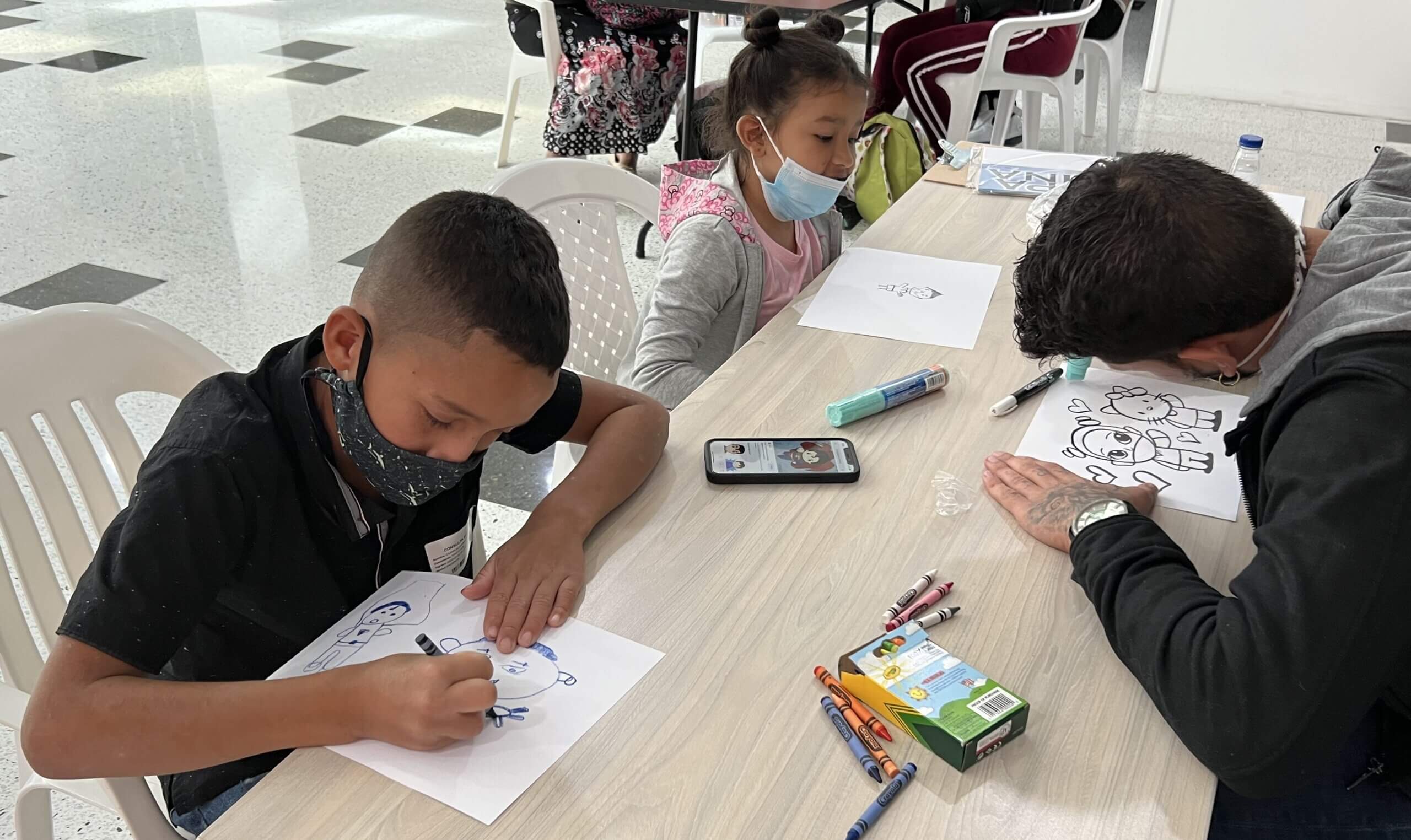 Juan Gallego is not only our Assistant Mission Director, he is our “go to” guy for everything.  Whatever is needed, Juan “knows a guy” or “has a cousin who”.  He definitely is well connected here.  He has been a Rotarian in the Chelsea Rotary Club in District 7930 for 22 years and president in 2012-2013.  This is his 10th Rotary mission: 7 in Columbia, 2 in the Phillipines, and 1 in Chile.  He has done most of the non-medical jobs and this is his second time as Assistant Mission Director.  He said that after his first mission, he was hooked.  He is a Real Estate Broker & General Contractor. His sister Margarita and her husband John have been here every day volunteering to help with medical records and intake interviews. 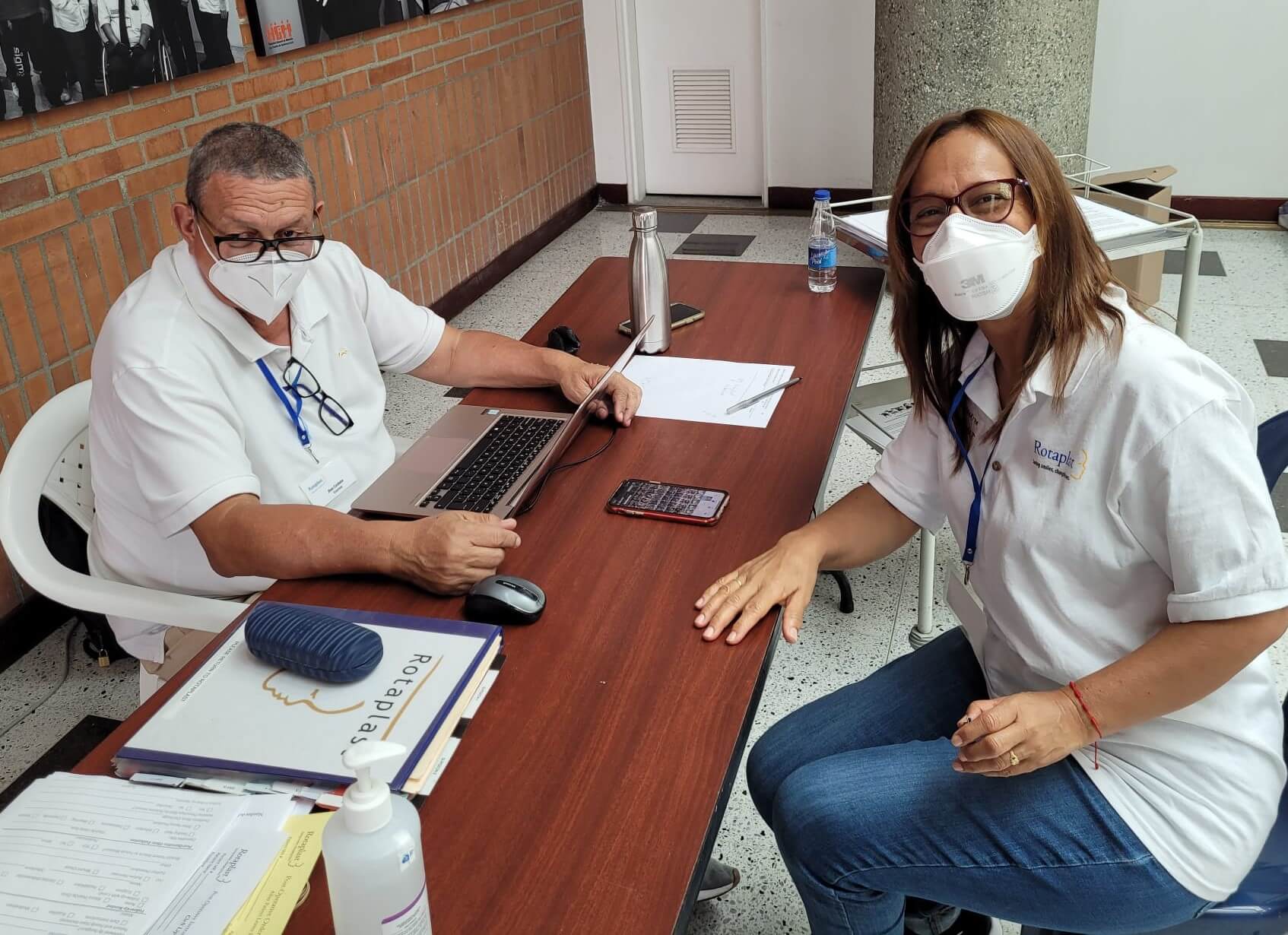 One of the patients that had surgery today is eight-year-old Karlys.  She lives here in Medellin now.  Until 1 ½ years ago, the family lived in Venezuela.   Due to her cleft palate, she has a speech impediment.  She was bullied in school because of this.  These two factors affected her education and she was held back.  Karlys is only in the 1st grade.  She was on a waiting list in Venezuela to have surgery to repair her palate.  Her family left Venezuela because of the government.  She was placed on a list here and was notified via phone call about this Rotaplast mission.  Her family was very hopeful that she would be chosen for this surgery.  They are very grateful that she was.  She will be getting a primary cleft palate repair. Photos: intake picture, coloring her caricature, pre-op 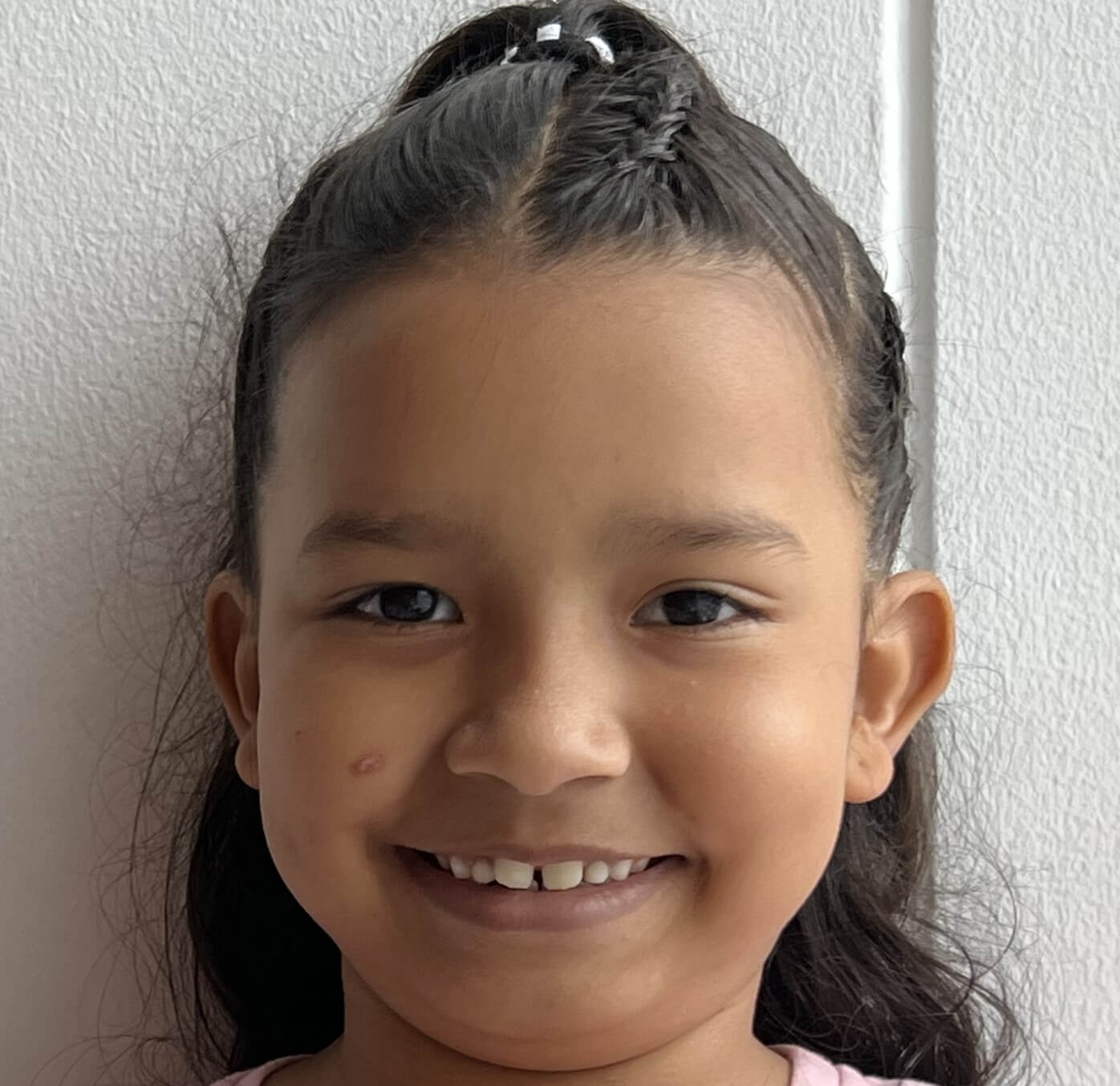 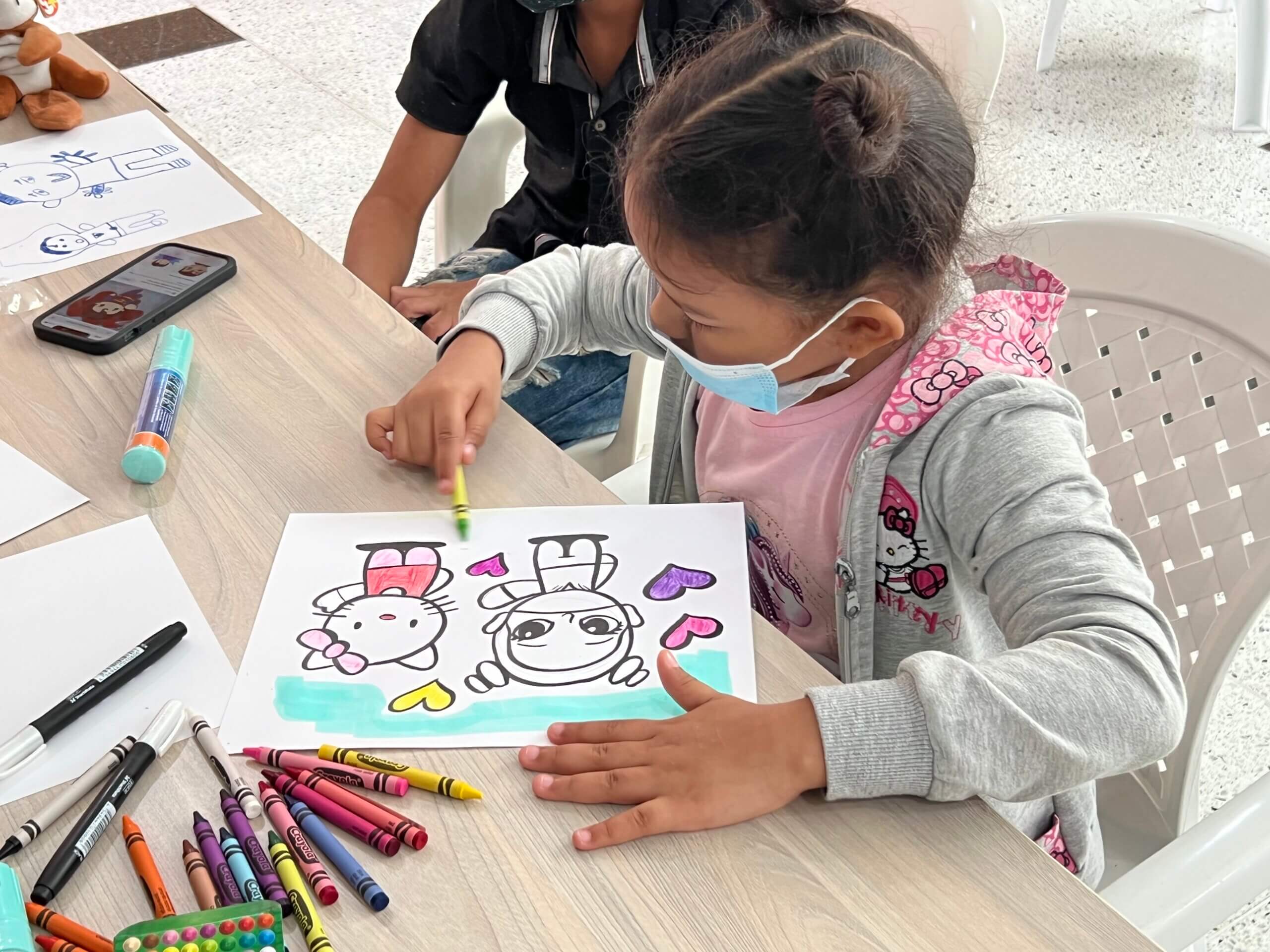 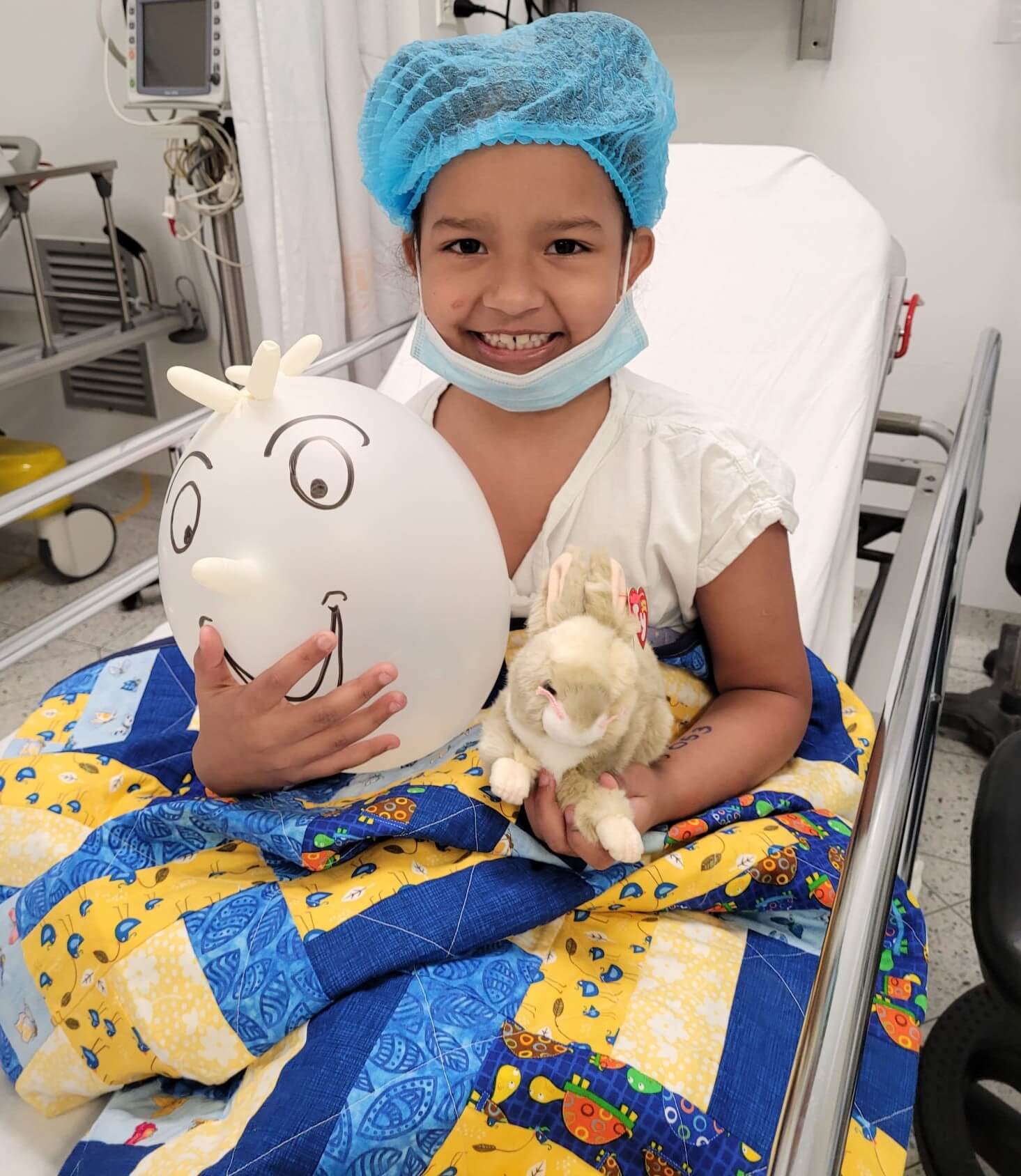 Mikol is 11 years old and travelled five hours to get here.  He was brought here by Marina Sosa.  Marina used to be Mikol’s neighbor.  She now lives in Medellin and told Mikol’s family about Rotaplast and this mission.  His mother couldn’t travel with him due to having two other children who needed her at home.  One is an infant, the other is an older child who is bedridden and has had four surgeries.  She felt strongly that Mikol should come so she brought him.  He has a cleft lip and palate that were poorly repaired once.  He has constant bad breath.  Mikol also gets nose-bleeds so often that he carries a cup with him to catch the blood.  He is bullied by one child at school. Marina is so very grateful for what Rotaplast is doing for kids.  Mikol will be getting a palate/lip revision. Photos: intake picture, pre-op 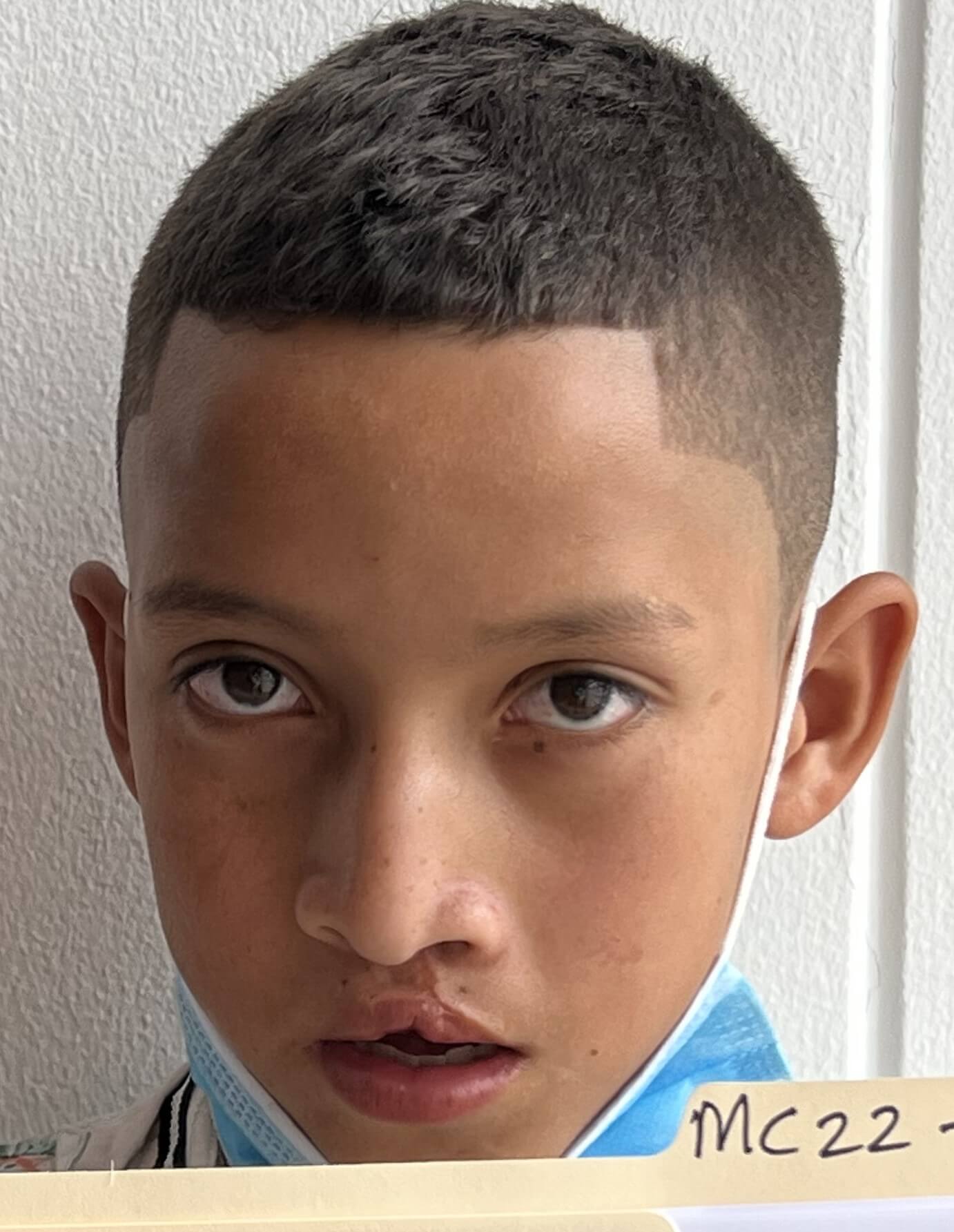 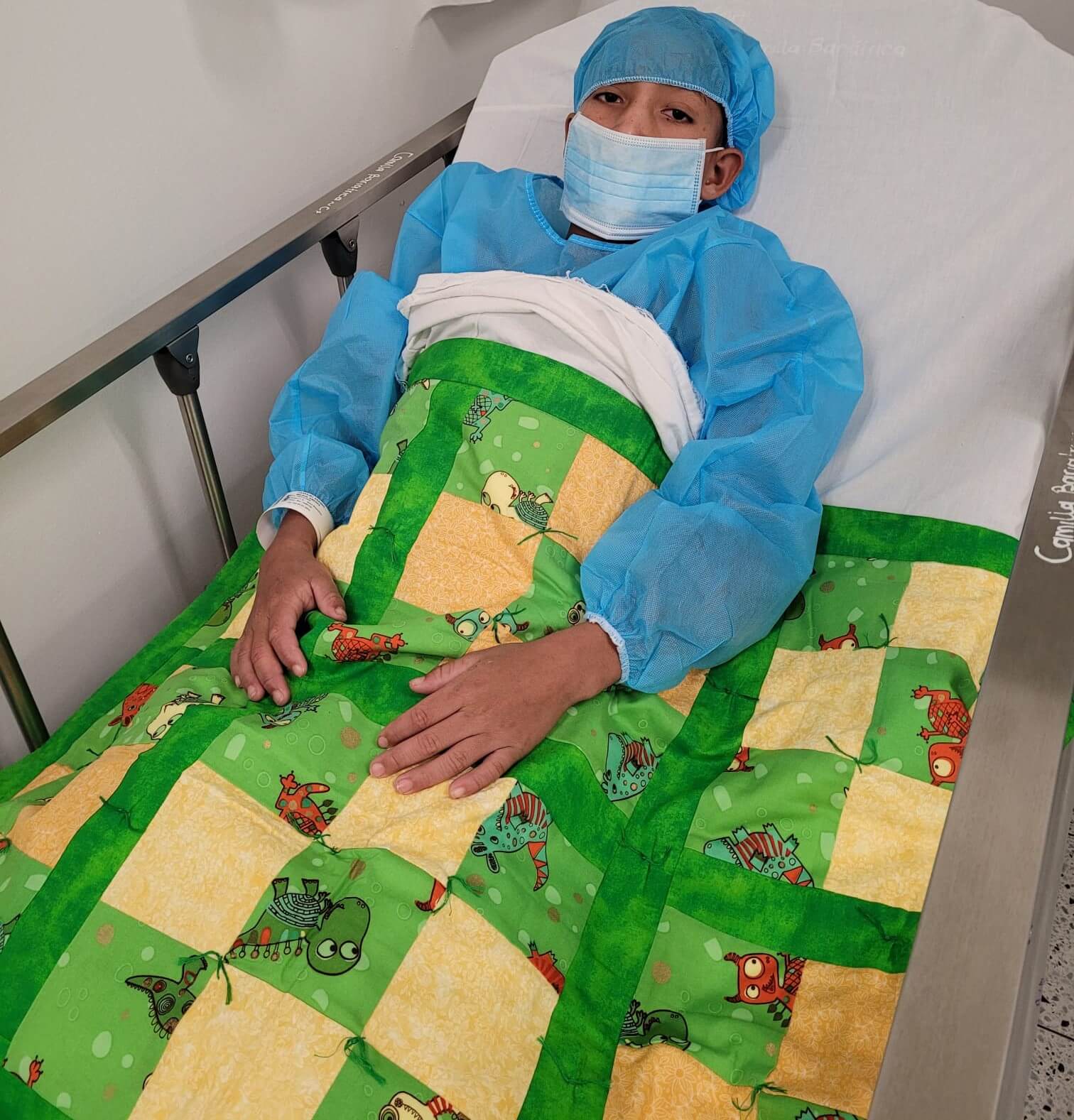 James is 23 and travelled 6 hours to get here.  He arrived on Monday and has been staying with a friend in town until he needed to come for his scheduled surgery.  James’ grandmother, who lives in Medellin, came with him today.  James had a cleft palate repair done about 6 years ago and the lip another time.  He feels neither surgery was done well.  He cannot breathe out his nose and must always keep his mouth open a little so he can breathe.  He also has difficulty speaking clearly.  James has had a hard life.   He wants this surgery because he hopes he can be “normal” and speak better.  James will get a bilateral lip revision.  Photos: intake pictures, drawing with grandma while waiting, pre-op 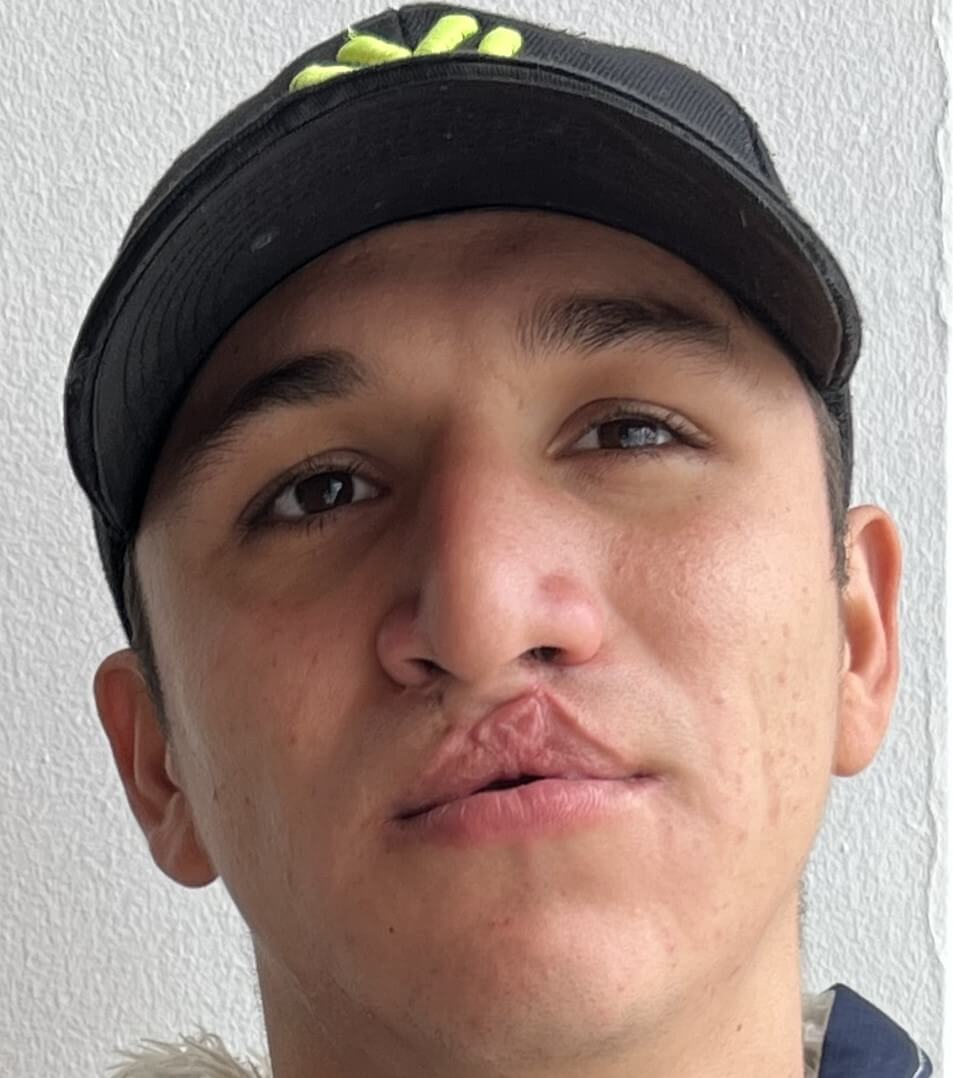 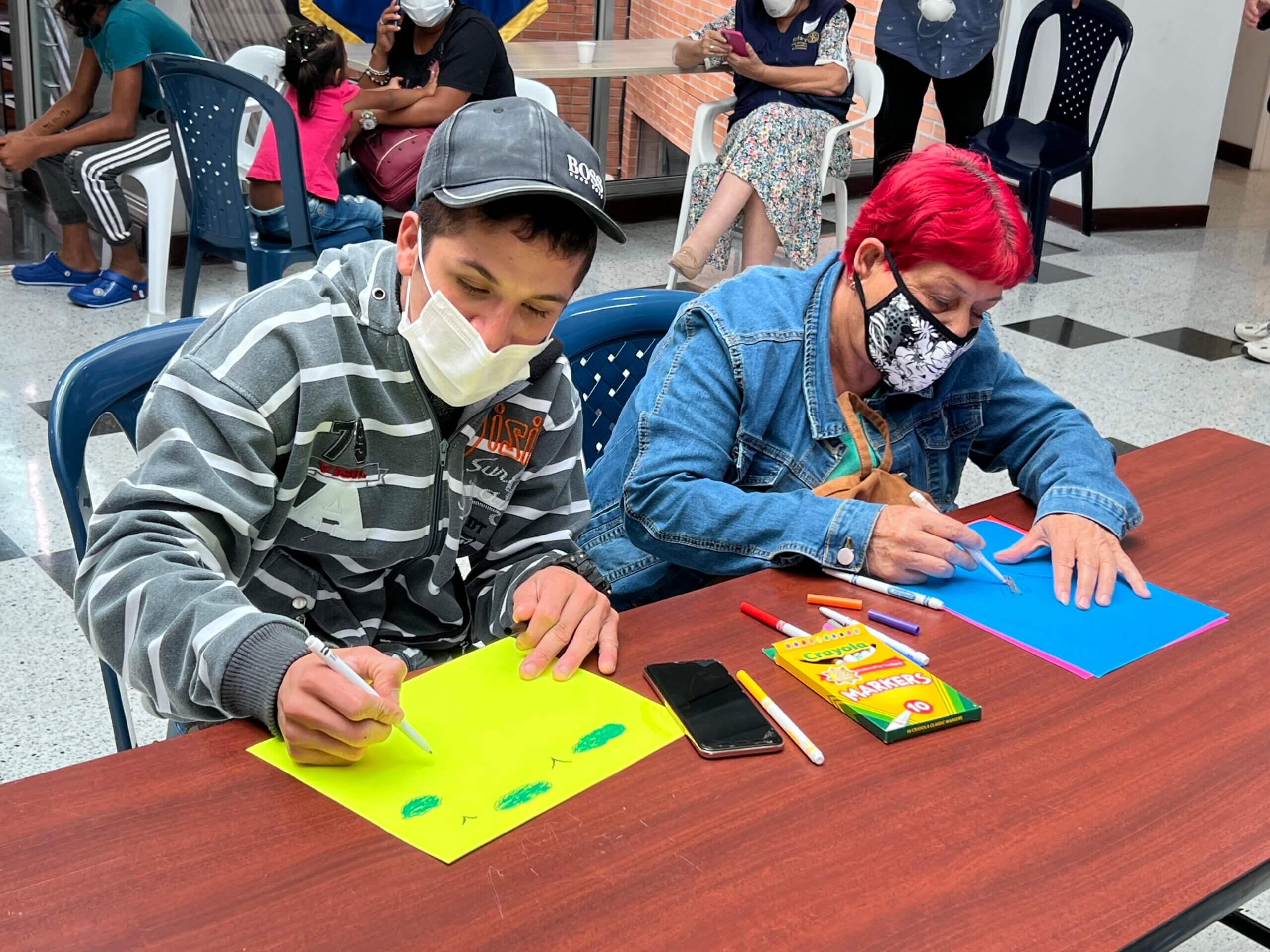 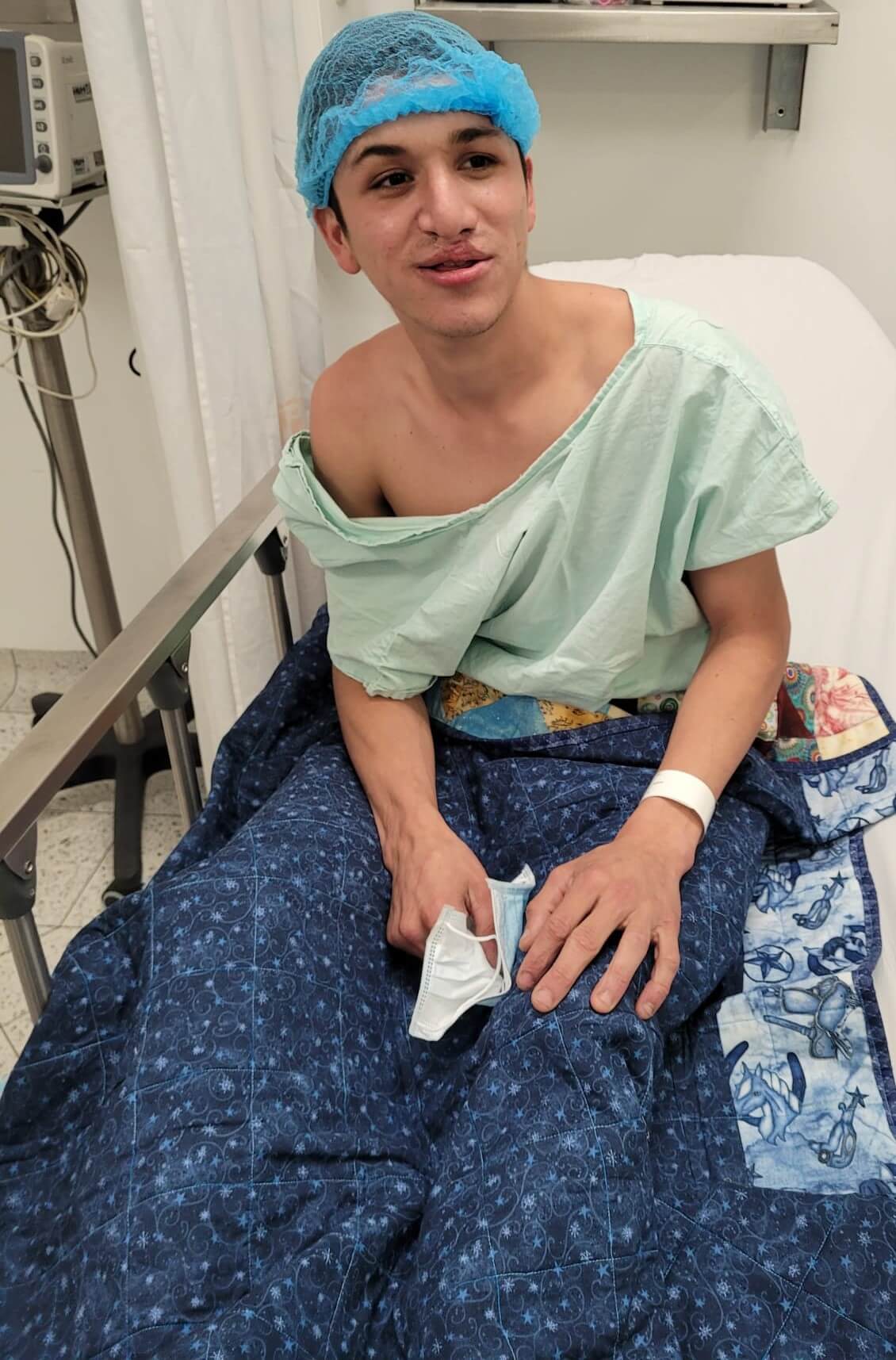 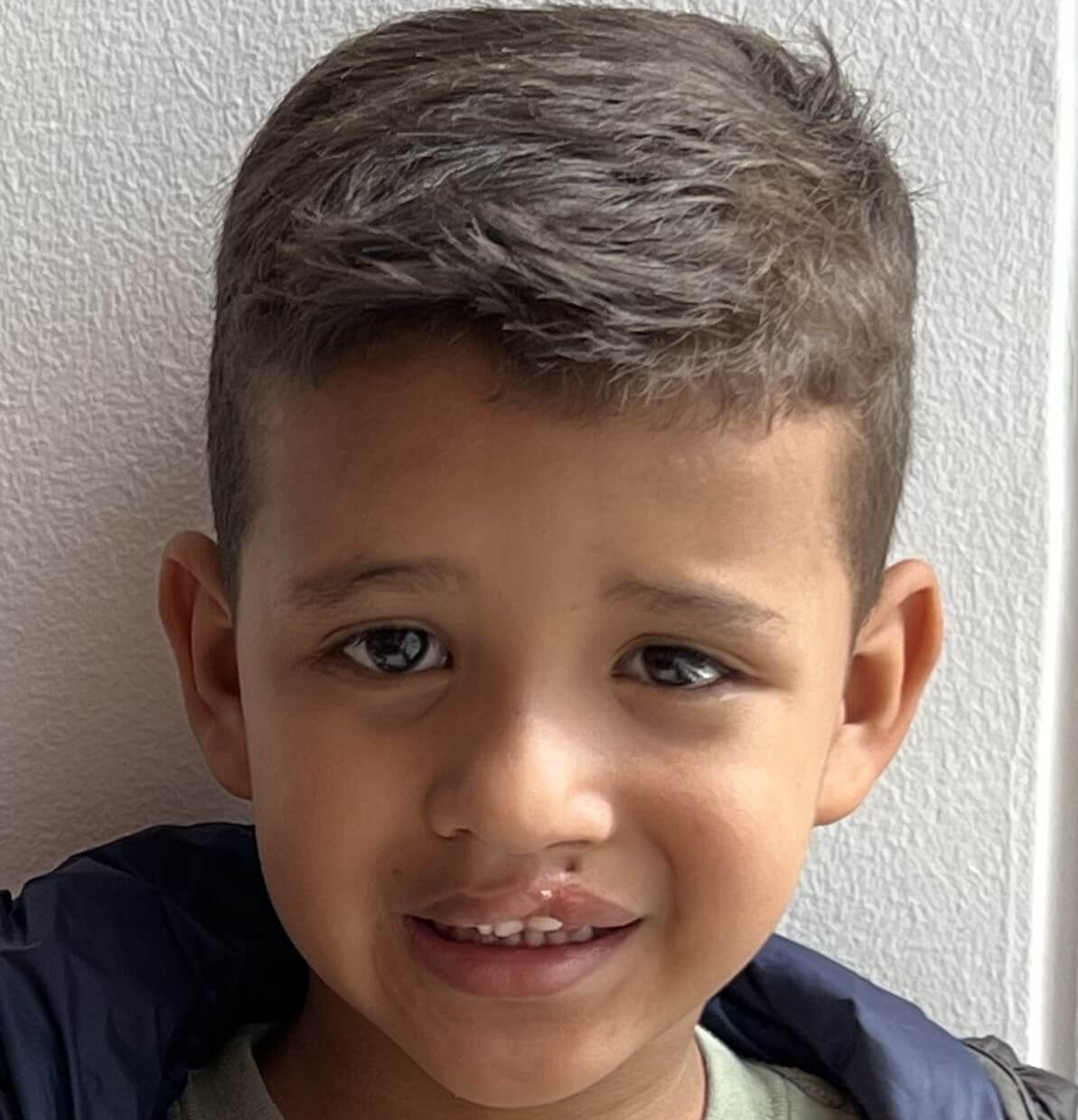 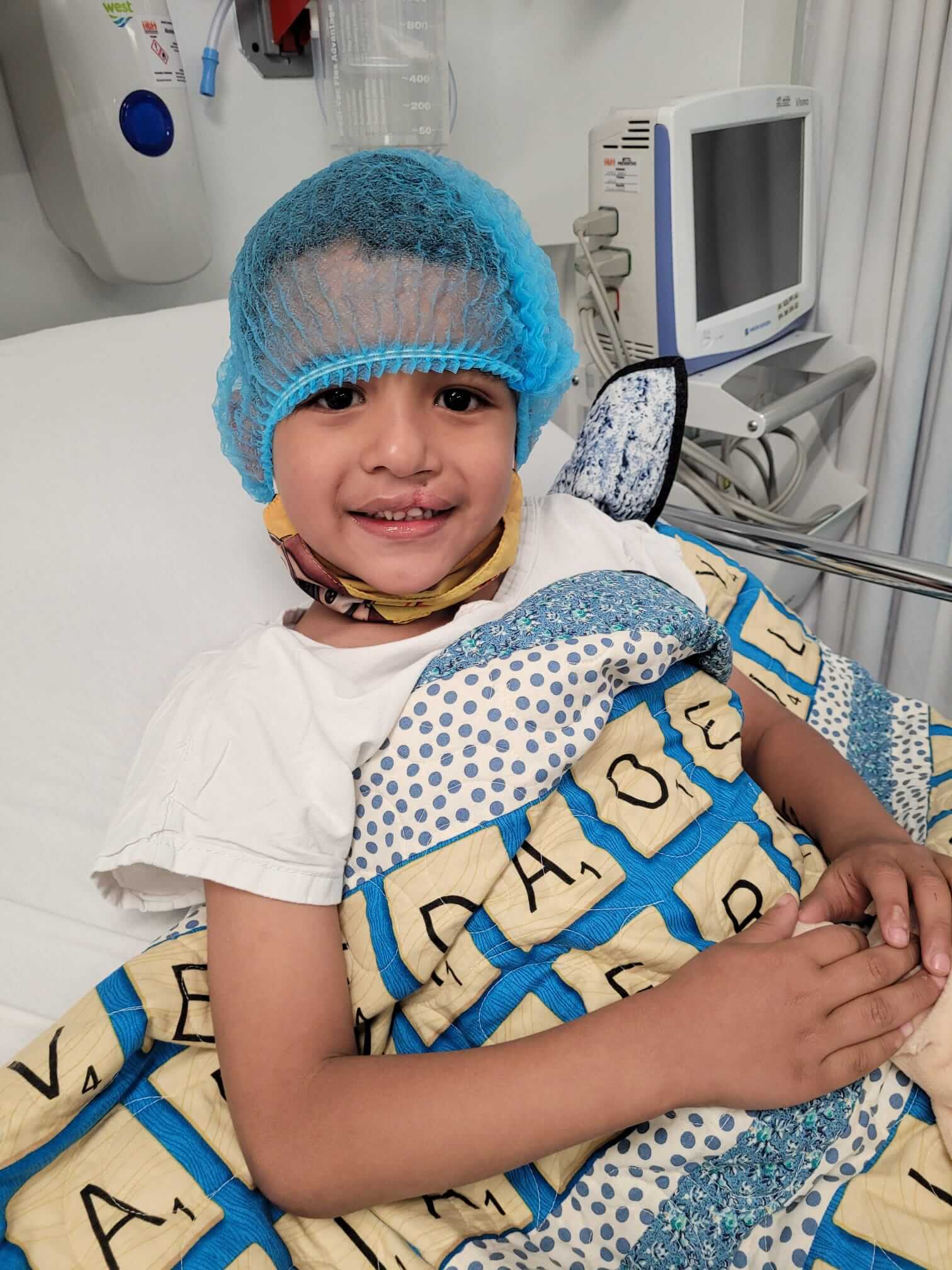 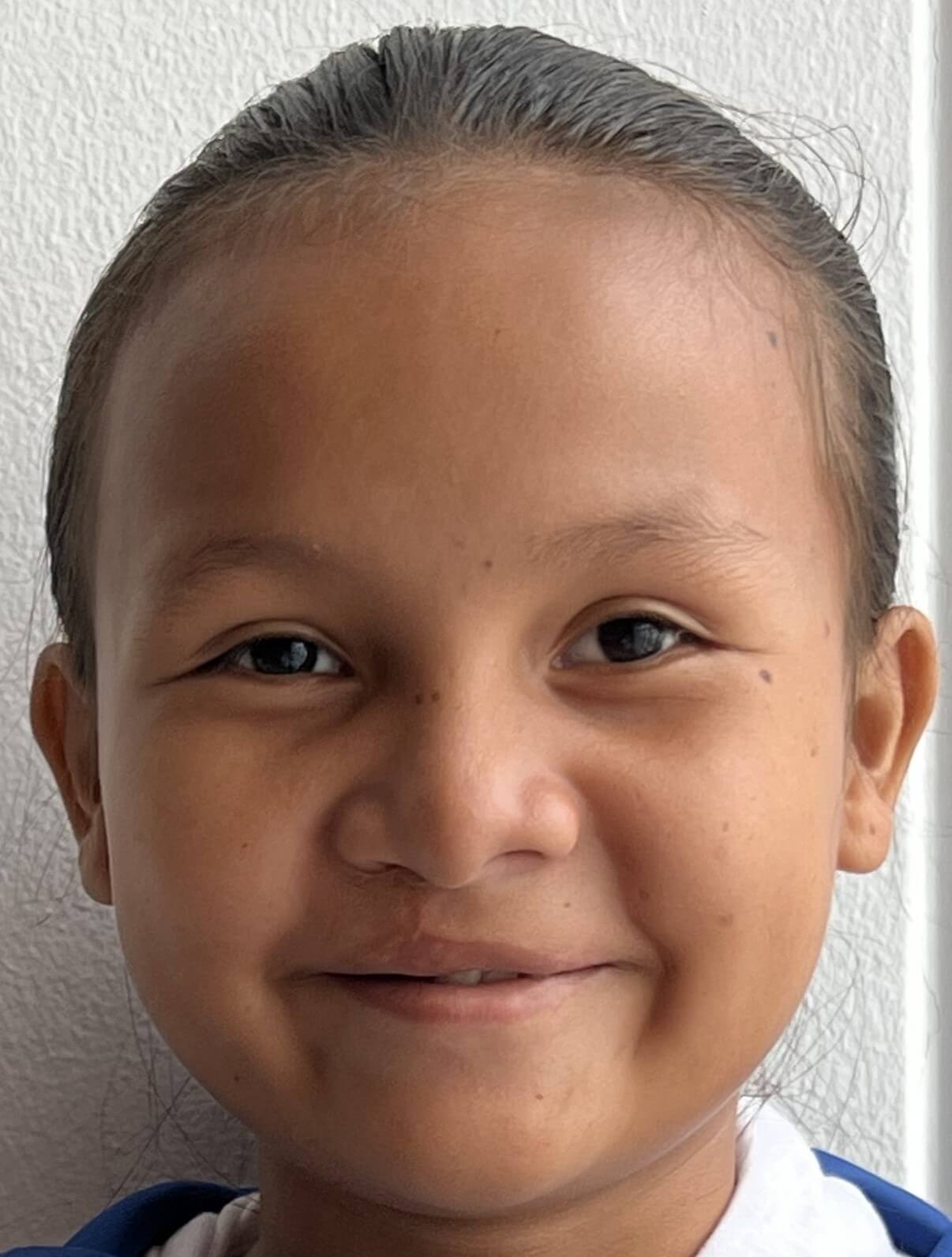 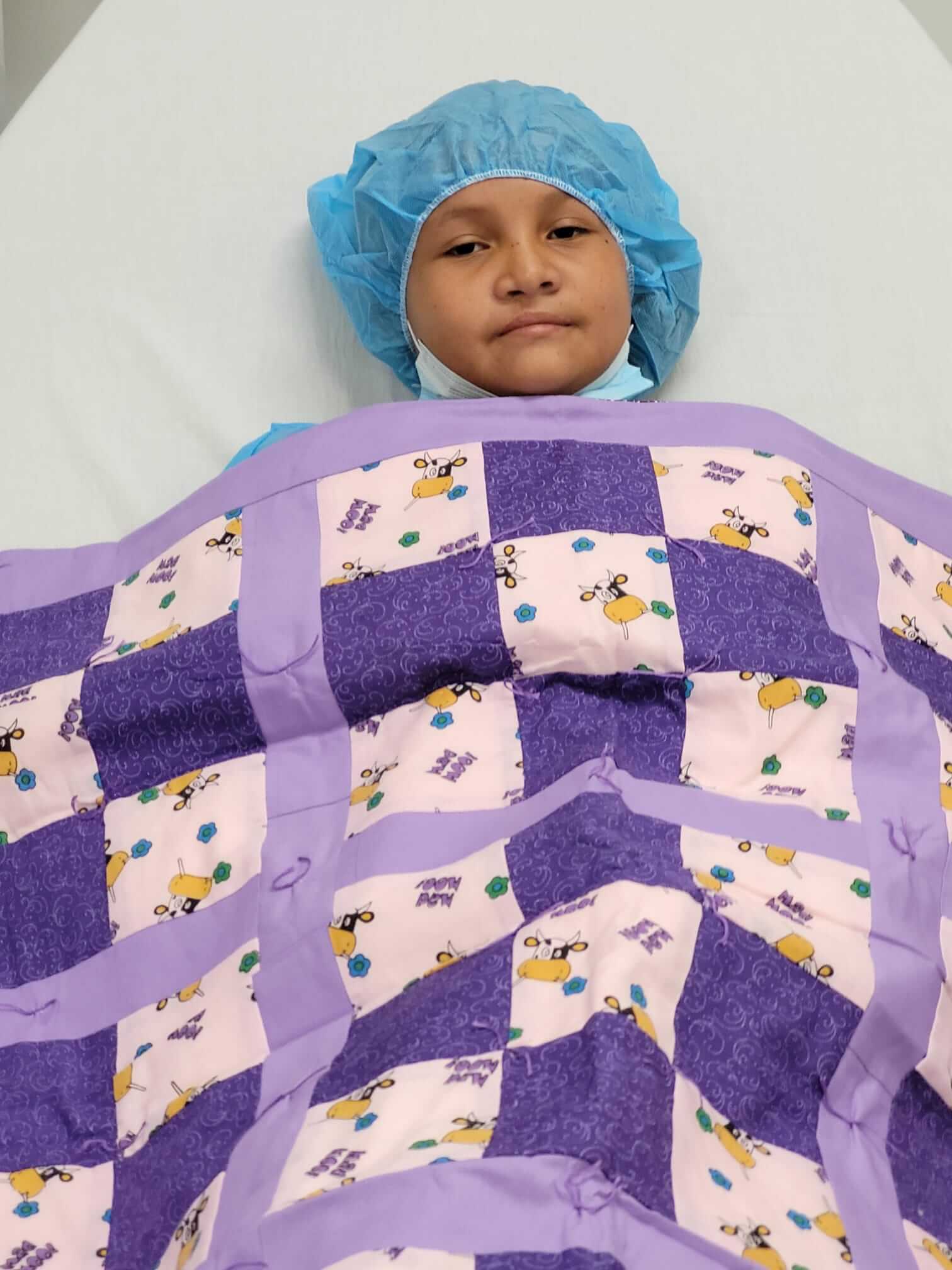 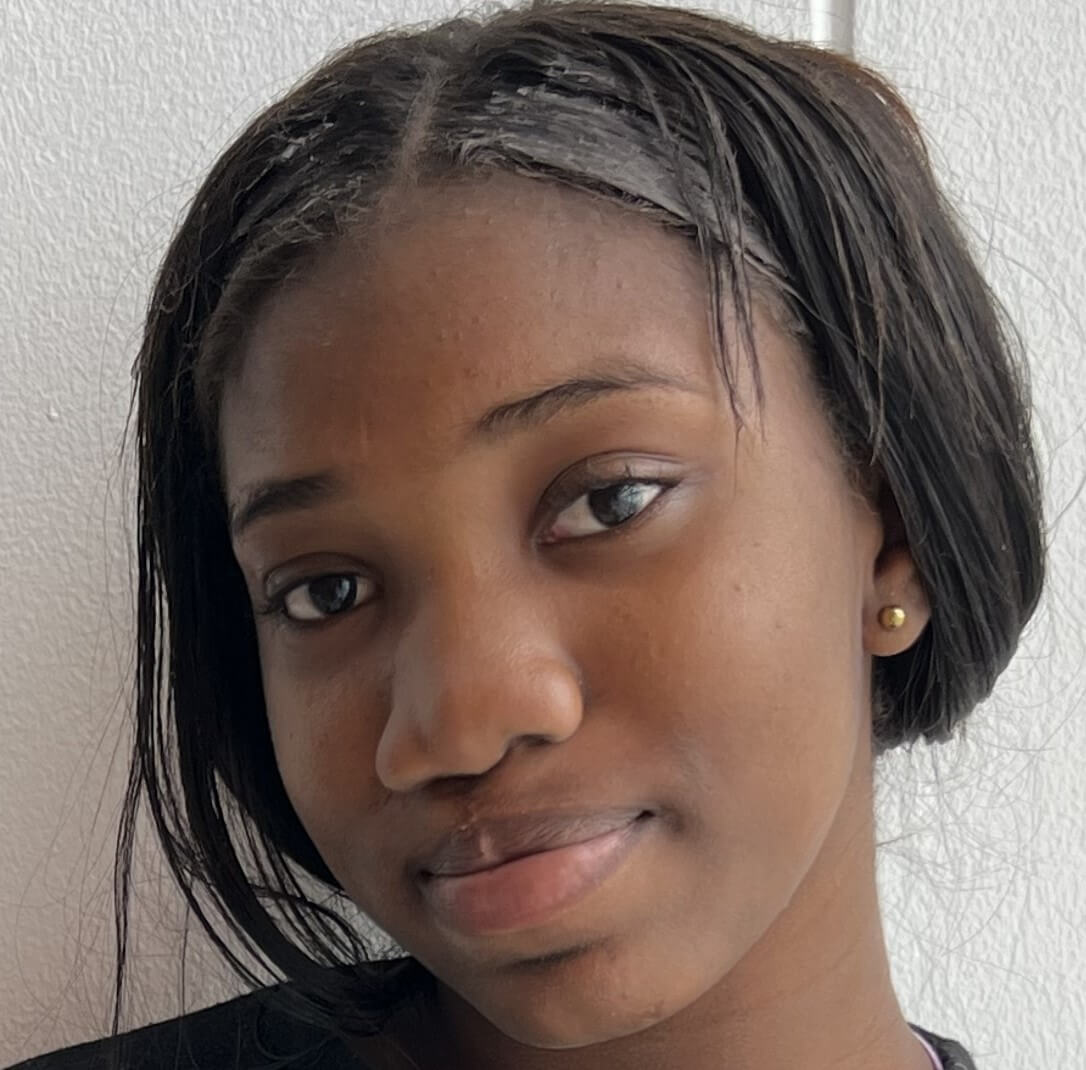 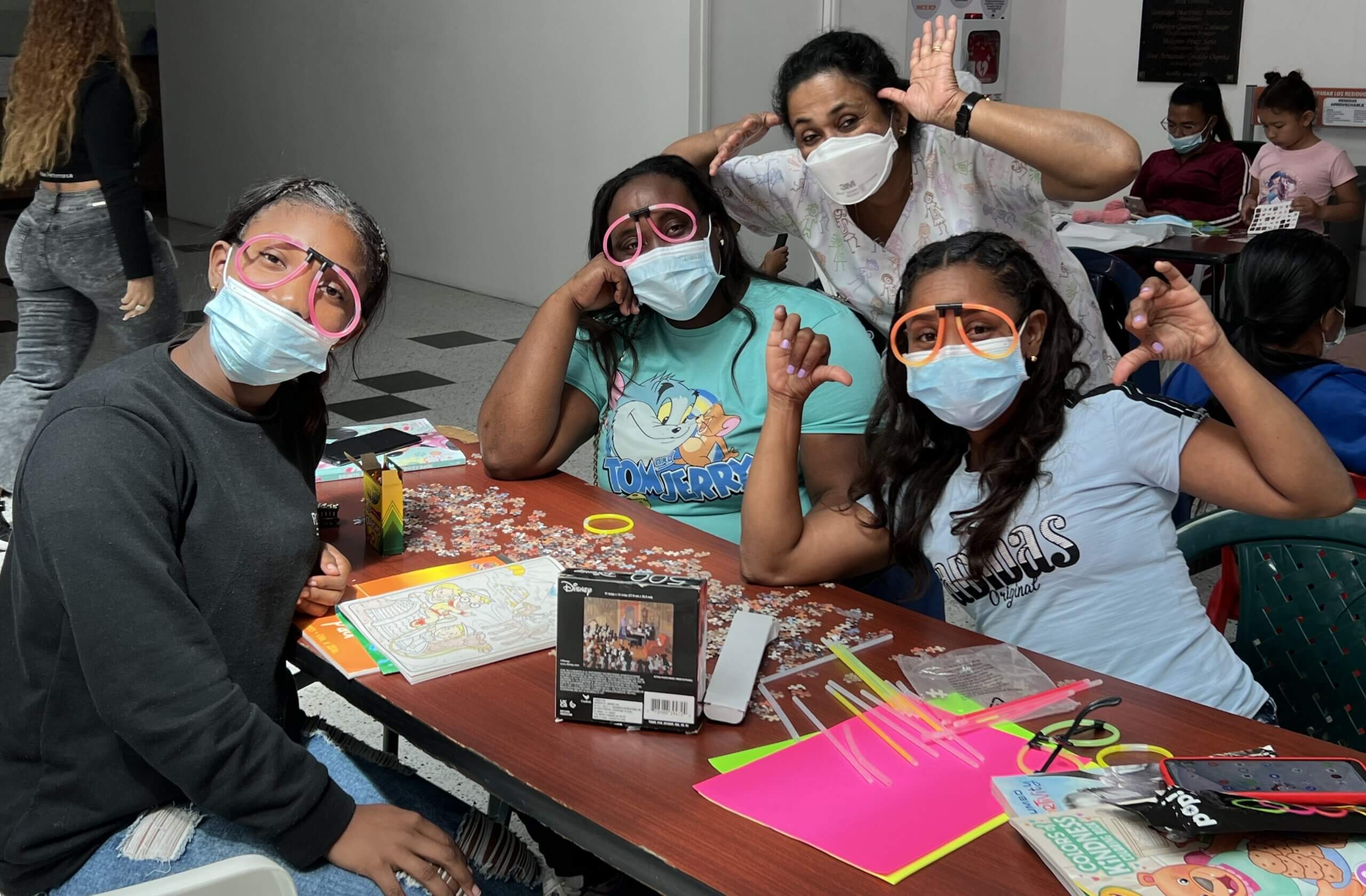 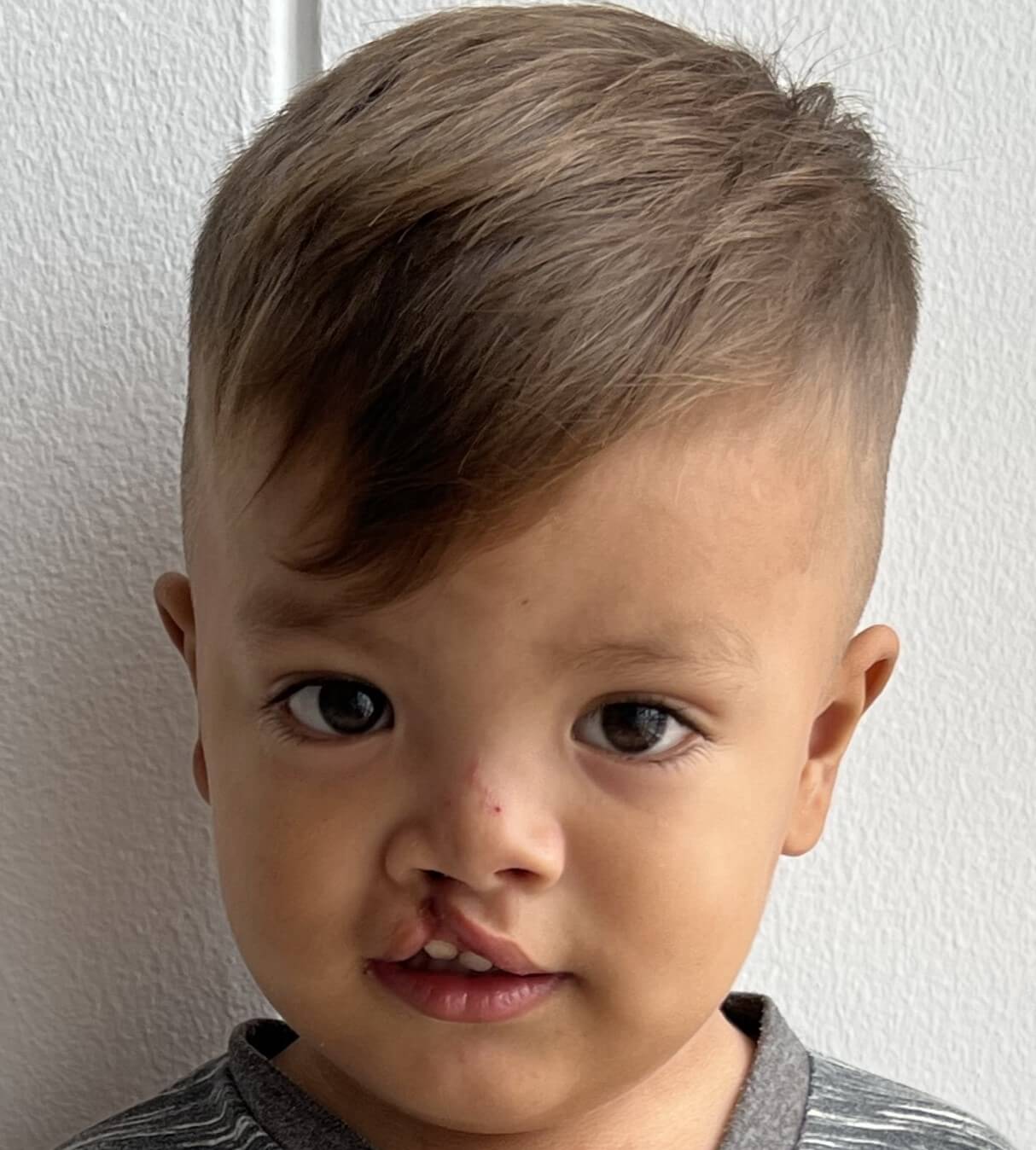 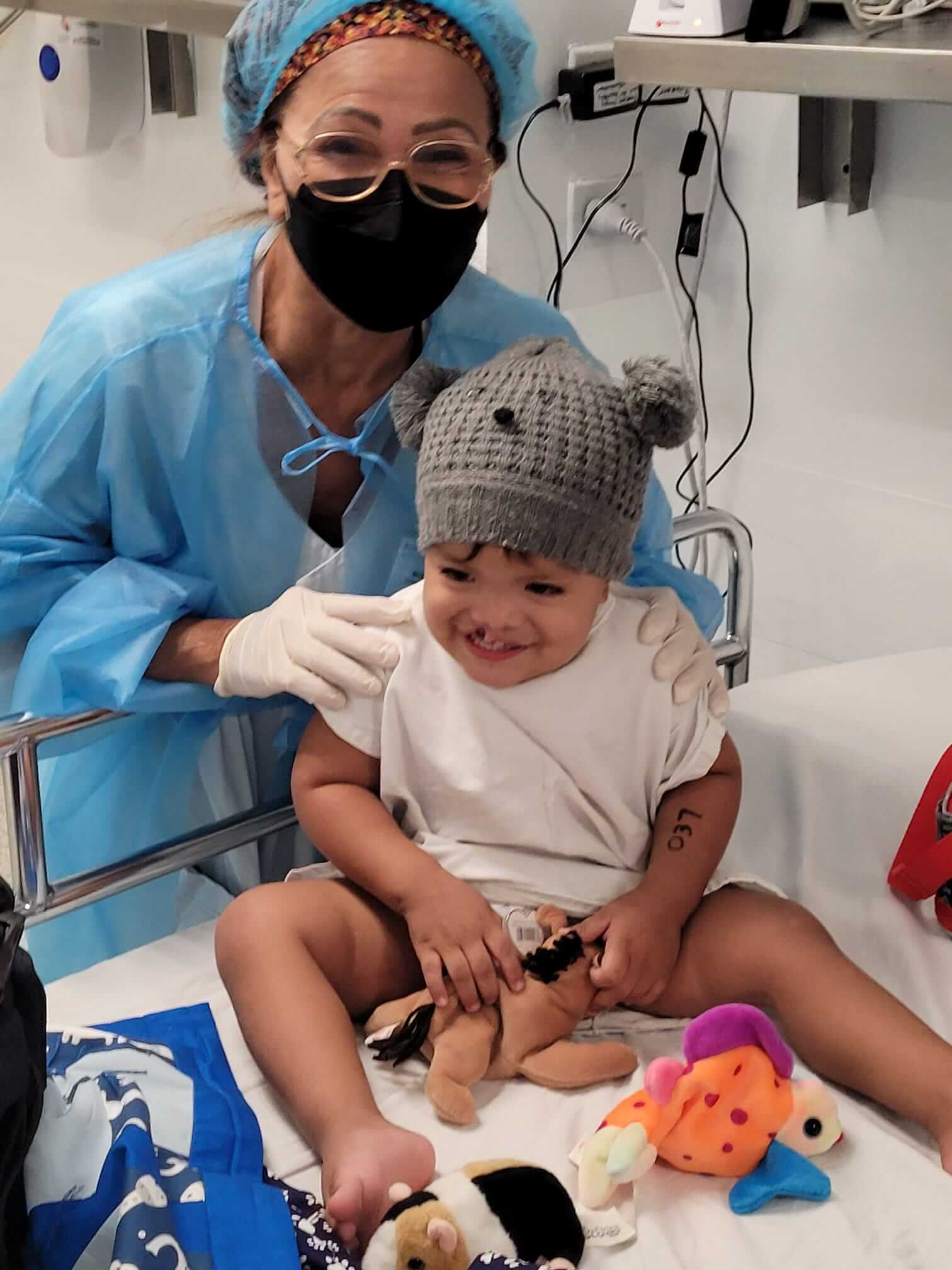 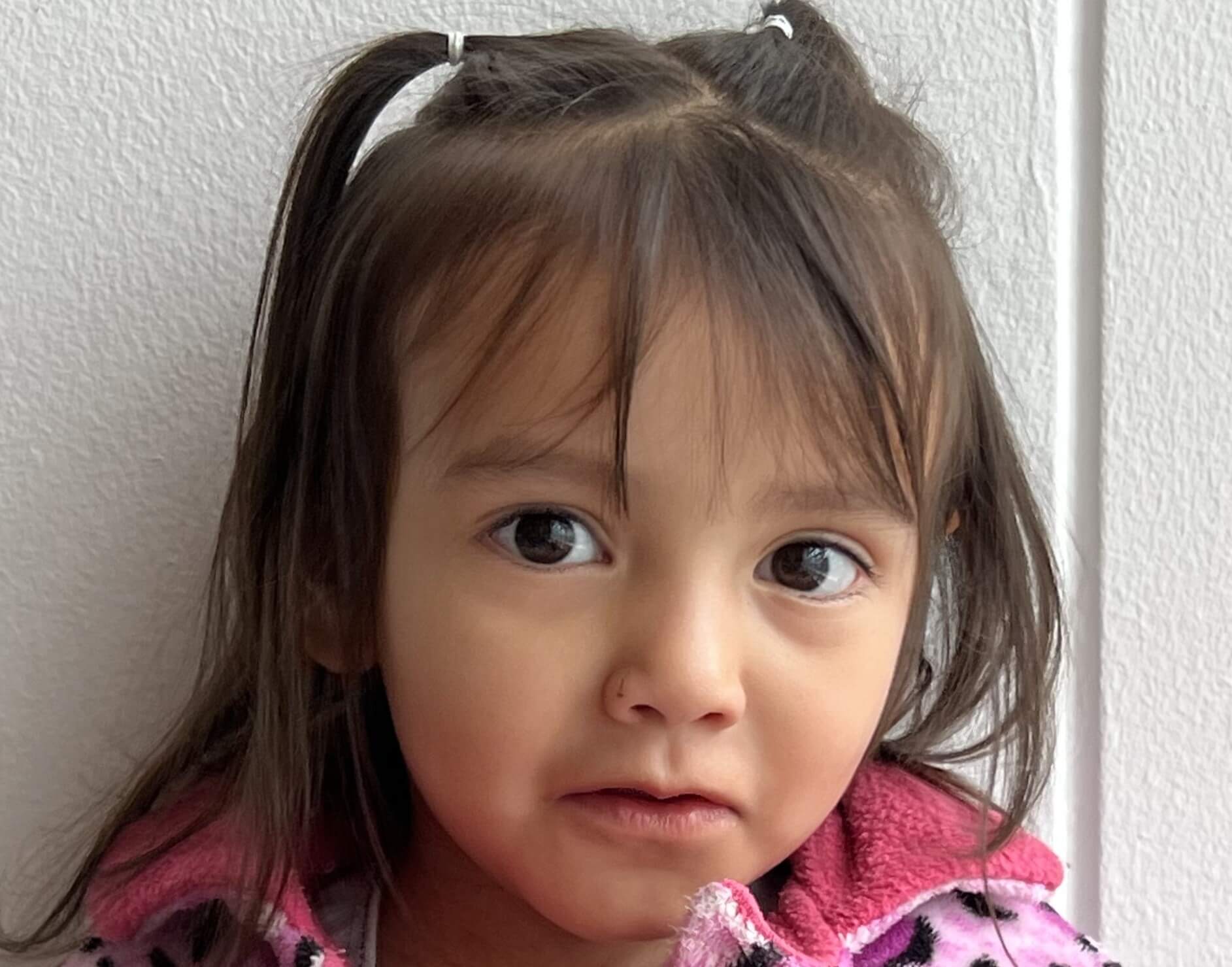 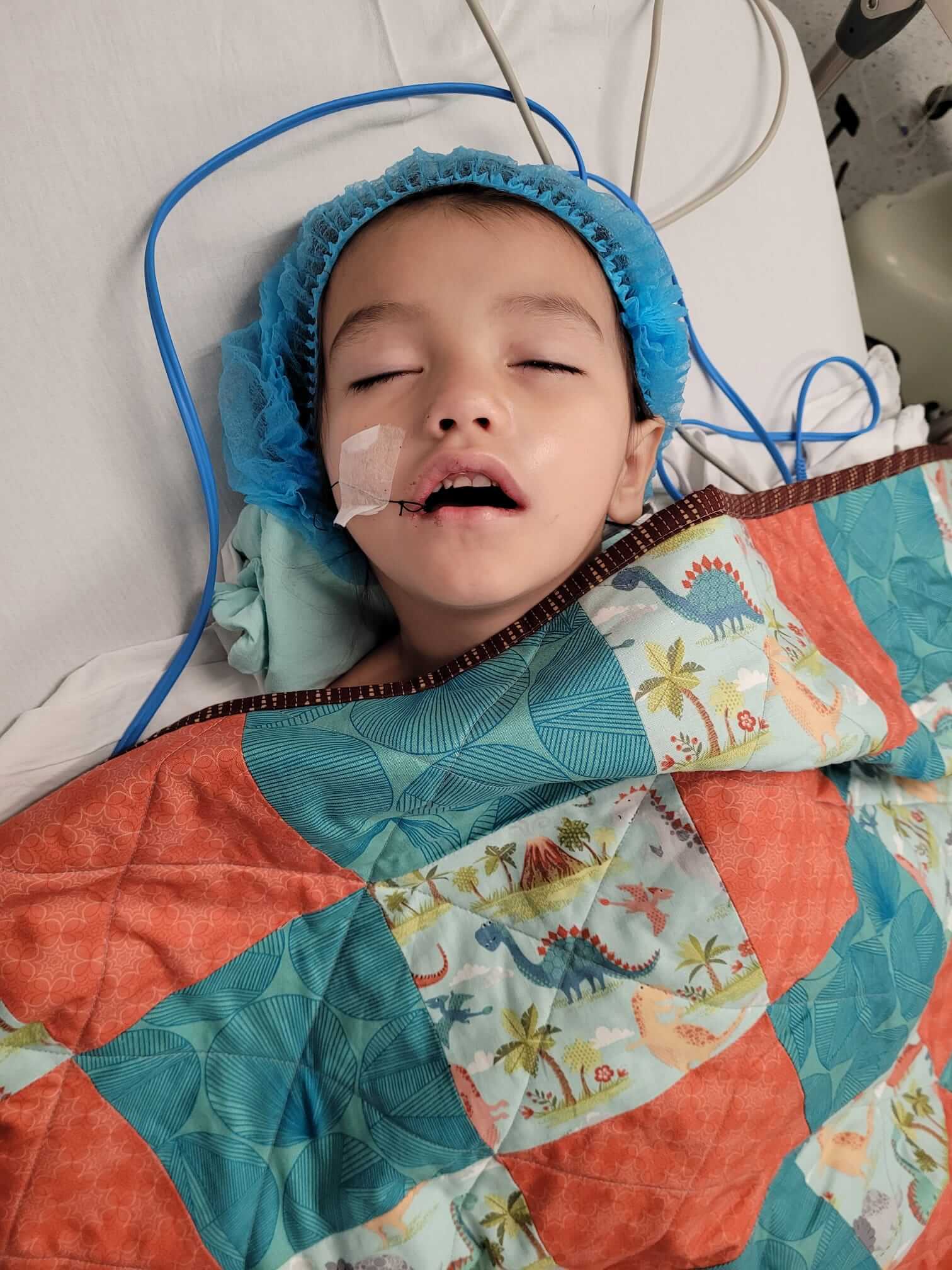 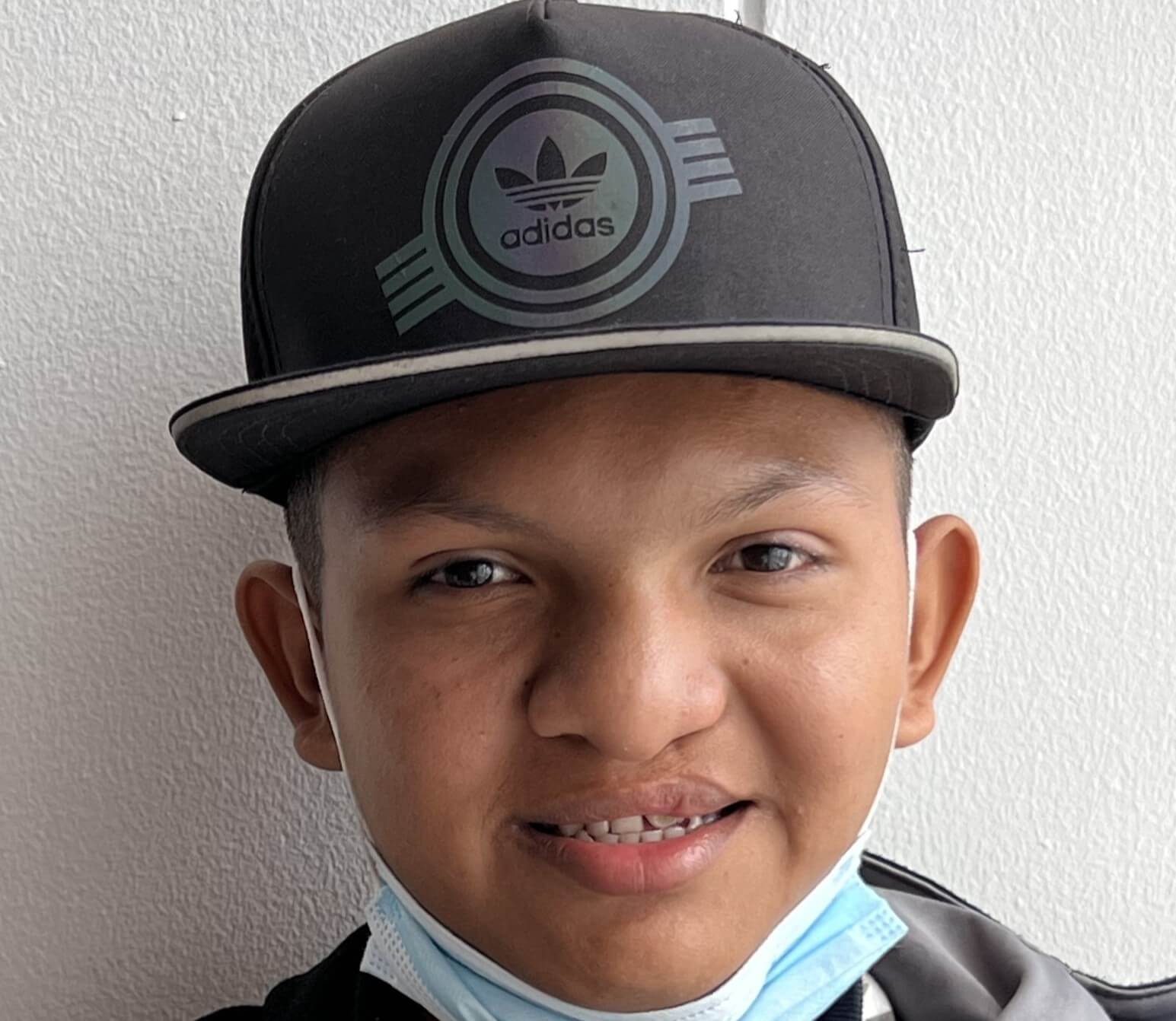 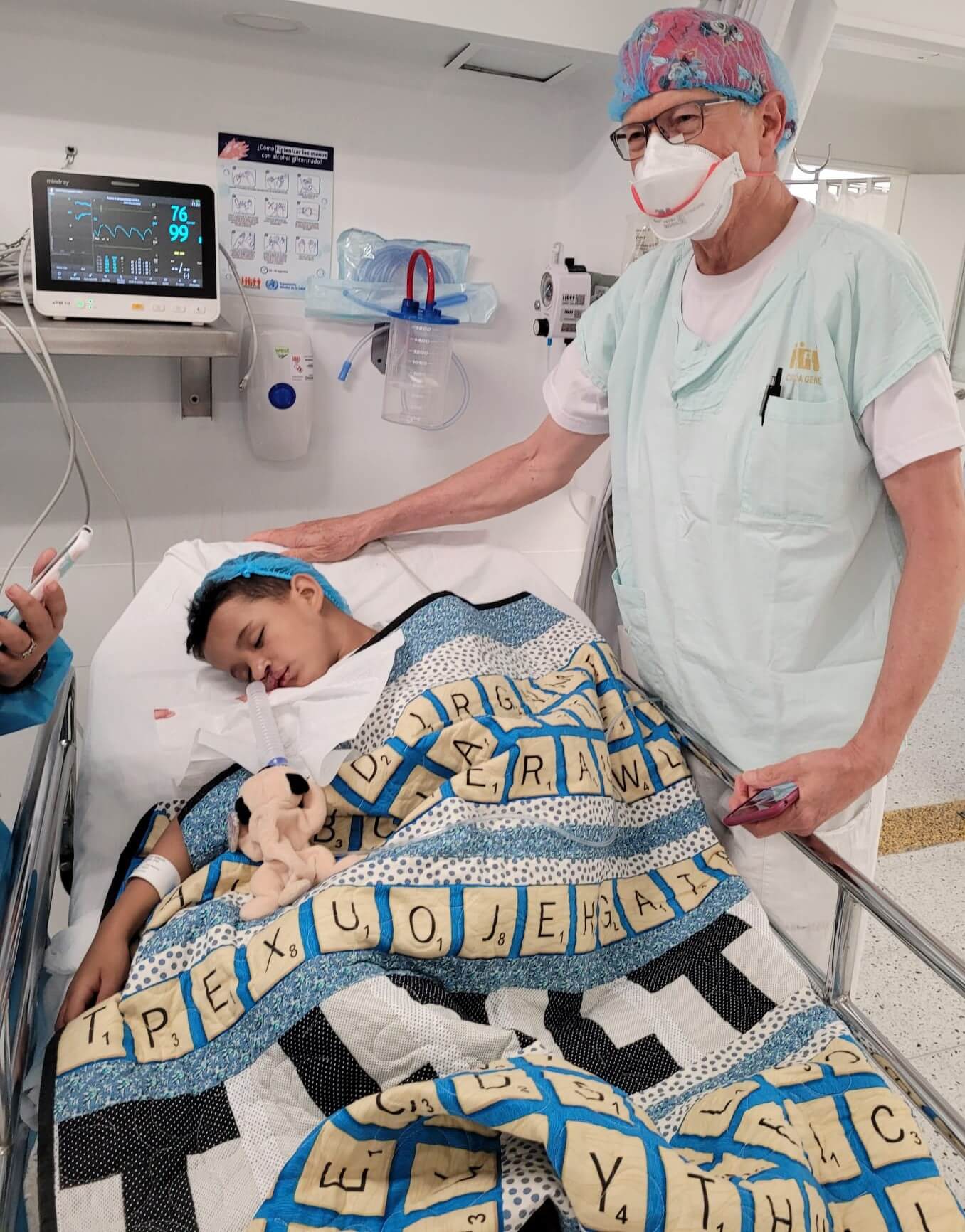 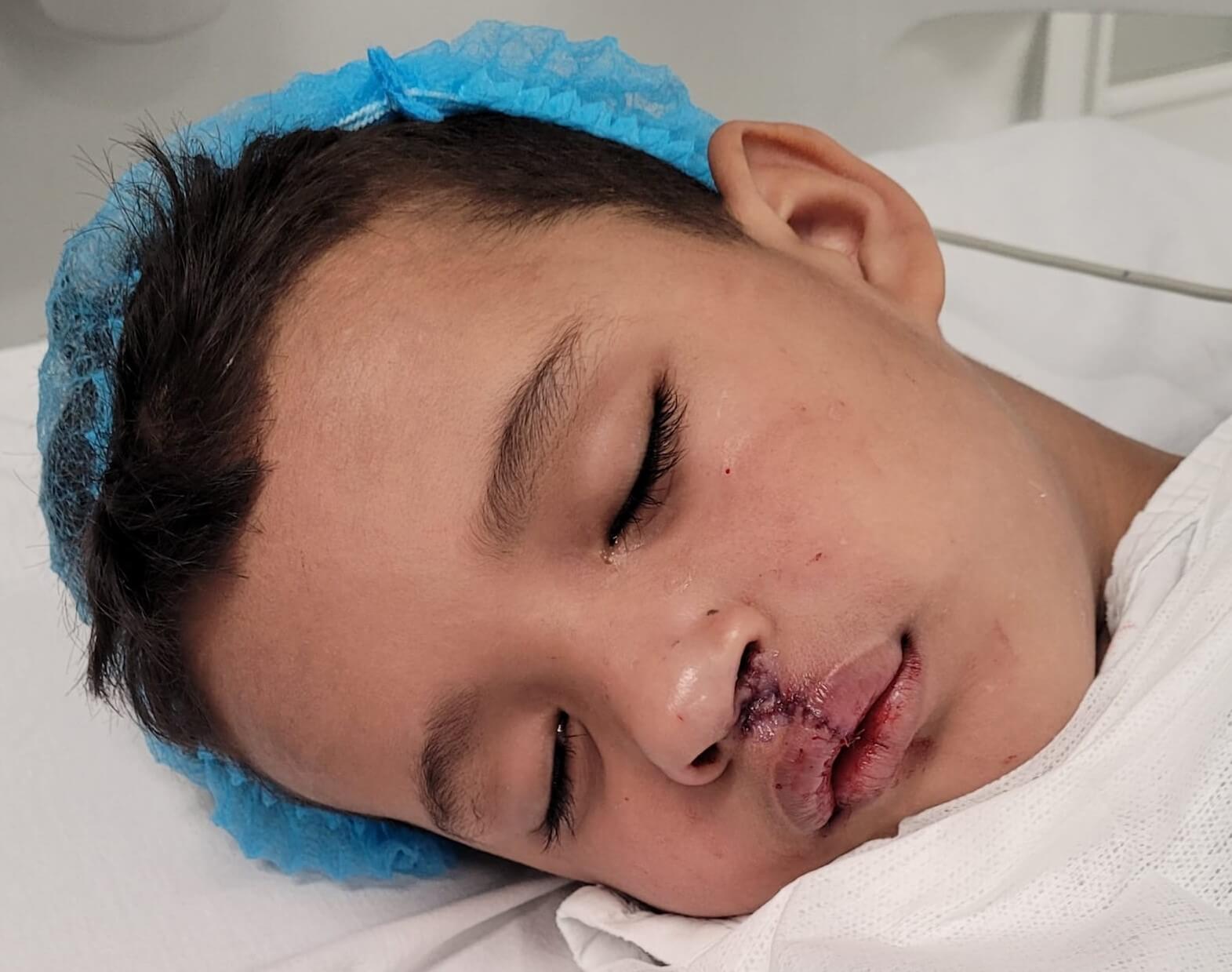 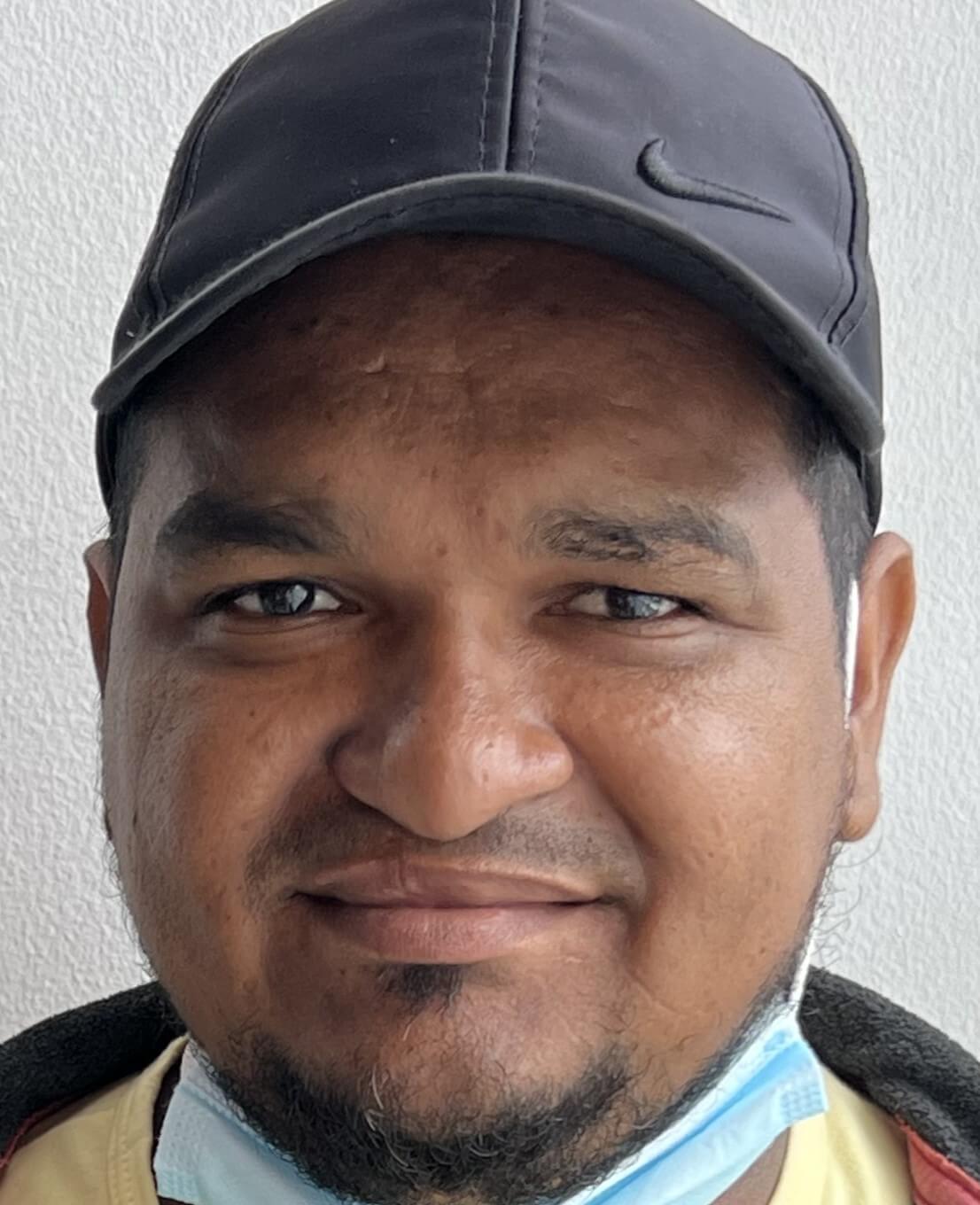 We arrived later than normal to the hospital due to COVID testing of our team (at 7:30am).  We were surprised, and a bit guilty, when we entered to a round of applause from the patients scheduled for surg... Read More »

This is Sunday and our only day off during this mission.  However, the surgeons still had rounds to make at the hospital to check on patients that were admitted for the night.  There were four of them. S... Read More »