Travel day for some, work for others- Sunday 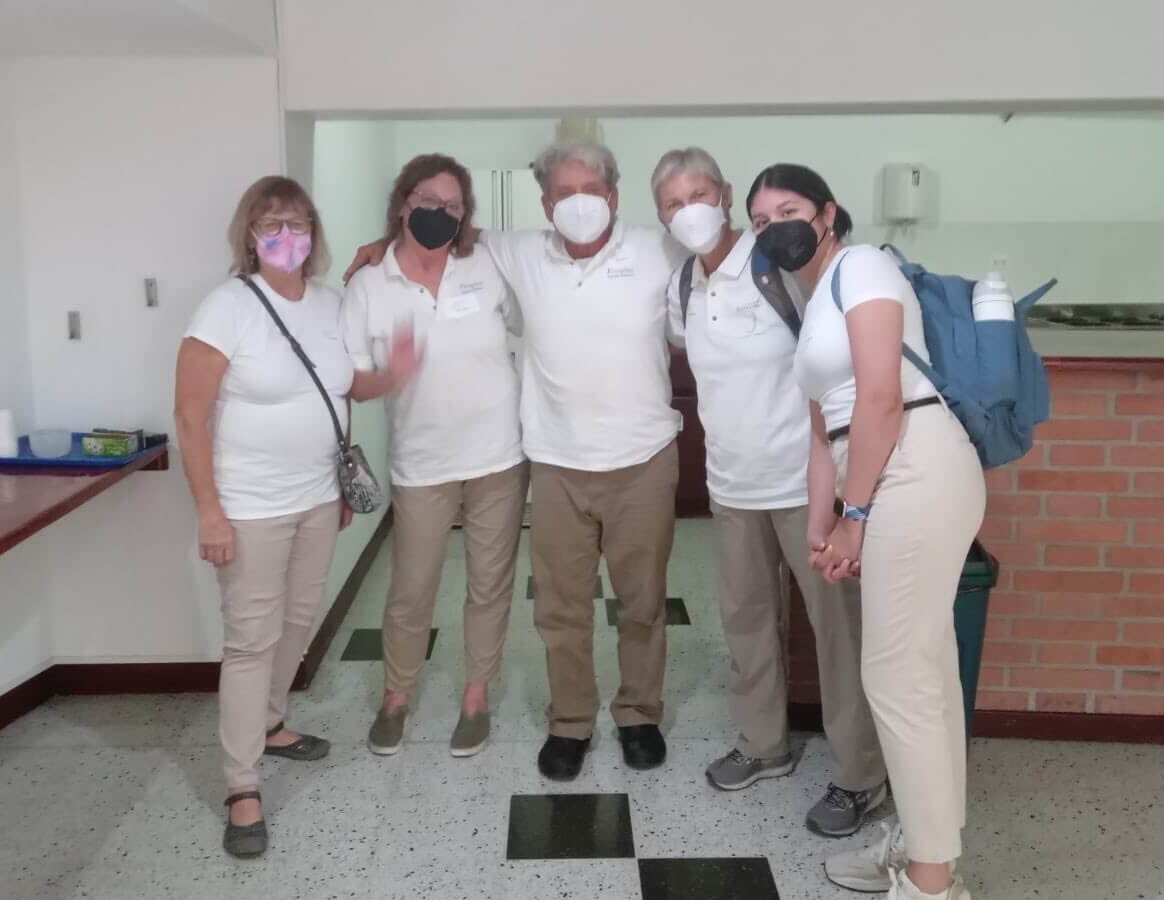 This is a dedicated group of volunteers with service hearts.  They jumped through hoops and dealt with troublesome websites getting all the paperwork done for their Visas and immigration but never gave up.  Our team has come from Northern California, Southern California, New York, New Hampshire, Arizona, Pennsylvania, and Massachusetts.  The team members from Los Angeles, Arizona and Pennsylvania are the only ones that did not experience issues with flight delays or cancellations.  Our last group arrived around mid-night last night.  One member is not arriving until tonight due a paperwork issue.  Yet we are all eager to get started bright and early tomorrow morning at the hospital. 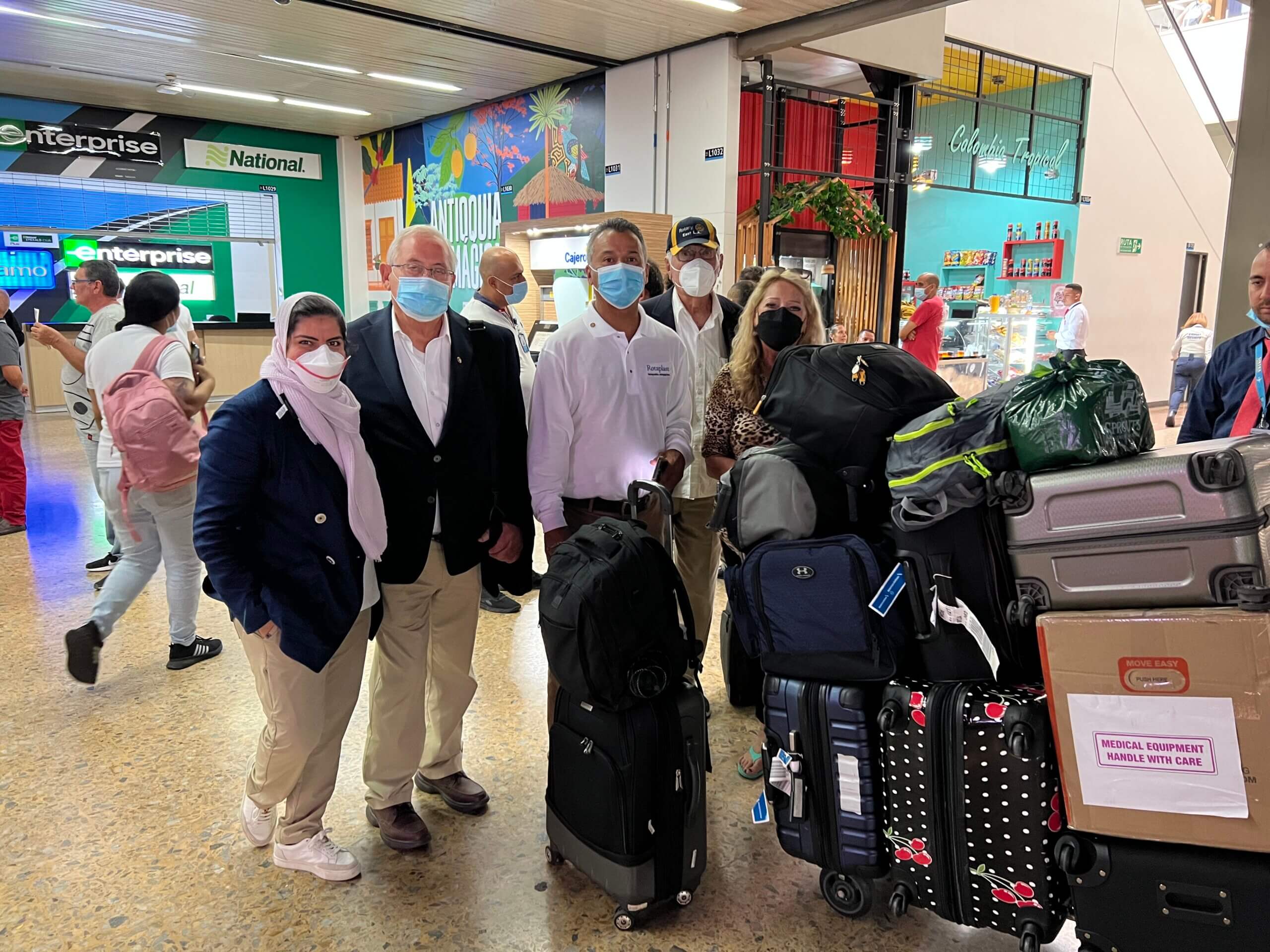 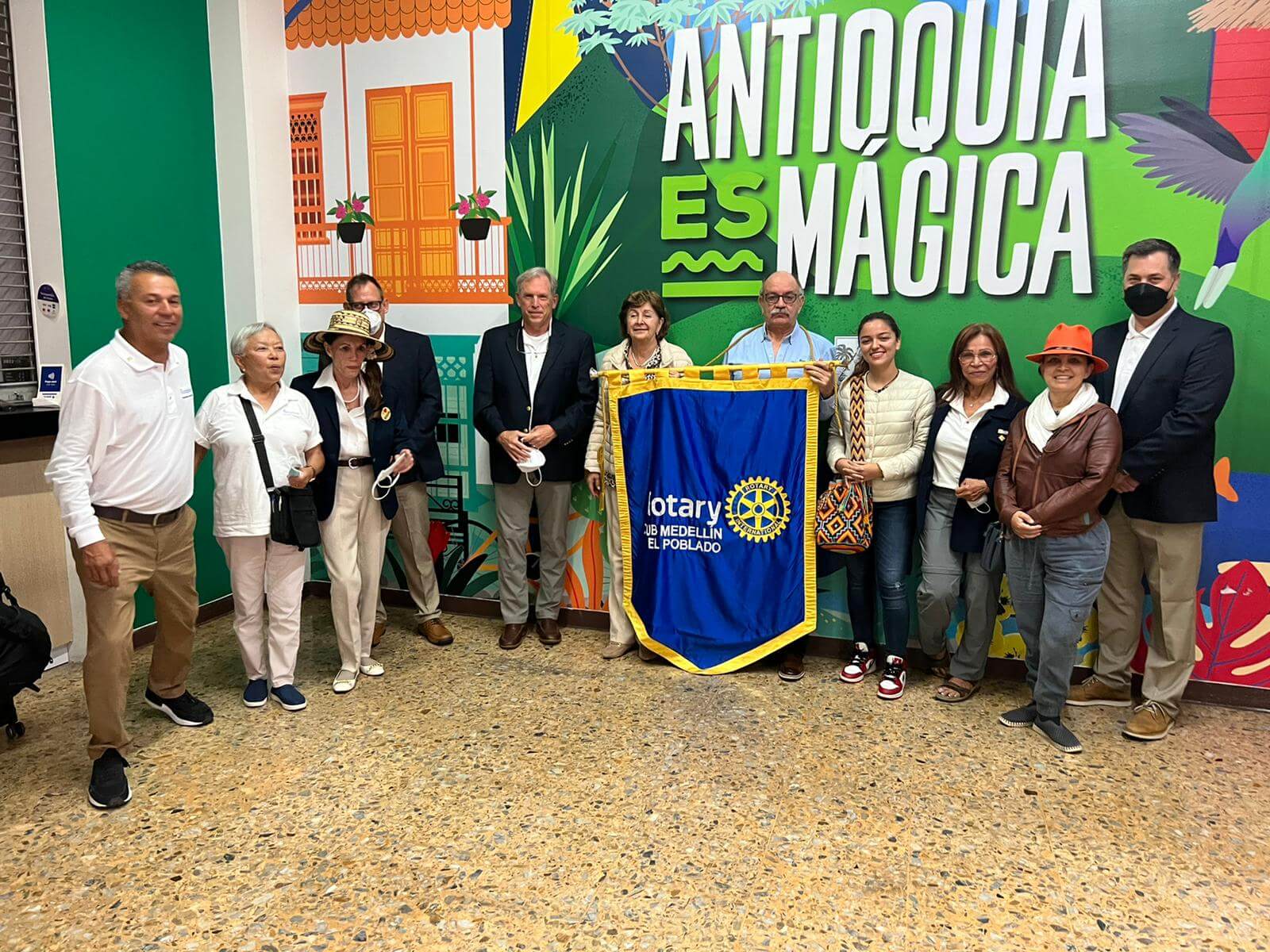 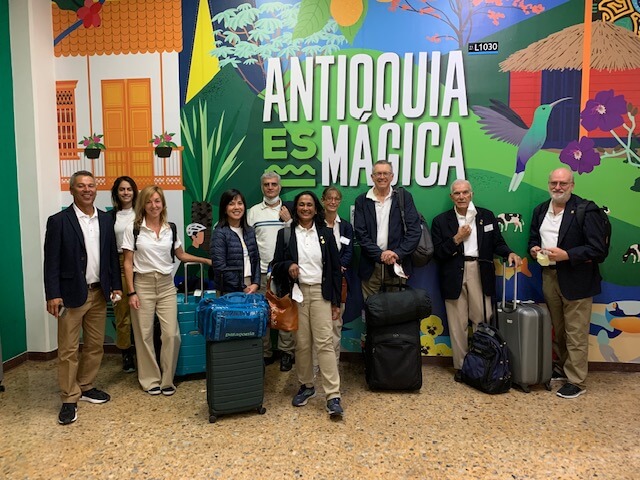 The Rotary Club Medellin El Poblado greeted one of our groups as they arrived at the airport.  Their hospitality extends past being a wonderful welcoming committee.  They are also supplying bottled water to our team at the hotel for our entire stay.

Four of our team members: Anne DeLaney, MD (Mission Medical Director); Ted Alex (Mission Director); Paula Rand, MD (Mission Lead Pediatrician); Carol Hager, RN (Mission Head Nurse), arrived Saturday.  While the rest of us were travelling to get here today, they were getting the lay of the land at Hospital General de Medellin and making sure all supplies were here.  All of these members are seasoned Rotaplast volunteers. 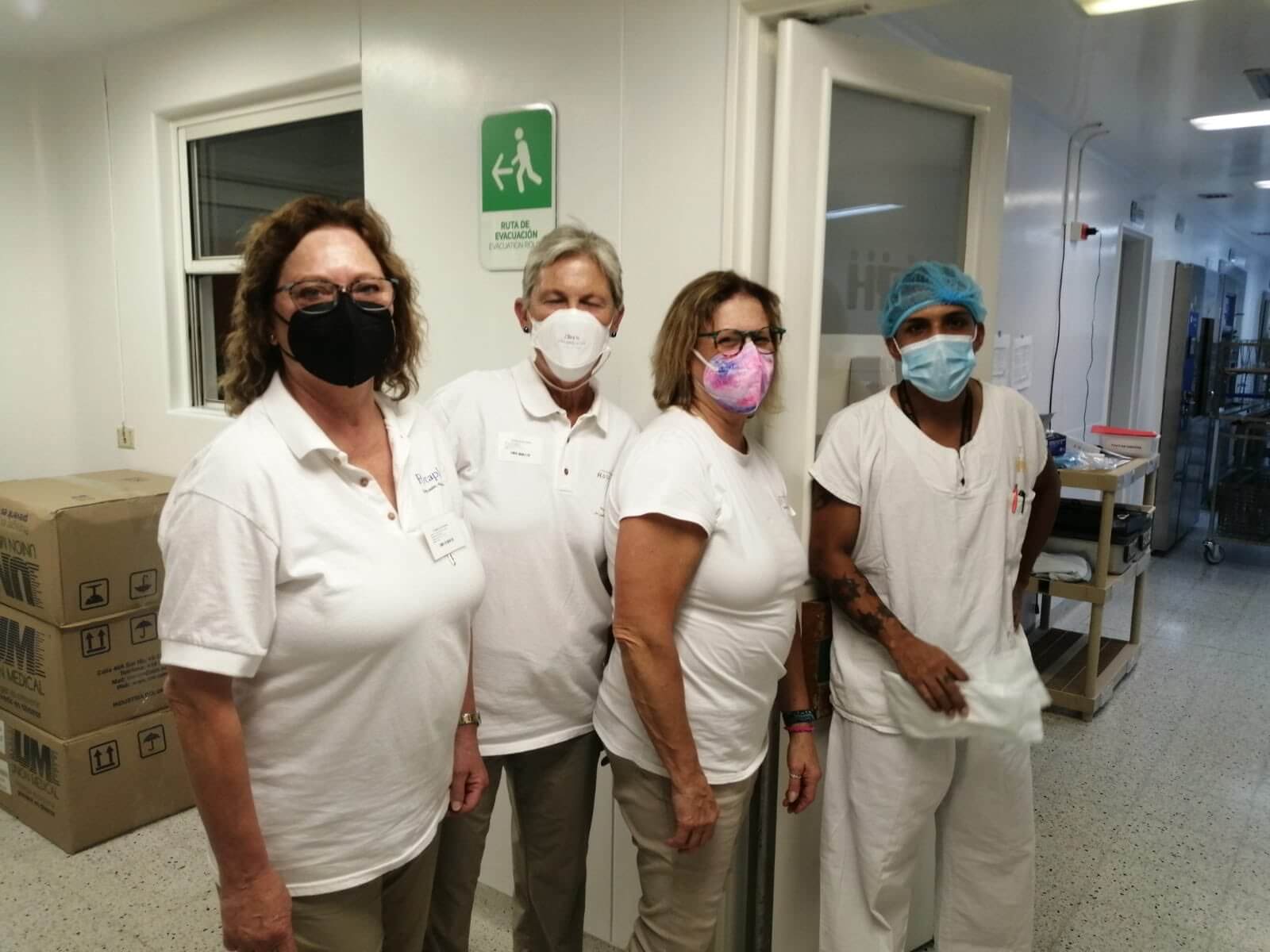 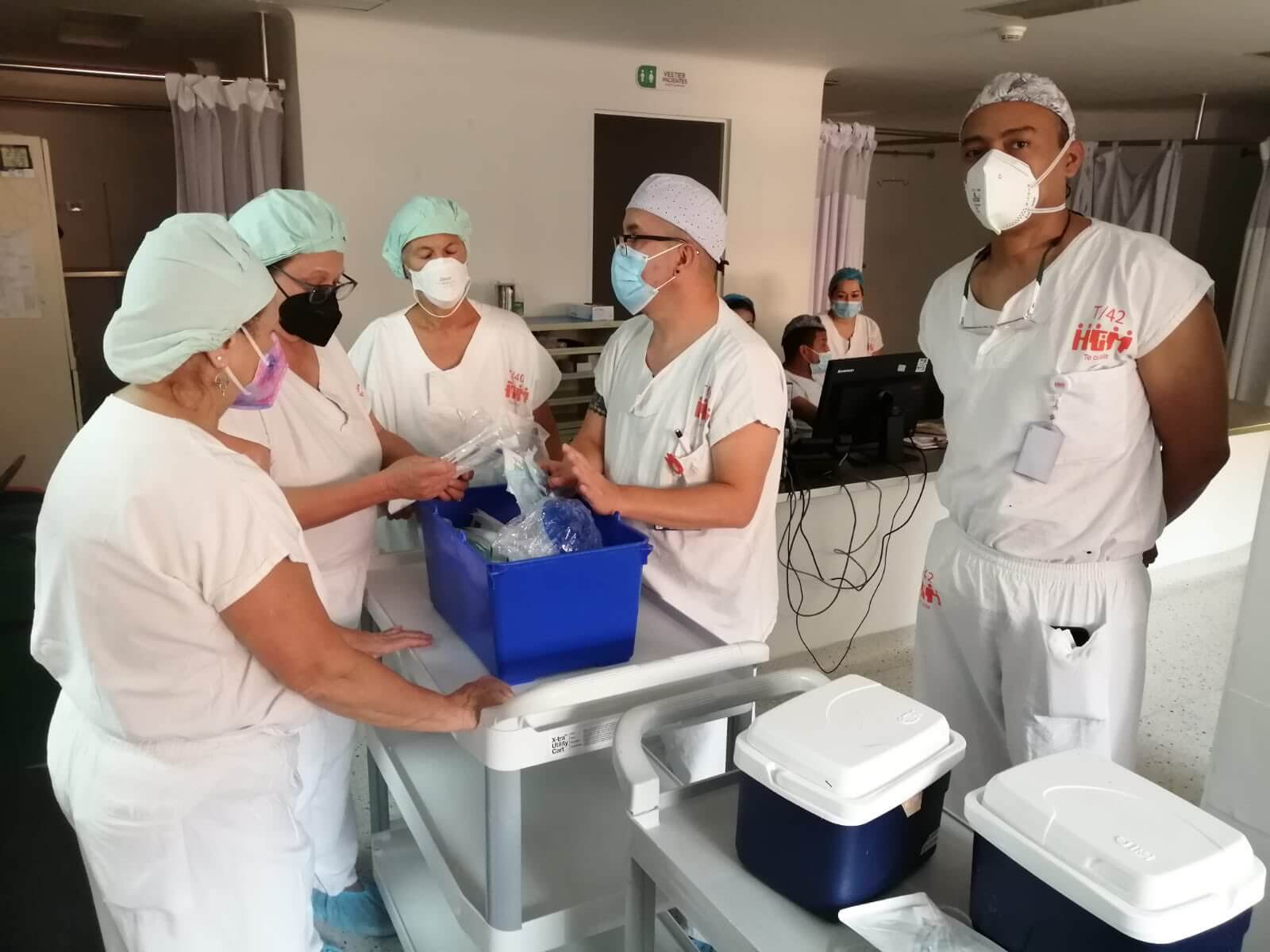 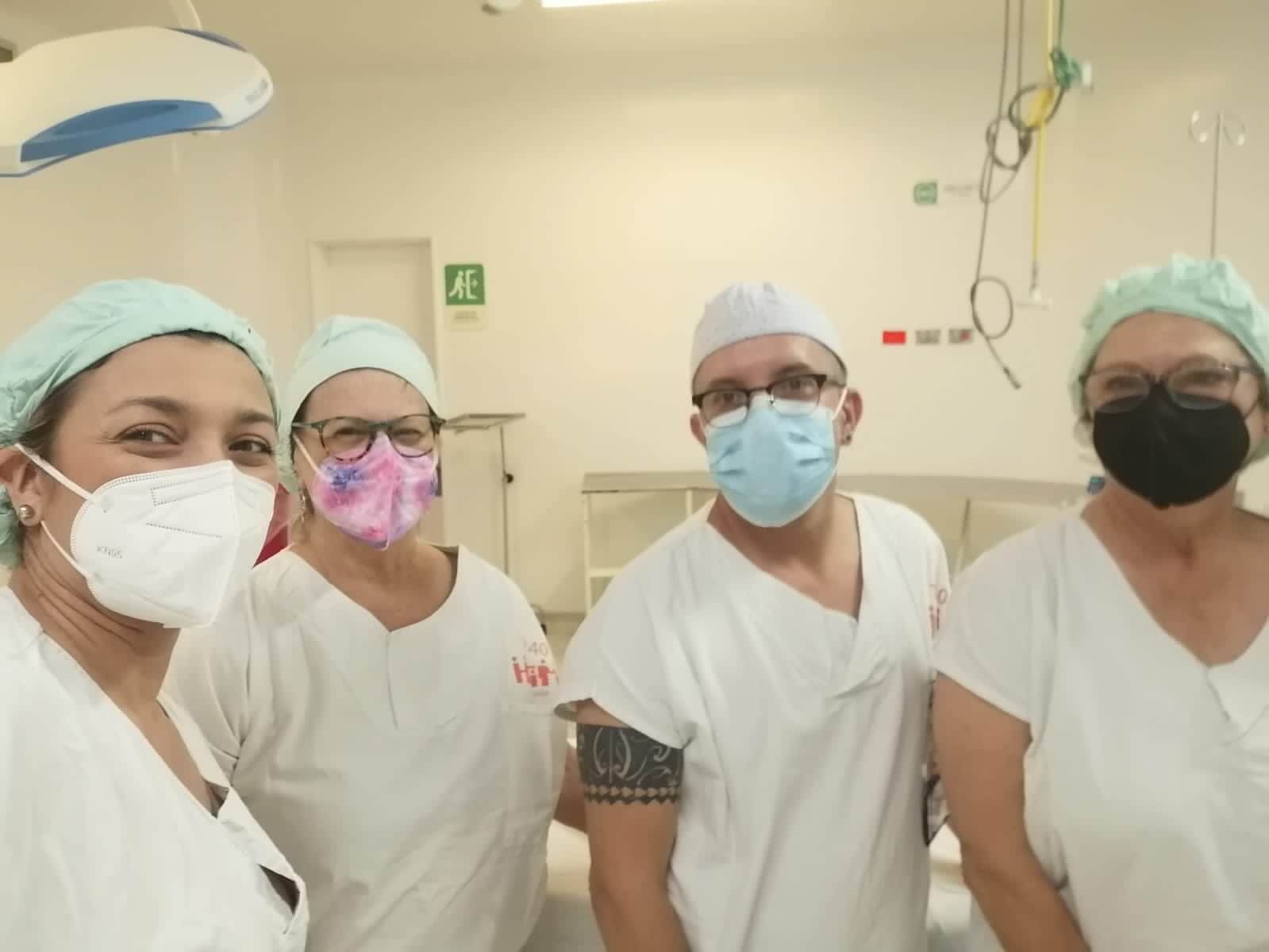 Dr. Anne Delaney is from Northern California.  She trained as a plastic surgeon with Rotaplast co-founder, Dr. Angelo Capozzi.  At his urging, she went on her first Rotaplast mission in 2003 to Venezuela.  Since then, she has gone on 15 more missions, many as the Mission Medical Director.  She joined the Rotary Club of Terra Linda in 2006 after an older Rotarian on a Rotaplast mission moved her with his passion for service and talk about his Rotary Club digging wells in Africa.  She thought, I want to be a part of this group.  Dr. Delaney served as World Community Chair for her club which sponsored a Rotaplast mission to India in 2011. She was named Rotary District 5150’s Rotarian of the Month for her dedication to service.  She is the President-Elect of her Rotary Club and is already planning for her year as president next year.

Ted Alex has been on about 15 Rotaplast missions, he lost count.  He has done most of the non-medical positions and this is his second mission as Mission Director.  The first time was December 2019 to Narnaul, India.  This retired property management business owner now does fishing charters and scenic tours out of Rye Harbor New Hampshire.  He became member of the Rotary Club of Portsmouth New Hampshire in 1991 and was club president in 2003-2004.

Carol Hager, RN lives in Pennsylvania where she retired from nursing after over 50 years.  She has been doing medical missions for about 28 years.  She had gone on an impressive 30+ trips.  Before volunteering with Rotaplast, she was with another organization. She has been to South America, Tanzania, Egypt, India, Bangladesh, and Mexico.  Carol’s position has been circulating nurse but primarily head nurse.

Dr. Paula Rand is a pediatrician in Arizona.  She has been on several trips with Rotaplast.  She has gone to Guatemala three times, Peru, the Philippines, and to Columbia.  Her job as always been the pediatrician.  These Rotaplast missions combine her love of travel, kids and her desire to help others.  She isn’t a Rotarian, yet.

I am Bonita Ramos.  I am a member of the Rotary Club of Claremont, CA.  I was president of my club 2017-2018.  This is my first Rotaplast mission.  I work for a non-profit working with children and adults with physical and developmental disabilities.  What Rotaplast is doing touches my heart.  I hope to join future missions as well.

We are all excited for our first clinic day tomorrow.

We began the morning bright and early with breakfast at 5:30am with a quick meeting to follow.  Then we boarded a bus around 6:30am and took a 15-minute ride to Hospital General de Medellin.  After check... Read More »

The day started with another early breakfast and on the bus to the hospital at 6:15am.  Upon arrival, everyone got right to work setting up our different areas.  Notice the picture of Roger Schulte proud... Read More »

Early mornings are starting to feel normal now.  When we showed up at the hospital at 6:30am, we already have a line forming outside of parents and children I recognize from clinic days.  They were excit... Read More »