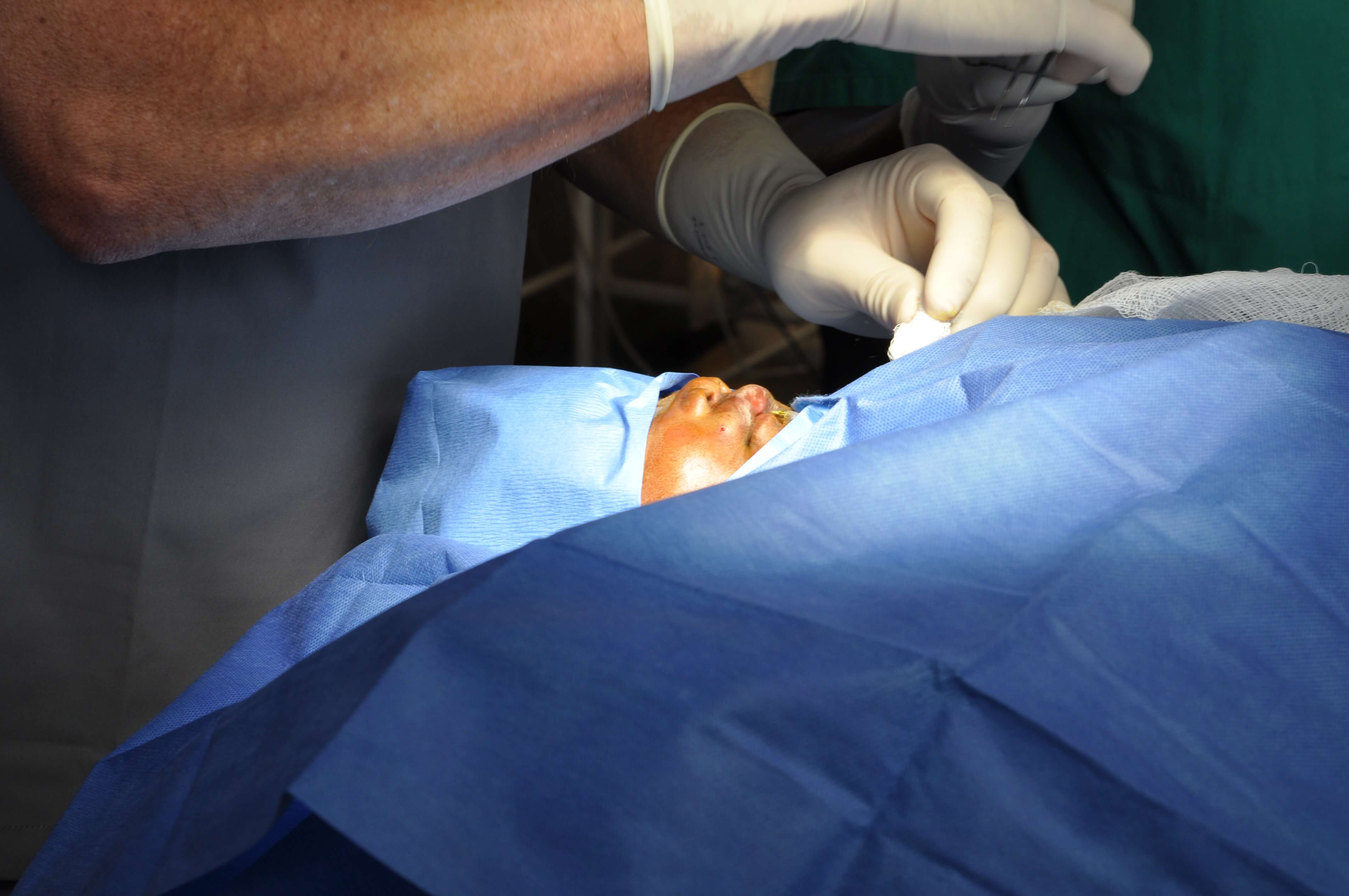 Featured photo is the first lip repair of the fourth day of surgery. Hajua is a 2 year 11 month old girl from the village of Chinya which is near and a part of the city of Mbaya about 1,500 KM from Arusha almost due-east towards Rwanda.  Her mother Miriam brought Hajua to the Rotaplast clinic in Arusha by walking to the city then taking the bus.

Hajua is readied for surgery by Stephen Carlson, MD, Anesthesiologist and OR Nurse Donna Joanise, RN 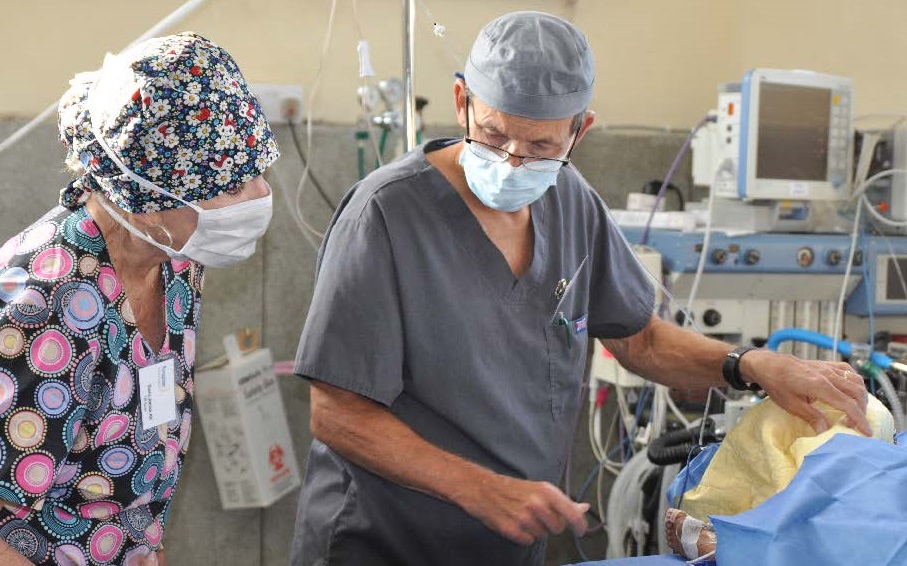 Surgeons Paul Faringer, MD and Medical Director Todd Farnworth, MD performed the repair.  They are assisted by Gertrude, an OR Nurse from the hospital.  Stephen Carlson, MD is the attending Anesthesiologist. 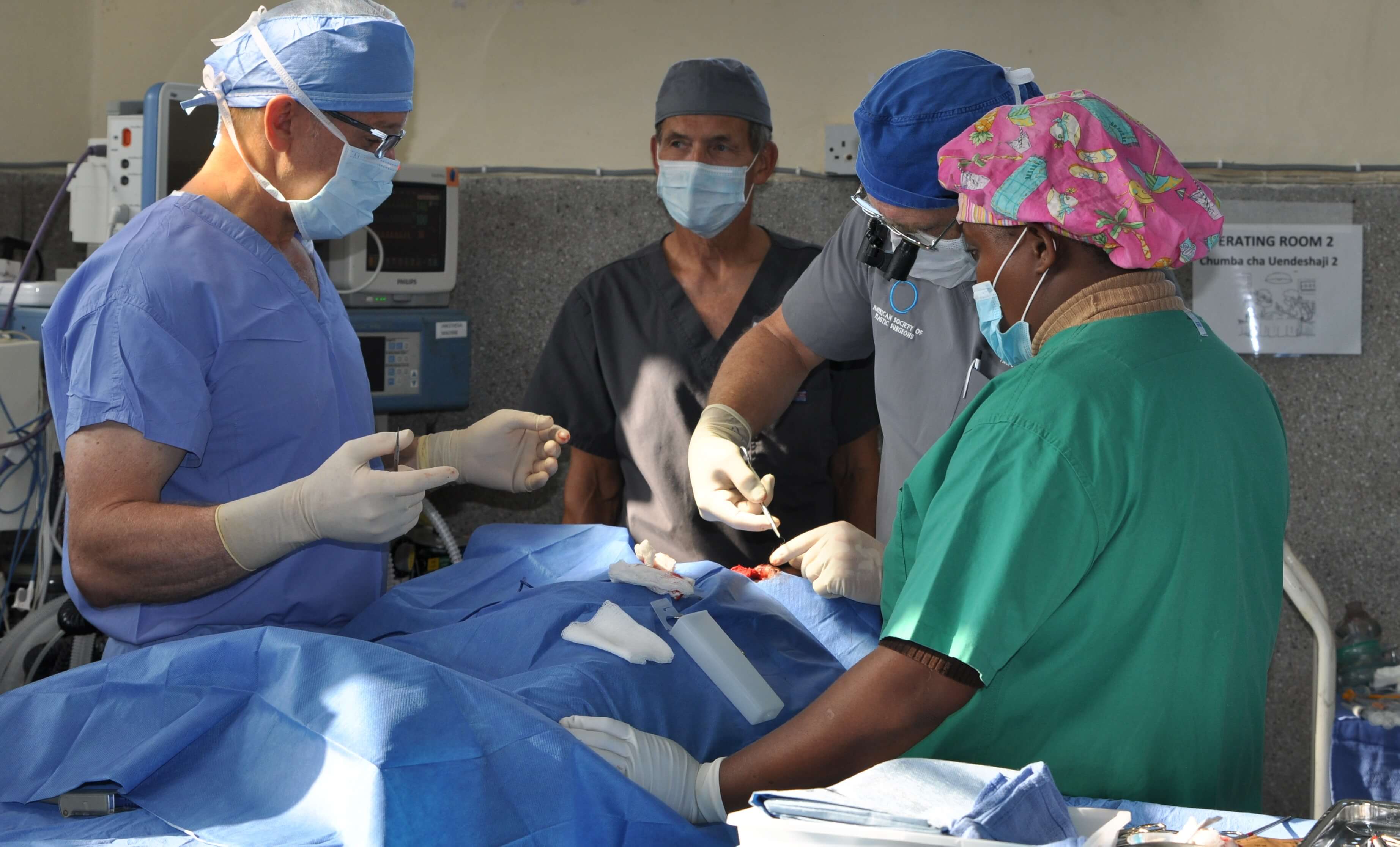 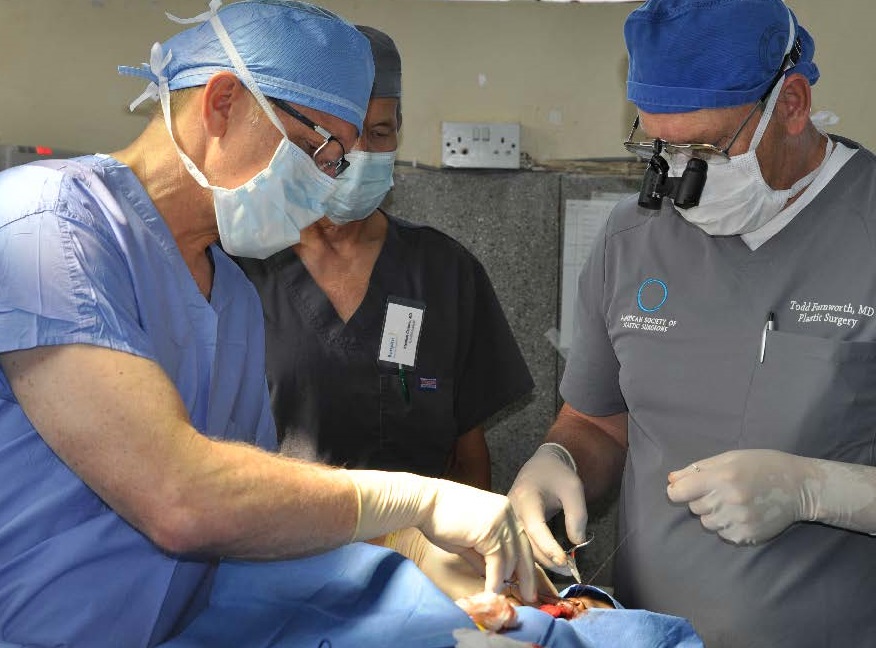 The surgery was successful, mother and daughter will be on their way home after a day of recuperation.

Anesthesiology is critical to the Rotaplast Mission, meet one of the Team members.

Dr. Stephen Carlson, MD, Anesthesiologist for the Rotaplast Team is a graduate of the US Naval Academy in Annapolis, Maryland.  Early in his naval career he transitioned to the Medical Corps of the Navy, retiring in ’93 at the US Naval Hospital in Oakland.  Shortly after retiring from the Navy he relocated to the state of Washington.  For the next 24 years Dr. Carlson worked for private hospitals retiring from a full time staff member in 2017, he continues to practice part time as well as volunteering for missions having completed five Rotaplast Missions.  Dr. Carlson believes that anesthesiology is procedure driven profession that is constantly evolving with new drugs and protocols, so it is important to continue working to stay current in the state-of-the-art. 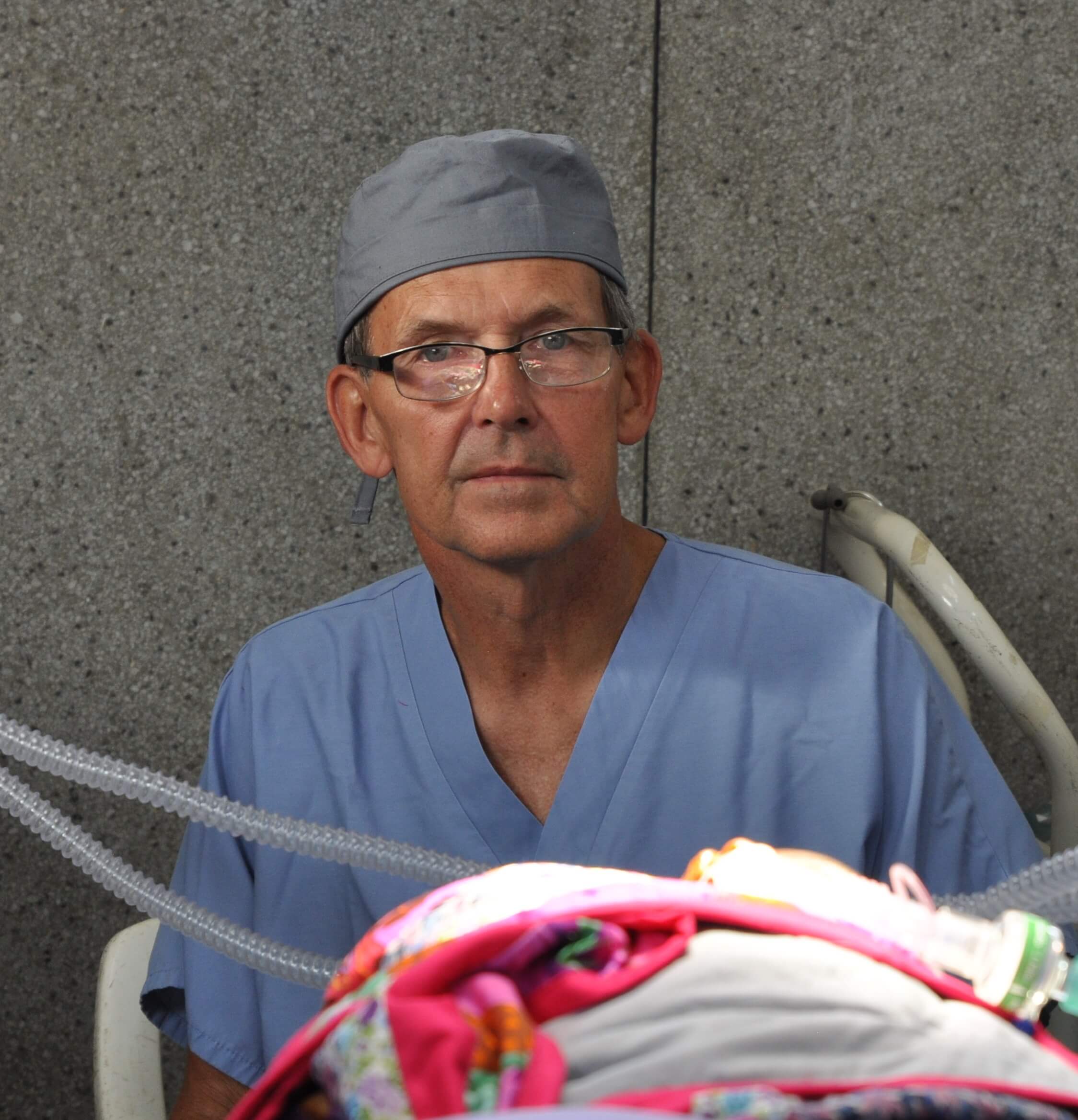 Meet Ms. “M” where Technology and Artistry Come Together.

Meet Ms. “M”, A 10 year old with severe burns on both thighs.  She lives in a village about 1100 KM from Arusha with her family.  She came to the Rotaplast Mission clinic with her mother after a 16 hour drive by bus.  Ms. “M” was burned when she was retrieving a tea kettle from an open fire where her clothing caught fire.  By the time her clothes were removed she suffered sever burns.  Pictured is Ms. “M” being prepared for a procedure called ‘split thickness skin graft’ or STSG for short. 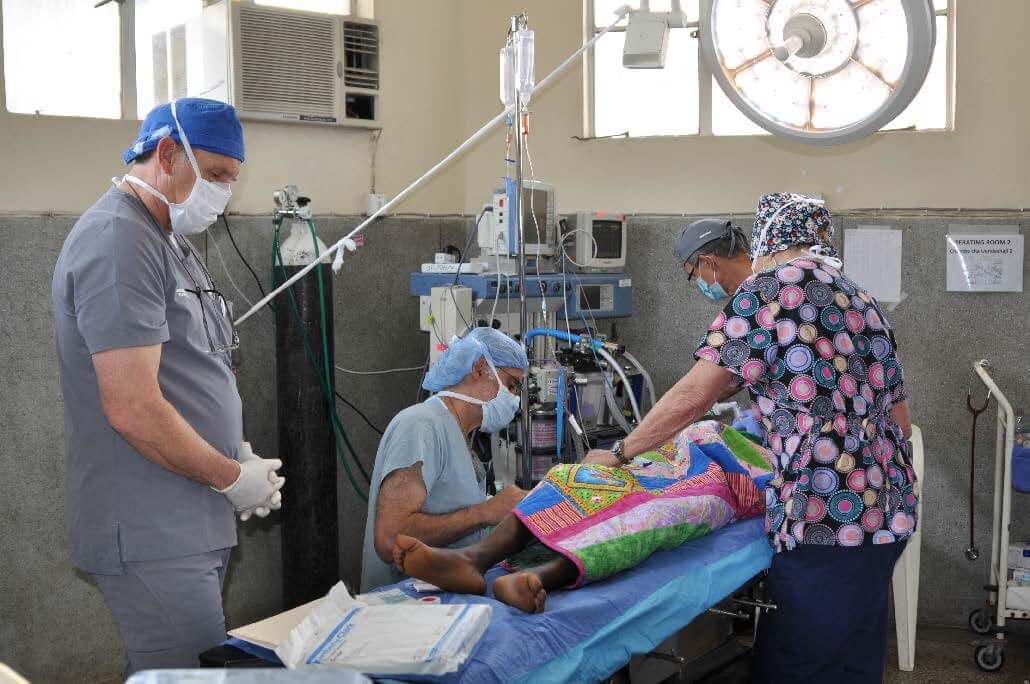 The first step in the procedure is to clear the burned skin from the affected area.  Surgeons Farnworth and Faringer perform this task. 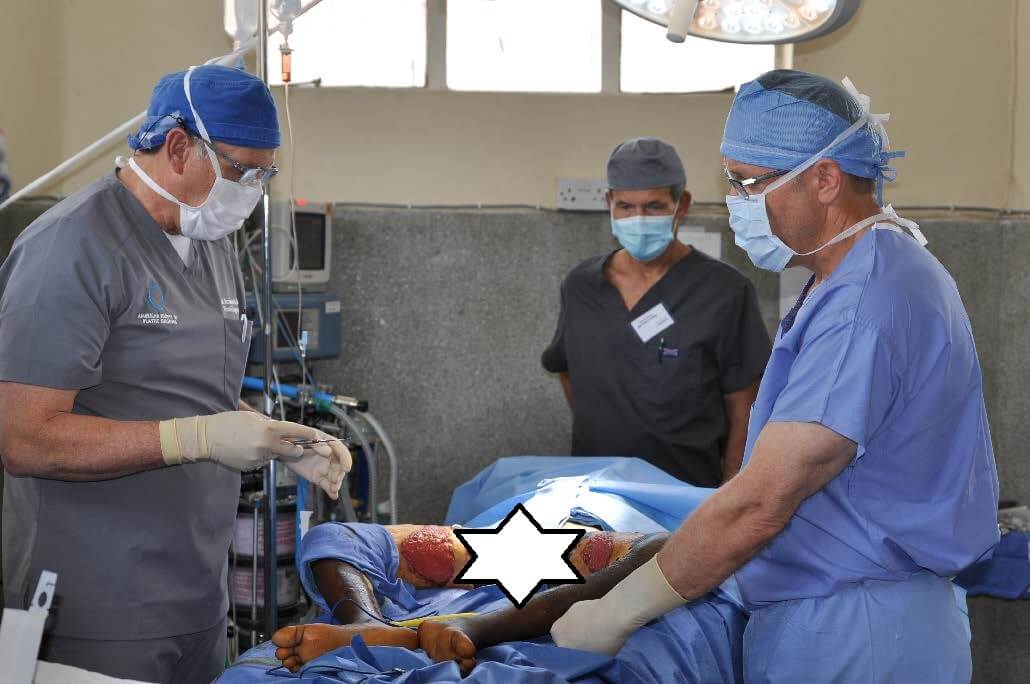 The next step in the procedure is to acquire an extremely thin layer of healthy skin from another location.  In this case they chose the lower leg area.  A machine called an Electric Dermatome is used to accomplish this task.  Set at 15/1000ths this razor sharp device provides the needed skin.  Surgeon Schepel assists in this part of the procedure. 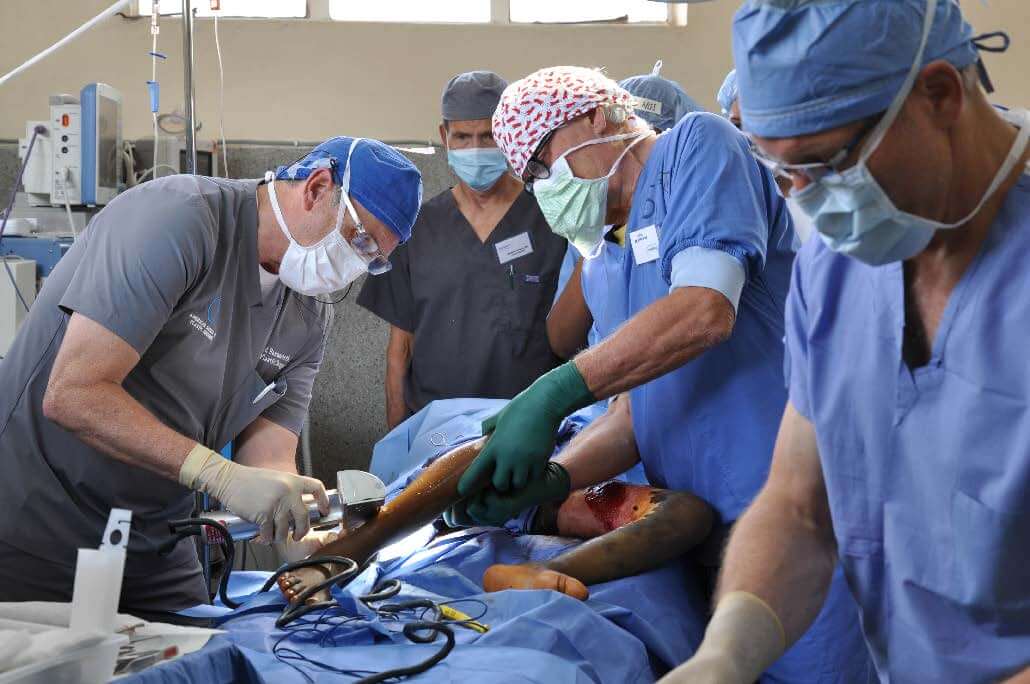 The acquired skin is then prepared to cover the area that was previously burned and now clean and ready for this new skin.  The area the skin was removed from by the Electric Dermatome will heal on its own.

Once the skin has been secured in place the area is cleaned and bandaged, once completed Ms. “M” is transported to the Recovery Room to be attended to by the PACU Team. 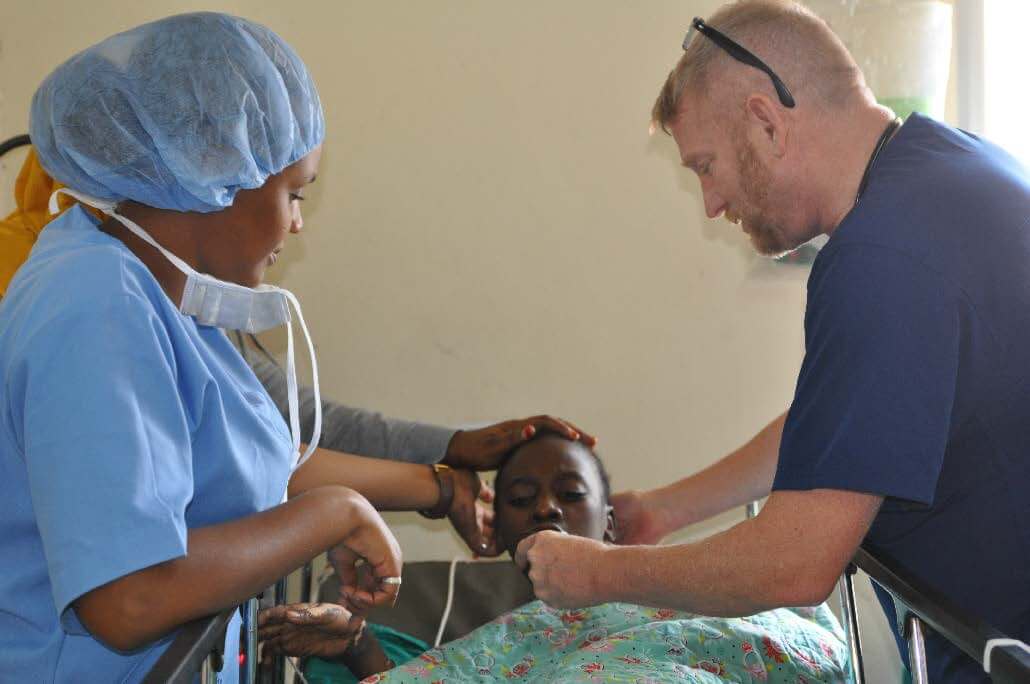 The probability of a good recovery where Ms. “M” will have full use of her legs is very high.  After a short recovery period in the hospital ward she will begin her return home with her mother.

The Team continues with surgery as the day goes on and ready to start again for Surgery Day 5 tomorrow, Tuesday 18 June.

Featured photo captures the sparkle in Dr. Tim Conahan, MD, Team Anesthesiologist face as he carries one of the youngest patients at 3 months old from his mother to the operating room. Rotaplast Arusha ’... Read More »